In the first installment of this two-parter, Chih-Yu and I had begun a day-long mini-odyssey across the borough of Queens via the 7 train, armed with only a credit card and an adolescent sense-of-adventure. To catch you up in-a-hurry, Queens is home to the Mets, and also a vast, mysterious patchwork of neighborhoods, home to people from a multitude of different cultural backgrounds, many – luckily – with amazing food. In the morning, we visited one of Flushing’s premier dim sum banquet halls, and stopped into a small tea shop that’s a branch of a Taiwanese treasure.

It’s hard to find anything negative to say about the Mets’ shiny new home. It’s infinitely more classy than the monolithic new Yankees stadium (though try convincing a Yankees fan of that). It looks like a ball-park-of-old, with its regal red brick exterior and sexy archways. Bleachers in the outfield, instead of soccer-stadium-style encirclement, allow a great view out the sides. It sits on a dramatic patch of land as well, with Corona Park and the Arthur Ashe Tennis Center to the south, the ruggedness of a junkyard, with Flushing just beyond, to the East, and LaGuardia and the Bay to the north. All that’s visible from the bleachers. But skin-deep is where the resemblance to old-school ball-parks ends. Get inside, and Citi’s more like a luxury shopping mall that incidentally contains a ball game. Giant escalators carry you effortlessly from the lobby to the upper decks, where you’ll find wide, ergonomic corridors and easy-to-access seats, all with an amazing view. Slip out to one of the promenades and you’ll find microbrews, Shake Shack, Two Boots Pizza, Blue Smoke Barbecue, and, yes, a metric ton of Nathan’s Famous Hot Dog stands, many of them on open-air plazas with sweeping views.

This is not your father’s ball park.

It’s hard to find anything negative to say, but maybe we’re losing the spirit of the game just a bit by making it “too easy” to enjoy. Every creature comfort is satisfied, and the feel of the place is rather corporate. Huge HD screens play the “let’s go” music between at-bats, and a few members of the crows half-heartedly follow along. This is a far cry from the Hanshin Tigers of Osaka, where fans with matching noise-makers pack into the cramped bleachers elbow-to-elbow, cheer together, and nobody leaves until it’s over. It’s more like visiting a museum. But this is the new age of baseball – convenient, gourmet, low-impact.

Luckily the rest of our day takes us deeper. Ten minutes toward Manhattan on the 7 train is Sik Gaek. 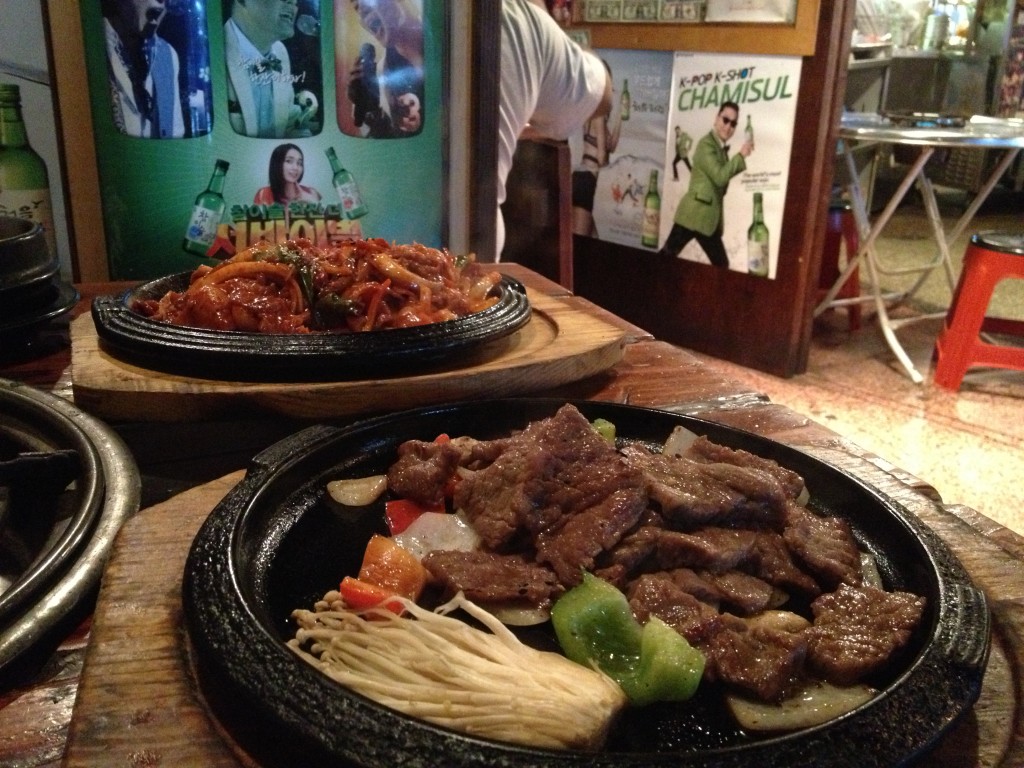 A picture is worth a thousand words, and the cartoonish visage of Psy – the Korean rapper whose song still creeps into my head if I’m not careful – shilling for Soju on one of the hundreds of posters on the wall, while heaping plates of barbecued beef and pork sizzle in the foreground, says about all you need to know about Sik Gaek. The windows are boarded up, deliberately, and the entire place is painted black. From outside, it more closely resembles a strip club than a barbecue joint. You enter to a chorus of “hellos” in Korean. (At least that’s what I assume they’re saying.) A crack team of waiters outfitted with secret-service earpieces executes a well-choreographed ballet with ludicrously-sized hot platters of food, dodging clients by just inches as they dart from kitchen to table and back.

The floor, booths, and tables are all polished wood, and thousands of dollar bills adhere to the walls. In the center of every table is a twelve-inch diameter gas grill. The first thing they do when you take your seat is fire up the grill and fry an egg. It does the trick, taking the “edge” off the hunger. Chih-Yu and I sample mostly from the “turf” category (no live octopus on this trip, though it gives us an excuse for a return journey), though a savory, melt-in-your-mouth mackerel manages to sneak its way in. Robust beef short ribs are delicious any way, but best wrapped in lettuce. The pork is grilled with kimchi, and tastes sweet, spicy, and fatty in just the right proportions. Instead of rice, we have a macabre-looking bowl of rice cakes in red pepper sauce. Sik Gaek is exceptional even for a neighborhood known for great Korean food, which, I argue, ranks it among the best restaurants in New York.

Soju, the most recognizable varietal of Korean hooch, is an integral part of the Sik Gaek experience. After years of watching Korean shows on basic cable (it’s better than CNN), I became obsessed with soju. What is this delicious beverage everyone’s slogging-down by the bottle-full as they nosh barbecue on the side of the road at 3am in the winter? Did it taste sweet and aromatic, like sake, or pungent and stiff, like Japanese shochu (with which soju should never be confused. They should be pretty easy to keep straight, right?) I finally tracked down a bottle of the stuff at an H-Mart, chilled it, and cracked it open to discover it tasted like…watery vodka.

Like every acquired taste, soju grew on me. The Russians were onto something with vodka, a perfect counterpoint to spicy food and cold weather. Now imagine a lighter version. Confronted with mountains of roasted meat, it’s hard to imagine saving room for beer, but soju goes down easy. I’ve also invented a rule-of-thumb – the prettier the model advertising it, the less likely it is to be good. (Though practically everybody is advertising Jinro – kind of the Budweiser of Korea.) The female models, pop-stars, and actors tend to hawk the sweet stuff, which contains high fructose corn syrup. I like to keep it simple. Which makes Psy pretty much the perfect spokesman.

From the frenetic energy of Queens Boulevard in Woodside, beneath the 7 train tracks, we transition to the more staid Long Island City. It wasn’t always this way. When I first moved to the city in 2001, Long Island City was the place locals told you not to get lost, especially with large denominations of cash on you. Twelve years hence, and high rise condos you-can’t-afford are sprouting like mushrooms, and LIC is kind of the bedroom community for the UN and banking district just across the river. 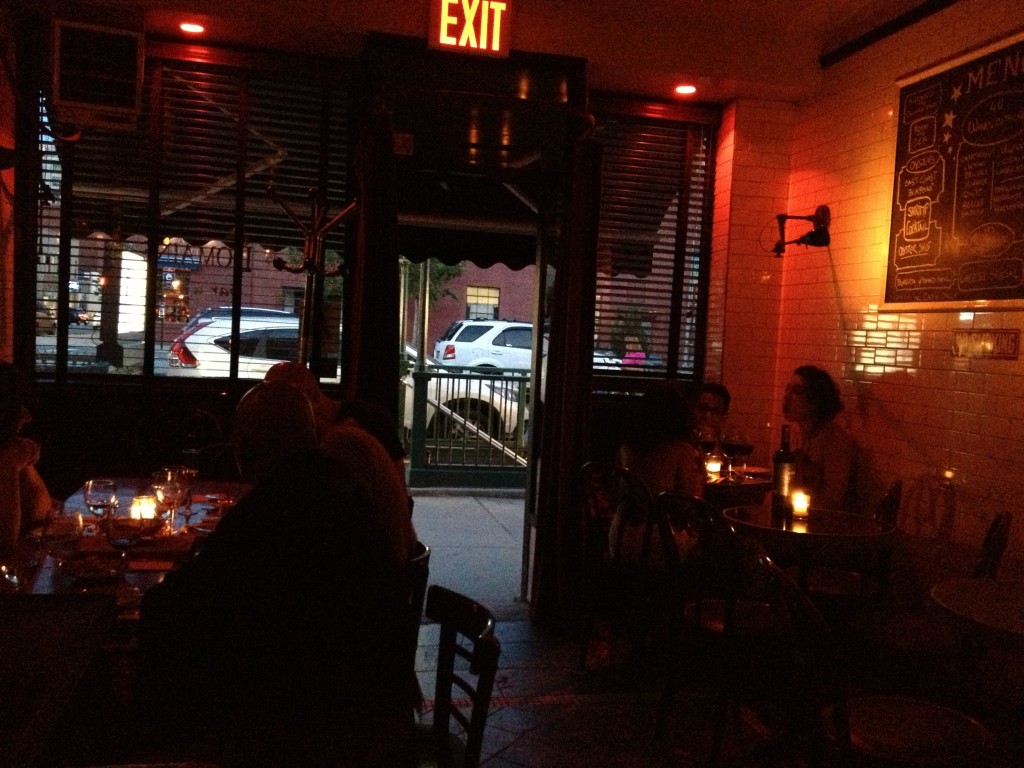 Somehow it’s retained some of the old “punk” flavor, though. The new-construction units mostly just grabbed up the waterfront property at Gantry Plaza, blocking-the-view-of – but not razing – the pre-existing vinyl-sided and brick buildings that are home to the neighborhood’s mainstays. Case-in-point: Domaine Bar a Vins, which despite its name being in French, is about the least pretentious wine bar you can imagine. It’s got tile walls like a speakeasy. Depending on who’s tending bar, you might hear Bob Marley, Johnny Cash, or Billie Holiday blasting from the speakers. There’s not a stick of mahogany to be found, and the clientele gives the place the feel of an off-the-beaten path nabe joint, not a foo-foo tourist destination.

It’s worlds away from Flushing, the Mets, and Sik Gaek, and that makes it the appropriate spot to cap off the night with a couple of glasses of reisling and a small plate of oysters.

Now, of course, the neighborhood is the perfect place to “get lost”, strolling its foggy back-corners and nursing a mean wine buzz. You’ve been around the world in grand style, and you haven’t even left Queens.

Nate Smith decided to become a travel blogger, and, discovering no practical obstacles save a steep learning curve for web design and the need to physically visit an exhausting array of destinations (what could possibly go wrong), he did it. Together with his wife, Nate, a musician by training and lifelong writing amateurist, founded Smart Getaways for Couples to catalog quirky stories and lessons learned from his travels. Nate has written for countless publications of little consequence, including The Lawrentian, a college newspaper, The Wondrous Nothings, a now-defunct web-magazine, and a bevy of his own blogs. Nate's latest projects include BreakingFerriss.com and the forthcoming Smart Asia Travel Blog.

One response to “Going Deep in Queens 2 – Citi Field, Sik Gaek, and Domaine”