Going Bald for God: Would You?

Babu Ghat has a vantage location that hugs the eastern bank of the historic Hooghly River in eastern India.  Now while dusk is surely the nicest time to stroll along the riverfront, mornings are when most of the action takes place.

Built in 1830, the facade of the ghat has a Doric-Greek style pavilion flanked by solid cream pillars.This ghat is hard to miss from the street, and is buzzing with pujaris (priests). Originally named ‘Baboo Raj Chandra Ghat’, it was a matter of time before locals would soon compress it to Babu Ghat. Babu in Bengali is a gentle or a refined man. And Ghat? It is simply a series of steps that leads down to a river, lake or water tank. So there you have it – Babu Ghat!

Before you step down into the river, be prepared for the black clumps of human hair which could wedge themselves firmly into to the soles of your shoes. Hair along a riverfront — how come you might ask?

This is because plenty of male devotees get their heads completely shaved as part of their religious  beliefs. Speaking to the them, you’ll see that their reasons are not always similar. Someone craves a beautiful bride, another wants a male child, another seeks success in business. And then there are those who’ve come to give thanks for a favor received. Someone received a beautiful bride, someone’s bride gave birth to a baby boy, someone’s business took off, someones mother recovered from a deathly attack of typhoid. Death in the family is another time when men could shave their heads too.

The question arises — why tonsure the entire head?

As simplistic as it may sound, I’d relate this to Khalil Gibran’s quote on Giving:

So yes, while giving money is an easier option perhaps more practical if used to help the poor, the shorning of hair is tougher to do as it requires total submission and humility. When you offer your hair to God, you are giving of your Self to Him.

Absolution of sins is yet another reason why some devotees get tonsured before taking a Holy Dip in the river. They then proceed to bow before the deity (or the sun) in a manifestation of seeking forgiveness and attempting to become a changed person. The equivalent of being Born Again into someone new. 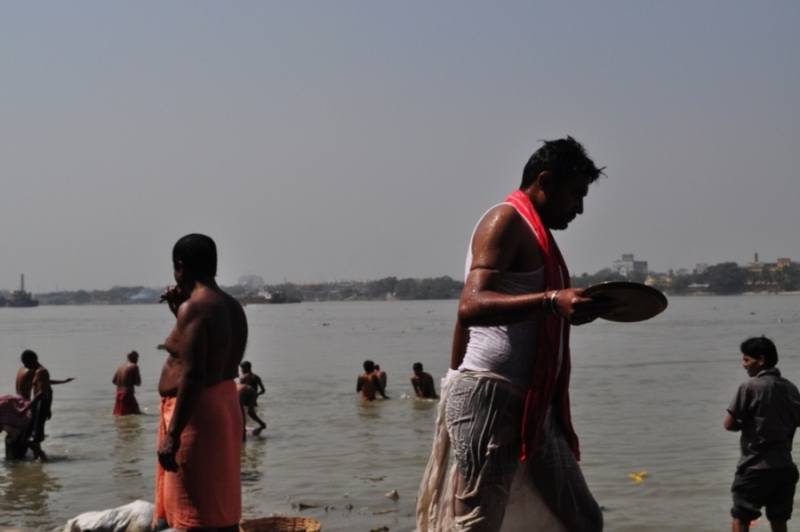 The ghat is a big hit with trigger-happy foreigners who are awestruck by the sequence of events playing out here. The devotees, priests and barbers are quite habituated to the attention they receive, and will seldom react aggressively.

French-Colombian lover of India, Colombe muses when asked whether she’d go bald for God. She says, ‘I don’t think I’d shave my head bald because I don’t have such a tradition, and more importantly I don’t believe it would make any difference. That said, I respect the deep intention of these men and women.

According to me, a judgmental vision of a God who would punish or reward is a reductive human perspective and not a God perspective if any (no religion here, I believe in the universal law of life which creates and has created everything).

So if we go back to a person who strongly believes that the moment she would shave her head, something will change in her life, than I do believe this change can miraculously happen. I don’t believe in this tradition, but if I did, I would probably shave my head.’

Regardless of your religious beliefs, would you sport a bald pate for atonement, thanksgiving or favors? While you figure this one out, here is a video of the shorning at the ghat.

One response to “Going Bald for God: Would You?”