Goddess of The North 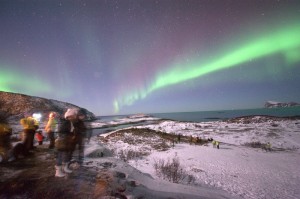 It was mercilessly cold. The Night Sky was hopefully clear. (Yes, that is the correct usage of the word “hopefully”). This was the moment of truth: tripods, cameras, warm gloves, a fire going strong, hot soup and patience. Lots of it. We had no idea how we would react on seeing one of the most spectacular sights that Mother Nature has to offer. A most magnificent show in cahoots with the Sun, which has bewildered humans for centuries.

We have grown and evolved in a world where we anticipate a sound after a flash – we anticipate “thunder” after a bolt of lightning, and “bang and boom” after a firecracker goes off in the distance. As a greenish, un-eartlhy light began emanating from the frozen mountains we gaped at it – silently it grew and grew and enveloped the sky – until it reached a point where you could not see all of it without turning around in each direction. No sound at all. It passed as silently as it had come. The Goddess of the North, The Aurora Borealis, had left us stunned. Little wonder the Auroras were associated with Gods and Demons by the early Natives.

At “just” eleven degrees of separation from the North Pole, Tromso is by and large a subnivean town. There are more under-snow tunnels, than roads. You won’t be lost for words and friendly people in Tromso though, considering that it has over 100 nationalities living in it! You can vacation here as a tourist or absorb all the culture as a traveller, Tromso has something to offer to everyone.

We started off after a relaxed breakfast in the Radisson Blu, calmly packed our thermos flasks with freshly brewed tea and got in the tour bus. Today, we had an appointment with the Auroras! The conditions to see the Auroras have to be more than “just right”. There needs to be significant solar activity, no clouds and the skies must be free from light pollution. As we were en-route to the remote island which was to be our observation point, we could see promising shades of light green in the sky – on the one hand we wished they would get stronger, on the other we were afraid that it might be the only show for us tonight. We reached our camp – the fire was lit, soup was served and then the wait started. Waiting for the Auroras is like watching the hour hand of a clock turn. You watch it, but you never know if you really saw it move. Faintly from the North East corner of the sky a glow started to emerge – snap happy tourists eagerly set their tripods in the right direction – but nothing could have prepared them for what came next. A very bright display of green flares spirally from an unknown center-point in the sky. Some of us were so awed by the spectacle that we forgot to click our cameras. When the display finally turned faint we gathered around the campfire to listen to the Sami natives telling us about the various legends and stories about the Auroras. Natives in earlier times were both scared and awed by the Auroras; the explanations ranged from the Arctic Fox touching the clouds with its fur to Souls of the Dead seeking vengeance. If you were near the North Pole two thousand years ago, and saw the Auroras, what would your story be? Listening to these stories and having witnessed the phenomenon ourselves, we felt like time had stopped. Like we could sit there forever waiting for and watching the Auroras every night, with each colour translating to a new story. The stories that were woven thousands of years ago, were still reminisced by the locals today.

Time had no meaning in a cold, rich, colourful place like this. On the surface, Tromso seems like a small city – cold in winters, not-so-cold in summers. Why would you want to live in a place like this? You know why? Because time stops here. For the Gods too.

About the Author: Arnav Sud: I have travelled the World as a Marine Engineer onboard ships – travelled much more than I have time to blog about. I like photography, adrenaline rushes and meeting interesting people!

A Hidden Gem in Green Bay
Enchanted Forest Demons of Guatemala
The Heart-Capturing City of Dumaguete, Philippines
The Silver Pavilion in Japan

One response to “Goddess of The North”