Goa Through the Eyes of a Portuguese Woman

A little history lesson before we commence. India has been the playground of the feisty European colonialists for centuries now. Most pockets were returned to the Republic of India in the 20th century. It is pertinent to note that the French have kept the soft power alive and strong in their former enclave of Pondicherry. In stark contrast, Portugal hasn’t quite managed to pull this off with Goa.

An Indian national of Goan origin, I have met numerous European travelers who spend months on end traveling through a continent of sorts called India. When I say Europeans, the French and Germans top the list followed by the rest: Spanish, Scandinavians, Italians, Polish, etc. The Portuguese backpackers have been conspicuous by their absence which led me to wonder why unlike their European counterparts, they were not attracted to karma, yoga, mantra, tantra and sari.

Also unlike Pondicherry, which is turning into a veritable hot bed for French nationals (both retired and fresh graduates) reeling from the economic crisis, Goa hasn’t managed to attract Portuguese citizens to benefit from the inexpensive Indian life.  Meanwhile, you have enterprising French nationals setting up bilingual websites (English and French) designed to attract French expats to Pondicherry. And then I met, a young Portuguese traveler in Pondy who had actually visited Goa. She spoke about how Goa was represented in school texts while growing up in Lisbon, whilst also acknowledging that the Portuguese presence is almost nil in Goa. You can find more of her travel stories on her blog With the name of Catarina Piedade, I was born in Lisbon, Portugal, where I lived all my life and worked 17 years as a civil engineer. Last year, after some short holidays in Asia and South America, I felt a growing a desire to spend more time traveling in order to have more contact with people of other cultures. So, six months ago, I decided to make a pause in my work and start my journey! Presently I’m in Nepal, after five months in India.

What I heard about Goa while growing up through friends, family, school, history books

————————————————————————————————————————————–
Even today, in schools, the history books don’t tell much about Goa; it is mentioned like they mention the other colonies. Although Goa and Damão and Diu were under Portuguese domination for many centuries, they were small and very far from Portugal. We learn that they were an important source of spices and a port in the commercial route to the Orient.
What I learned about Goa, especially in journals and magazines is more related with the process of decolonization, which is closely connected with the fascist government that ruled Portugal during 50 years.

————————————————————————————————————————————–
The Goans became Portuguese nationals because they were born under the Portuguese domination, but they were originally of Goan origin. Anyway when I grew up, I met some Goans in Lisbon who had grandparents and older relatives in Goa who they never saw, and never even considered the possibility to make such a long journey to visit them. Also by their face and the color of the skin is hard to imagine that they have Indian roots. The language connection was lost a long time ago; the only thing that remains is the food with all the spices and the famous samosas (we call it chamuças) that are a famous snack. 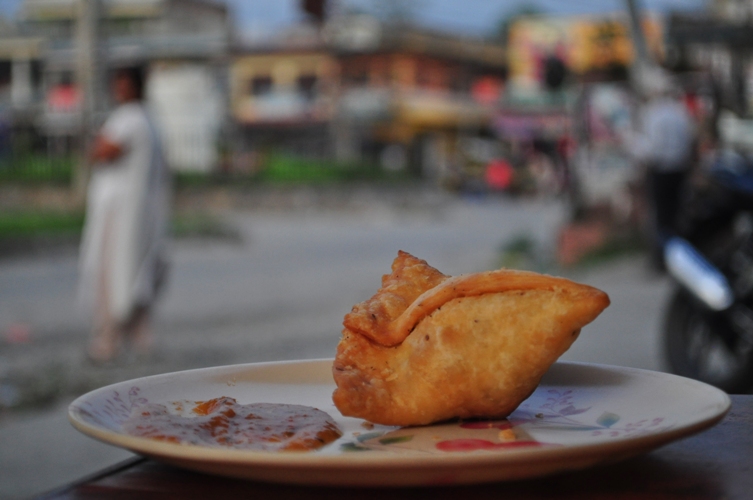 My impressions of Goa as I grew older

When I grew up, Goa was famous for the rave parties and trance music, which completely changed the scenery, becoming, in my imagination, a place of hippies. Most of the people that I met who visited or even lived in India were from other Europeans countries, and weren’t really concerned about the culture or traditions. ————————————————————————————————————————————–
Nowadays, I think we can’t talk about a Goan community. What still remains and which connects several people is Mozambique where many Goans of my generation were born. Their parents left Goa after the Indian Independence.
Most of the Goans I meet today in Lisbon are involved in commercial activity. Beyond restaurants serving Goan food, they have shops of clothes, food and furniture. The young ones are completely assimilated in the Portuguese society; Goa is just a far place where they one day would like to visit and where they know that they have some relatives.

Nowadays there is no close connection between Portugal and Goa. There is nothing to attract the Portuguese to Goa except the beaches. Even the inexpensive life is smashed by the expensive plain tickets.-

In Pondy we can really feel the French presence in the everyday life.

In Goa, the Portuguese didn’t left any cultural or social institution, like school, libraries, cultural centers, anything that keeps the link; or if they did, they have such a discrete presence that I didn’t notice in the short time I spent there. I didn’t see any businesses like shops, restaurant or cafés with the Portuguese style, like we saw the French doing in Pondicherry.

The language is only spoken by a few old people, and there is no particular effort to teach or pass it to the new generations in Goa. Soon all will be lost.
What remains the religion… but it follows its own path.

————————————————————————————————————————————–
The religion is part of the culture, specially during the beginning of the 14th century, when the Catholic Church supported the movement that we call Descobertas which contained the new maritime routes and also new countries. This is however not a politically correct term to use because many of these territories were already inhabited and had a strong culture. The Portuguese just put them on the map, and didn’t “discover” them.
At that time it was normal that on arriving to a country, the Portuguese, (like all the other colonizers) would want to impose what they thought was the true religion to the “barbarian” culture they found. Even after all these centuries, the Catholic Church is part of the identity and the culture of Goa, and must be respected and seen with all the historic context of those times.
Also it is important to remember that almost all religions were spread by imposition of a king, an ethical domination, by politics or war. I think that the implementation of the Catholic religion in Goa is a natural result of the Portuguese presence, as was the language and the gastronomy.
We impose but we also assimilate… it´s the history of the countries. I have traveled across India. Did I find that Goa has a different vibe compared to the rest of India?

Maybe it was a combination of the relaxed Goan lifestyle mixed with the climate and the wonderful beaches, that attracted the Westerners during the 60’s. But I don’t think that this feeling was a result of the Portuguese presence. Maybe the free consumption of alcohol is part of our legacy.
Anyway, my perception of Goa was not so deep as for example Pondicherry or other cities where I stayed for several weeks in this last visit to India.

—– Thanks Catarina for this recount.

Mexico: Sharing a Day of Service with my Son
Zurviving Zanskar
Illegal English Lessons: Volunteering With Refugees
Turkey: Visiting the House of the Mother Mary

9 responses to “Goa Through the Eyes of a Portuguese Woman”