Getting lost in time in Indonesia. 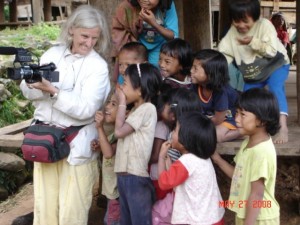 “I’ll show you beautiful, unspoiled Simbuang, “Stanis assures me. He is an anthropologist who hails from Toraja, Indonesia and has helped me interview mothers of young infants, several To Pakianak (traditional midwives) and bidans (contemporary midwives), and To Minah Tato Dena, a spiritual leader of the people who practice Aluk to Dolo, the religion of the ancestors. According to Stanis, Pong Bembe, our destination in Simbuang, can only be reached on foot.

I immigrated to the US in 1965 to study Neuroscience and discovered soon that the joy of travel at least tripled if journeys are associated with interesting projects. In Toraja, I found Kapok trees in which babies who died before they had teeth were buried, so that “their pure souls could ascend directly to heaven.” In the US, mothers of babies who died of Sudden Infant Death Syndrome (SIDS) are planting trees for their infants. This coincidence intrigued me as I continued to study SIDS. I posed the question: Does SIDS exist in Indonesia?

Our journey in Stanis’ Kia begins in Makassar, the capital of Sulawesi. We drive via Para Pare to Nozu, a twelve-hour trip. Some guys gathered at a warung (roadside stand) look under our car and warn that the road ahead will be impassable for us. According to Stanis, men fear driving that mud-filled, steep road full of boulders at night, not because it is difficult, but because rumor has it that their penises may shrink if evil spirits accost them on the way. So we are lucky to find a four-wheel drive vehicle and a driver to bring us to a primitive inn at the beginning of our hike.

The next morning we set out early and follow a trail through rice paddies that blanket the hills. We need to cross a river that now after the monsoons can be negotiated by wading through it. A few women we pass sit behind their long looms and weave the traditional fine cotton cloth to be made into dresses for weddings and funerals. Bright striped yellow-brown, vermillion-ochre and red-white woolen weavings are worn here as ponchos to protect the farmers from the bitter cold at altitude. I’m now almost 70. I can still do this hike. In early afternoon we reach Chief Pallinggi’ stilt house where we will stay for the next four days.

I asked Eddie, our driver, to buy some chickens. He returns with two expensive ones. Most were sacrificed earlier in the week to deities to avert a typhus outbreak. The chief’s wife preparesthem and we eat sitting on the floor with some male neighbors and our party. The wife, however and the women neighbors enjoy their portions in the kitchen by the warm glow of the hearth while a gaggle of young kids surrounds them.

Pine, about 60-years-old, a woman healer has given me a massage and noticed with some consternation that my right hip is “sakit, sakit” (sick). I need Stanis to reassure her that it is a metal one. In her garden she grows herbs that can influence whether barren women become pregnant or whether mothers will carry a boy or a girl. Secret incantations reinforce these herbal powers, but she isn’t willing to divulge them, other than to say that she has learned them from her father. Before I leave she asks: “Can you become my sister?”
We instruct four women Herlena, Bernawati, Magdalena and Yuliana to interview approximately 200 mothers in Pong Bembe, and in further away Kanan. They are to inquire about the babies they have carried and birthed, including those who died early. Here sudden death is attributed to evil spirits whisking babies away; babies must always sleep next to their mothers on the mattress and not close to the window. Neh Rande and Ta’da, two traditional midwives have delivered all babies in Pong Bembe, but in Kanan there are no midwives so mothers deliver with the help of husbands and female neighbors.

Around Pong Bembe, a dozen kids follow us around, hiding their faces when we try to photograph them. Later during the walk they relax, and ultimately they are thrilled when they see themselves in the viewfinder of my camera.

What lifts this entire trip to another, higher level? In the four-wheel drive that brings us back to Nozu, I hold on tight so as not to be thrown from side to side with every attempt of the driver to avoid mud holes and boulders. It is then that I realize that I am living my life fully, on my own terms, for perhaps the first time. I admit to a quiet peace and a profound feeling of satisfaction for the duration of that unfeminine but fitting jeep ride.

About the author: Toke Hoppenbrouwers is an emeritus clinical professor of Pediatrics at the University of Southern California. She has written more scientific articles than her age and a book SIDS. Autumn Sea, her novel, received a Small Press Award. She has recently traveled to Indonesia to study sudden Infant Death Syndrome (SIDS) and infant birth and death rituals. This piece is the last of a dozen nonfiction pieces that have appeared in literary journals.

Where Dreams Are Made in the USA
South Africa: The Place Where I Found Hope
Manzanilla, Trinidad: Island in an Island
Memories Regarding Virginia