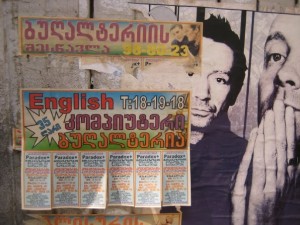 We’re talking secret passageways here. Sitting in an attic room of a Georgian hostel, all stately dining room and foreign guests downstairs. She’s reading in the light of the sliver of open door from the hallway and from the bathroom, thinking that the bookcases in their bedroom should open up into another world, all made of wood from the trees and mountains outside. No European stone and missing pines here.

She had gone in to the bathroom to wash her face. Her friend, from here, tall, tall, tall and blond, tall said in threes like her crazy grandmother would have said when Alzheimer’s had had its way and language was all mish-mash, is sleeping in the other room. Just enough light. It’s sufficient for her to read the words of her own writing, even in a former republic, she is dallying in the moment.

They were walking through the square earlier, all open with the big blocky statues, and then the influx of economy and banks and stores and cafes gave way to a myriad of little streets. They chose one to walk down and the two of them were talking about rivers. Because she was reading this book of poetry given to her, written in Italian by a former colleague, a chemist from Pisa writing on one way trips. “Viaggio di Andata” is the title and it talks of the person who leaves on a grand voyage of self-discovery, without paying any kind of attention to turning around someday.

It’s poetry about being the traveller, pulling out of the quotidian, holding a magnifying glass to yourself on a map of the world and trying to pick out the borders of the country in which your currently sipping your Nescafe. Reading your newspapers in passing, the world ceasing to exist outside of your unique itinerary.

She’s still in the former soviet block and her friend is still oh so tall. They were eating breakfast yesterday, downstairs in the rooming house’s dining room, antiques and big pictures on the wallpaper, carved banquet buffets, stone symbols on the fireplace. And wood, all round wood, balconies and they were looking over at the current president’s residence and she had been collecting notes.

This country needs a little PR and it would be the new Rome she thinks. It’d be better than Rome because it’s more personable and after all, there are less tourists. You’ve got something here, she feels like waking her friend up to tell her that.

And it’s her friend’s home town and it’s chic and they know each other from her own home town which is all tradition, blue collar and university folk, up north in the States: miles away. She knows that hers is actually the sheltered world, despite all the international decrees. And this friend who had come over years ago to study a little of the language and society and bring it back over here and build some business and build some government and build some future. Her friend is real.

And now she’s here visiting. On her own trip overseas. On a leg with a little deviation from the romance cultures and soft curvy letters of the Arab nations she’d spent so many months crossing.

They have a river here, a river her friend and her had had to cross to get to the high castles and churches on the other side. An old river, forgotten by the Westerners. And she finds herself stuck on this concept of the river. The poet says that every question you ask yourself you either answer and move further across the river or answer with a lack of answer and you’ve still moved some. Acknowledgement of the unknown gains you some ground.

Her friend had reminded her that these thoughts were a luxury for people from a country of pockets that contain money for bread and for water and for slow mornings, spent with a newspaper and coffee. And she thinks that she’s on this one way voyage and that’s all fortune.

She’s lucky. It’s August, and the summer is winding down. But she’s honest and she knows it’s just a matter of floating when the seas are calm and swimming in the waves. If we’re not trying to get somewhere, just practicing our stroke, then what harm can we do if we get a little self-indulgent every now and then.

When they were over the water she leaned in and hugged her friend, thanking her for the trip. And they’re still here in Tbilisi, waiting to visit the sea, taking a train tomorrow. But it doesn’t matter. It’s what she wanted. It’s free form, every effort, a lesson for later on.

About the Author: Meredith is an applied linguist currently living in London. She writes modern short fiction in her spare time and spends every spare penny on plane tickets for travel. She wrote this story the night before the August 2008 conflict occurred which resulted in a Russian invasion of the Republic of Georgia.

Welcome to South Africa
The Green Heart in Italy
Cherishing Time with Students From the Ivory Coast
Delhi: A peep into the history of India