George is a Chalkboard Champion! 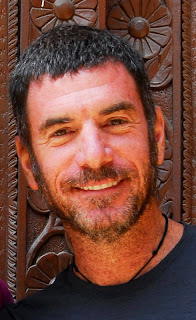 Many hardworking educators give unselfishly to causes near and dear to their hearts, and chalkboard champion George Kenneth Rajna is a fine example of this. George is an elementary school teacher, bilingual speech and language pathologist, Peace Corps volunteer, musician, and travel writer who has traveled to over one hundred countries across six continents around the world. He has worked tireless throughout his professional career to promote multi-cultural awareness.

George was born in Santa Monica, California. He graduated from the American University in Washington, DC, with an MBA in International Marketing. He has also attended California State University, Northridge, where he earned his master’s degree in science with an emphasis in communicative disorders.

From 1995 to 1999, George was employed as an elementary schoolteacher in both the Inglewood and Los Angeles Unified School Districts. George has also donated his teaching talents as a Peace Corps Volunteer in rural Paraguay, where he supported a government educational reform program used by teachers to engage students with didactic materials, hands-on activities, and multi-modal instruction. During his Peace Corps experience, George promoted programs improving dental hygiene in the local community, and he also facilitated workshops for teachers to assist them in creating and utilizing instructional materials for their classrooms.

After his return from Paraguay, George accepted a position as a speech and language pathologist in the Lennox School District in Lennox, California. He was employed there for six years, working with students who suffered from varying degrees of autism and children who exhibited articulation, language, and fluency delays. During his tenure in Lennox, George also mentored new clinicians on how to effectively treat children with speech and language disorders.

George met his future wife, science teacher Lisa Niver, online in 2007, and the following year the couple went on sabbatical together, travelling all over Southeast Asia. Their 2013 book Traveling in Sin describes their unique experiences on this trip, and how their sabbatical fostered the growth of their relationship. Together, George and Lisa founded an award-winning web site, We Said Go Travel, a global community of over one hundred writers who have publicly shared meaningful stories related to travel and world culture. George has also published travel articles in the Huffington Post, Jewish Journal, theHimalayan Times, Technorati, and The Clymb. In addition, George and Lisa are sought-after public speakers.

Here is a link to George and Lisa Rajna’s web site: We Said Go Travel.

Here is a link to George and Lisa Rajna’s book: Traveling in Sin. 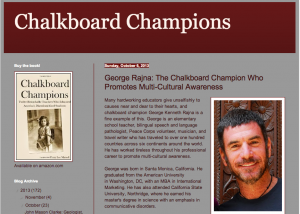 Wanderlust and Volunteerism
Los Angeles: Uber it! Join Gogobot, LACOT, Dave's Travel Corner for a travel talk and Raffle Oct 16
My Place Somewhere in the USA
Welcome to the Double J in Texas

Terry Lee Marzell has been an educator in Corona, California, for the past 32 years. She is also the author of the book Chalkboard Champions: Twelve Remarkable Teachers Who Educated America's Disenfranchised Students and a blog celebrating amazing teachers. She and her husband, Hal, enjoy traveling during the summers.