France: Below the Surface of the Seine 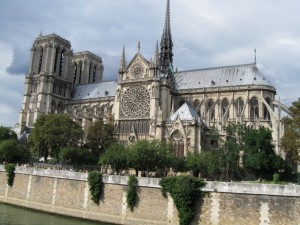 The river Seine hides behind the next cobbled corner, only a minute’s stroll from the Right Bank atelier apartment where I am staying, off Rue de l’Hotel de Ville in Marais, Paris. The murky Seine is ever present, snaking its way rapidly around the Île Saint Louis and Île de la Cité, carrying centuries of memories, as once it carried the bodies of slain Celts, unwelcome Algerians and Protestant refugees. A tragic irony becomes apparent in the name seine; an Old French word that means ‘fishing net’, when one learns of how often it has hauled in slaughtered bodies over the centuries.

I am staying with my boyfriend, a fellow-Australian writer, in the Cité International des Arts, in Marais, a complex of 300 studios, occupied by artists from 37 different countries. As with all of France, the Cité des Arts has a layered history, growing from the inspiration of one man – Felix Brunau – Inspector-General of Public Buildings and National Palaces, who convinced the French Government in 1947 that there was an urgent need to assist foreign artists in the post-war period of reconstruction.

As I cross the Pont Marie onto Île Saint-Louis in dusk – one of many bridges that links the Right Bank to the Left Bank – I look across to Notre Dame Cathedral to my right and observe the illuminated river ferries carrying tourists dining on board, sipping wine, oblivious to the dark past that probably produced that vintage. Their blurry gaze would barely register the Left Bank where vineyards once flourished in the thirteenth century on what is now the rue Galande, extending to rue Saint-André-des-Arts. Ahead of them, the Pont St Louis and Pont de Archèveché lead onto the Île de la Cite where the ferry will in a few minutes pass the Notre Dame Cathedral, where the 1499 floods washed away a bridge. The volume of river traffic, including wine merchants, and the dense population meant that all bridges had to be secured by chains. If this were the early eighteenth century, I would be looking down from the bridge onto flettes – the small boats that transported wine and grain into the city, their captains fearful of hustlers and thieves.

Who could believe that this now illuminated, romantic area of Paris – where lovers attach lockets to the Pont Louis-Philippe with inscribed messages of betrothal, and brides with grooms pose for photographers – was once the haven of dysentry and typhus imported from small hamlets along the Seine or resulting from its use as a sewer, and where love was replaced by commercial sex offered in taverns, often leading to syphilis.

Betrothal was not always a matter of choice in Paris. Ahead lies Notre Dame square, where in the sixteenth century, Catherine de Médicis had strategically arranged a politically advantageous French marriage between Marguerite de Valois, a Catholic, and Henri de Nevarre, a Protestant aristocrat. This was the trigger for the Bartholemew Day Massacre.

As I look down into the grey-green waters that rush with urgency into the future, I imagine the Seine running red with Protestant blood as it did on 24th August, 1572. Within days of the marriage, the Seine was to be the watery grave for thousands of wedding guests, victims of the frenzy that overtook the Cite. The streets became a battlefield where now stands the Louvre and the Latin Quarter, and the Seine was swollen with bodies that floated back onto the banks. The massacre soon spread into towns, with Lyon having 2,000 Protestants killed in one day. Now the river reflects only the grey, darkening night and the city lights.

Light rain begins to fall as I return towards the Cité des Arts apartment. A chilly breeze brushes raindrops on my face, so I pull up my jacket hood and ruffle my woollen scarf higher around my neck. Piano accordion music greets me as I approach a busking troop of performers, unperturbed by rain in the dark of night. I stop to photograph them, surprised by their lyrical refrain that summons up the spirit of Paris. Such is the contradictory nature of this contemporary city. Dark and light constantly mingle.

As I open the heavy iron gates to the Cité des Arts courtyard, the lyrical mood of the performers lingers, and I feel happy about the present, grateful for the opportunity to distill into words the impressions I have gained from my stay, in awe of the tumultuous history with its bloody events, all washed away in the river Seine, leaving behind this present grandeur. Grateful also to Felix Brunau, and his inspired entrepreneurial spirit that has allowed me and my partner to have the opportunity to write in Paris, aware that the past is ever present in this moment.

About the Author: Kathie Ashton is an Australian writer and visual artist. Currently, she is staying in Paris in the Cité International des Arts with her playwright partner, whose plays are produced in Europe. She is currently working on writing and illustrating a children’s book to coincide with a Paris production of a play for children.