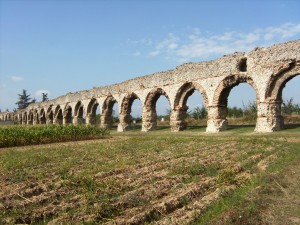 Travelling is my passion. It’s the thrill of experiencing the blend of ancient and modern in places like Athens or Rome, or knowing that anything can happen such as having to get off the track outside a village in Thailand to make way for a water buffalo carrying two small children on her broad back.
Over the past few decades I have been extremely fortunate to have seen some amazing structures and I will always be humbled and moved by the accomplishments of people of the past. They remind us that brilliant minds have always been, and were able to design and build without the use of electricity and the need for computers. There are two places in particular that had a profound effect on me that I would like to share.
On a camping trip to France in 1976, I visited the Gier Aqueduct, situated to the north of the city of Lyon. This incredible aqueduct stretches for about 53 miles and was built to bring water from the Gier River to Lyon. I believe it is the longest known of the Roman aqueducts.
The section I saw that early summer day took a lone path through waxy colored fields. It’s hard to really describe how I felt standing in that dry yellow field in the midday heat looking at those ancient arches stretching silently into the distance. The stone was cool to the touch, pitted and uneven from centuries of exposure to the elements, and there was a faint woody smell in the shadows from the moss and ferns growing in small damp patches. The Romans were certainly a people with purpose and vision, and I wonder if the engineers who designed it had the notion that centuries later someone would stand in this spot and marvel at their brilliance. Although now in ruins, the Gier aqueduct stands strong and able, and I somehow felt comforted to be in its presence.
The second place that truly had an impact on me was in Greece. While on a trip to in Athens, I met a couple of New Zealanders, and a British man travelling with his mother. This lady had been reading about the excavations of the tombs at Mycenae where Heinrich Schliemann had found the gold funeral Mask of Agamemnon and other treasures. We all agreed that it seemed like good idea to pool our money, rent a car and drive to Mycenae .
The site of the citadel at Mycenae sits on top of a hill in the Peloponnese Mountain region and is thought to have been inhabited from about 2000 BC. It overlooks olive groves and countless rows of orange trees, and in the distance to the south is the Gulf of Argos.
To enter the citadel, you walk through the magnificent Lions Gate. These two lionesses, one positioned each side of a column on top of what looks like an altar may have been considered guardians of the city. When I first saw the Lions Gate, I wondered if the people who designed it had ever seen a real lion, or did they work from sketches. The heads of the lionesses are long gone, but centuries later their bodies still emanate a sense of power. There are many ideas about what the gate represents, but to me it makes sense that the people of Mycenae considered them protectors.
It was a crisp January day when I sat and listened to the wind blowing through the ancient stone walls, carrying with it the tinkling of bells that hung around the necks of the goats in the village below. There was a hint of salt in the air and I fancied I could hear the marching of soldiers returning home from the Trojan war as they made their way up the hill. Surely the lionesses must have been a most welcome sight. Were these men reassured that their families had been protected by these mighty guardians in their absence? Had the people of Mycenae believed the gate would keep them safe? To me the Lion’s Gate is not only a symbol of strength and protection, but also of trust.
I will always be in total awe of the Romans for their ingenuity and feats of engineering, and of the Greeks for their philosophy and dedication to architectural beauty. Wonder and amazement truly describes my feelings when I remember my visits to the Gier Aqueduct and Mycenae. They stand with a quiet dignity, bringing a continuity from the past into the present and will continue to be tangible reminders of strength and endurance on into the future.

About the Author: My name is Louise Zontek. I was born in Sydney, Australia and have lived in the United States since 1980. I love to travel and have a particular passion for ancient civilizations and history.