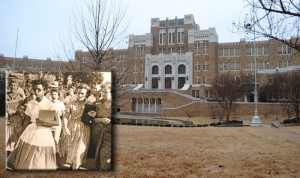 There’s nothing as awesome as courage

When we think of an awe-inspiring travel site, the mind immediately begins to visualize images of the Grand Canyon; somewhere lofty from which mere mortals can, for a few moments, look on the vista ahead as if we had just finished creating it.

That’s perfectly legitimate but for me, what triggered a sense of awe, gratitude and pure admiration was an elegant but unspectacular brown brick building, a high school, as a matter of fact.

Little Rock Central High School looks like any ordinary American secondary school today; students of every shape, size and skin color are streaming out the doors, trading friendly jibes, laughing and jostling each other. Just the end of a regular school day.

It was a very different picture on Sept. 4, 1957 when nine black students arrived to register for classes. They met an angry mob of protestors, white segregationists determined to keep Central a white-only school.

The U.S. Supreme Court had declared that segregation of schools by colour was unconstitutional and illegal. Arkansas Governor Orval Faubus opposed the ruling and directed Central High to do so as well.

The governor ordered the Arkansas National Guard to join the hundreds of segregationist citizens in blockading the school.

The action of The Little Rock Nine, as they became known, was arguably the first major event in American history watched on television, heard on radio and trumpeted by nearly every newspaper in the U.S. It was this site in an ordinary neighborhood that defined the battle for freedom and equality that spread like an uncontrolled fire across the US in the 1960s.

Photos of the event are heart-wrenching, especially one depicting a young student with a crowd of white citizens screaming at her. When she spotted what she thought was a friendly face, the woman spat at her. I feel tears forming in my eyes each time I see those photos.

The standoff lasted for three weeks. Finally, by invitation from the mayor, President Dwight Eisenhower on Sept. 24, sent the 101st Airborne Division of the U.S. Army to protect the nine students and enforce integration. He also federalized the Arkansas National Guard, taking the 10,000 members out of the governor’s hands.

The nine students enrolled and attended classes, usually enduring physical and verbal abuse for the remainder of the year. Even a year later, the governor closed four high schools, threatening to create private schools.

Today, the school houses a museum of civil rights. Across the street, the community operates an impressive information centre displaying photos and information. Although neither this centre nor Little Rock are mainstream tourist destinations, visit if you get the chance.

I can safely say my visit was one of the most profound experiences of my travel life. I knew standing there that I, like the rest of humanity, owed those courageous youngsters a gigantic debt of gratitude. It doesn’t matter that I’m not black. It matters that someone seemingly small and powerless, in the face of hatred and danger, stood up for human rights.

About the Author: Regis Yaworski, retired from teaching at a Canadian college, publishes a travel website as The Road Prof. He specializes on road trips but that doesn’t keep him out of airliners or cruise ships.