Flying Away: Will you Love me Anyway? 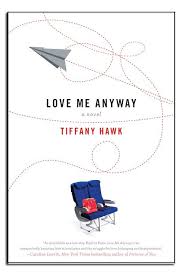 In Tiffany Hawk’s novel, Love Me Anyway: A Novel

, Emily and KC seek new lives flying towards their unrealized dreams. Approaching their new job as United Airlines flight attendants from different runways, Emily explains, “For KC, picking up and heading to Chicago meant she was a grown-up. For me it was proof I was young after all.”

Emily’s high school sweetheart turns out to be a dangerous husband swinging calphalon pots, demanding perfection in the kitchen and no commentary allowed as he once kicked “his wife out of the car and left her on the side of the road late at night just for reminding him to turn on his headlights.” Carl’s escalating behavior frees Emily to leave home, however, her father and step-mother have tried to restrain her with their philosophy, “expecting too much from life would only lead to disappointment…Doing what you love was only for people with money or connections or both.” Despite these obstacles, she learns the ropes with KC and allows her deep desires for travel, love and being bolder to guide her.

KC’s seatbelt of beliefs about being abandoned by her father and her mother’s illness restrain her. She wears her secrets like a life vest but they are not helping her stay afloat. She does buoy up Emily, who says, “KC makes me want to try anything. She makes me believe I can have a rewarding career, a full passport, and true love. If I’m going to fail, I want to fail trying. “

During their voyages, layovers and crash house moments, they deal with divorce, death, affairs, domestic violence and missing parents. The detailed in-flight experiences include an unaccompanied minor (UM) on bereavement fare, layovers in exotic cities, a plane colliding with a fuel truck, and mile-high trysts interrupted in the bathroom. The insider knowledge creates an intimate feeling and at moments I found myself thinking this was Emily and KC’s memoir rather than a novel.

While Emily’s family tells her not to “abandon everything to be wild and free,” KC’s mom encourages her to push for more. “I want you to have a better life…You could see the real New York and Paris and Rome. Don’t let a lifetime go by without leaving the walls of the desert.”

The new lifestyle is exhausting, as Emily says, “Five months into this job and I’ve yet to log eight consecutive hours of sleep.” But, it seems the downside is worth it and Emily wants to “prove I can be fearless and exciting,” and moves to London. “With every mile I fly, I am moving forward, toward something. Maybe if I move fast enough, I can keep one foot in New York and LA and Shanghai and Paris at the same time…This is the promise of the flight attendant gig. It will quickly fill the hole inside of her with foreign sounds and smells and sights.”

During the story, both Emily and KC attempt to fill in the cracks of their souls differently but often with new locations, new men and more alcohol. Emily wonders about her London lover, “If he only goes rock climbing so people think he’s athletic and daring, that’s hardly living. Is it any better than staying in a small town and doing the job your parents expect?” Both women struggle with finding themselves while flinging themselves around the globe.  Even if you fly for a living, your baggage follows and finds you. As Emily says, “we’ve been to dozens of countries and have trendy haircuts and a few stylish outfits, but still neither of us knows who we are or where we’re going. “

Hawk’s sense of humor and great details make this story set in India at the Taj Mahal or in Emily’s hometown of Bakersfield for burgers at the Boll Weevil feel real. For example with the high school friend turned waitress, she remarks: “she stayed home to raise cattle, and apparently, serve it, too.”  I felt I really got to know these characters and was invested in what would happen next in their lives.

The two friends evolve from seeking and searching to literally finding a place to land. Both may have been running away from their old lives but they soar toward a new sense of self. Their discoveries on different continents allow them to literally see new sights but they must resolve their internal messages. Do I deserve a good life? Is it okay to want more? Is this all there is?

Many fantasize that becoming a flight attendant is an automatic ticket to all your aspirations coming true. You definitely can fly away but in the end we all need a place or a person as an anchor to call our own.  Enjoy traveling with KC and Emily. Perhaps they will inspire you to break free, take a risk or embrace what you’ve already built.

As KC realizes, “she doesn’t have to be prepared to handle her entire future. If she can just survive one test at a time, plant one foot at a time, she can make it the whole way.”

TELL ME MORE ABOUT: Vanuatu, #VanuatuMoments and #AnswerTheCall
Spirit of Adventure
Who is #12 on the TOP 1000 Travel Blogger LIST?
Feel the FEAR, Travel ANYWAY!