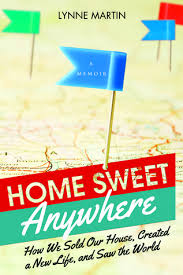 Home Sweet Anywhere tells the story of Lynne and Tim Martin who decided that their American dream did not involve a white picket fence and a retirement of babysitting grandchildren, watching television and staying in one place. They sold their home and started a Home Free Lifestyle of travel in their seventies so they could “experience living in these places, not only visiting for a week or two…We would “unretire” and find a way to move freely around the world, soaking up the sights and places that had been gathering dust on our never-ending bucket lists.”

Lynne and Tim re-found each other after many years apart and adopted a lifestyle of “Postpone nothing… because life is too short and too sweet not to savor it the way you want.” Lynne shares the challenges of becoming home free and how the packing, selling and organizing in order to leave was balanced against the “miracle that we were united in this notion of fulfilling our dreams of being home free, experiencing the world…It was like a dream in which we would recapture all the years we’d missed having together.”

Their journey has included “a high-rise in Buenos Aires; a hacienda in San Miguel de Allende, Mexico; a tiny apartment with a big view of The Blue Mosque in Istanbul; a darling flat in Paris; a villa apartment overlooking Florence; a medieval three-story walk-up in La Charite-sur-Loire, France; a balconied one-bedroom by the River Thames near London, an apartment outside Dublin; two rooms in a colorfully tiled Riad in Marrakech, Morocco; and a beach house near Lisbon, Portugal.”

But as Lynne says, “While indescribably rewarding, this path is not for sissies.” Giving up everything has its challenges and can be exhausting but making your dreams come true and spending your days with the one you love is worth the struggle. They quickly realize that “our best teachers are other travelers,” who can share knowledge about visas, transportation or best places to stay.

While everywhere they visit is not a perfect match, they find the “true treasure [of Turkey] is the people. They are sweet, clever, accommodating, and hilarious…Language is no problem when everyone tries hard to communicate.” Lynne and Tim collect friends in every city and manage to meet up with many of their new nomadic tribe in multiple countries. Tim realizes in France that “the French work to live, not the other way around, and the work they do seems to be appreciated.”

Being off their own continent, they learn about themselves and realize that other “people would have some interest in our home-free life, and even benefit from the story of mature people striking out to do something daring and different from what’s expected of them.” Lynne’s parents were also global nomads setting out on the road for seven years in the 1970’s. Armed with memories of letters from that journey, they know that they can realize their goal.

During a return to the United States, the Martins realize that “we had fundamentally changed since our decision to live home free. Our worldview had become larger and our place in it more fluid…living home free had unfettered us in more important ways than leaving pots and pans behind.”

Travel is the best education and the Martins became “much more intrepid and felt completely comfortable about being in new situations, living in countries whose languages were unknown to us, finding friends to amuse and inform us. We had more confidence in our ability to be in the world, and it certainly took a lot more drama to make us upset nowadays.” Many people could use this perspective of living in another place and discovering what they truly need and value.

Lynne was invited to write for the Wall Street Journal, which led to her memoir, Home Sweet Anywhere, being published on April 15, 2014 by SourceBooks. Her choices are “challenging our notions of what ‘old’ means.” What assumptions about your life are you ready to defy? Read her tale of travel and get inspired to change your life! Do not be “resigned to a life of boredom and routine. Living home free is more than an action; it’s a mind-set, an attitude. It allows one the latitude to embrace a new idea, change a long-observed pattern, or make a new friend.”

Where will you go? What will you do? Share it in the comments below.

About this review: Lisa Niver Rajna, M.A. Education, is a passionate writer, educator, social media ninja, speaker and global citizen, who has traveled to over one hundred countries and six continents. She is the creative spark behind We Said Go Travel and just returned from filming in Puerto Rico with Richard Bangs and White Nile Media.

Click here to Pre-order. Pre-order before April 13, 2014 and receive a signed bookplate from Lynne Martin.

Oahu: Oct 3rd Travel Talk Story
Kangaroos on a plane!?!?
Thailand: Finding Friendship and Tea Above the Clouds
Flying Away: Will you Love me Anyway?

One response to “UnRetire: Finding Your Way to Home Sweet Anywhere!”