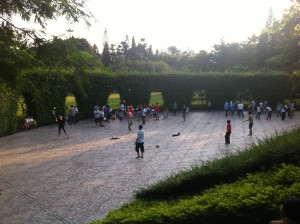 If you’re a foreigner in Shenzhen, China, you’re probably not as unique as you think you are. I mean, sure, Westerners in certain parts of China stick out like a sore thumb, and are often victims of being stared at by the curious locals, but downtown Shenzhen is a booming, busy and modern metropolis, and at times it even resembles New York in the diversity of people it houses. There are parts of the city that are completely swamped with foreigners of all kinds – mostly Europeans and Americans – and in those areas English language is as common as Mandarin or Cantonese.

It’s up to you, the average traveler, to pick and choose your spots, and therefore get as much of an experience out of your trip as you can. You can choose the typical sights that attract many a tourist in this city, such as Window of the World, or you can be a bit more adventurous, and visit a small, safe and educational underground event. If you should aim towards the latter, your choices will be few, but there is one place in particular that’s unknown to many who visit here, and it has a uniqueness all its own: the English Corner.

Shenzhen is home to several English Corners, and the best way to a particularly notable Corner is to take the Luobao train (on the subway map it’s listed as the “green” line) and get off at the Grand Theater stop in downtown. Follow the cement trail in the nearby park as it curves to the left, and soon you’ll find yourself in an area with numerous people, both Chinese and foreign, who are there for one purpose and one purpose only: to meet new friends using English as their common ground.

The first thing you will hear are the voices of Ivy and Eric, the English Corner founders and organizers. They will typically be giving a large English lesson to a group of people consisting of middle school students, college students and even middle aged men and women. Eric is often wearing a microphone headset, and each syllable he delivers echoes across the area through the large stereo speaker he brings there every week. Ivy’s voice is equally dominating, except she is usually microphone free, choosing instead to let her vocal chords carry each sentence or song rhyme to her listeners on their own. The effect is still one and the same: Ivy and Eric (who are both Chinese) love the English language, and they’ve made it their goal to share it with others during these social activities out of pure joy.

The diversity of people who attend the English Corner, which is held every Saturday from 5 to 7pm, is as great and as varied as a meal during a typical Chinese dinner. You may find yourself discussing the uniqueness of American food back in the States with a Chinese college student who has never been outside of his home country, or try to explain to a local woman why she is able to understand your English as you converse with her, but is unable to understand a single word when watching a Hollywood movie, where all the actors talk very fast. Or you may run into a middle-aged Russian writer who, having lived in the States for many years, is now wandering the world in search of new inspiration for his craft, and who has chosen the far East as his personal muse. Either way, no matter who you end up talking to, you’re bound to learn something new about someone’s culture, their perspective on their travel experience or possibly even exchange some life lessons with your new friends, in this unlikeliest of places.

The glorious Shenzhen backdrop of high rises and (often) clear skies illuminates this area until sundown, when in a customary fashion, everyone goes out to dinner together. Led by Ivy and Eric, who started the English corner movement a few years ago, and who possess just the kind of energy and enthusiasm needed for this endeavor, you may end up at a traditional Chinese restaurant (typically with a fantastic menu), or a mix of western and local food combined, depending on the week. The dinner you have that night may be good, it may be even be great, but the company you eat it with will be enough to humble even the most boastful of Westerners. Besides, food comes and goes, but the new, exciting people you can meet while travelling to Shenzhen will leave you with valuable memories for the rest of your life, and there is no better place for it than the English Corner.

About the Author: Armand Diab is a 35 year old former Corporate Video production freelancer who graduated from Columbia College Chicago in 2002 with a Bachelor’s Degree in Film & Video Production. He is currently teaching English in Shenzhen, China. He will be there until the end of June 2014.