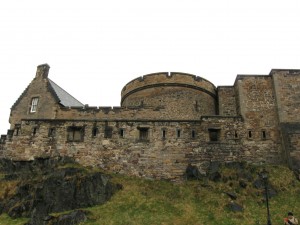 “Gratitude looks to the Past and love to the Present; fear, avarice, lust, and ambition look ahead.”
― C.S. Lewis

While touring Great Britain, my group and I visited Edinburgh Castle, an iconic fortress that stood on top a giant rock dominating the Scottish skyline. I was part of a group with members from the United States, Canada, Australia and New Zealand. While I was walking the streets and dining in Edinburgh, I couldn’t help but notice this symbol of gratitude; for whenever I looked up, the castle was there as it had been there for centuries protecting the Scottish people, including some of my Scottish ancestors.

The castle, built on a volcano left behind by the ice age, was erected and modified over many centuries and had been involved in many historical conflicts such the War of Scottish independence led by Robert the Bruce in the fourteenth century and the Jacobite rising of the mid-sixteenth century.

In order to reach the castle, visitors must walk up the cobblestone inclined walkways, much like the soldiers did in earlier times. Our kilted guide, a fountain of knowledge on Scottish history, pointed out the buildings along the way. Listening to his thick brogue transported me and my group back to earlier times and reminded us that we were in Scotland. Like the other members of my group, I was in awe listening to the guide pronounce “Bruce” with a long “u” or “oo” sound like the dialect of my ancestors.

The guide pointed out the prominent Half-Moon Battery built in the sixteenth century which guarded the fortress. He also mentioned that the military buildings on the site had revised their functions as weaponry changed throughout the years. The fortress housed prisoners during the Seven Years war, the American Revolution and the Napoleonic Wars. The grounds also had living quarters to house the reigning Scottish king and a meeting place of the Scottish parliament.

The Scottish National War Museum commemorated the Scottish soldiers, and those serving with the regiments, who died in the twentieth and the twenty-first century wars. There were rolls of honor of the fallen from each war. I was fortunate enough to find some family names of ancestors (Dick and Greehan) while perusing the museum. There were fascinating exhibits of Scottish military history over the past four hundred years including a wide range of military artifacts, such as uniforms, medals and weapons. The exhibits also illustrated the history and causes behind the many wars.

In a small room, we saw the crown jewels which were comprised the crown, scepter and sword of Scotland. Because of conflicts between the English and the Scots, the crown jewels went into hiding in the days of Oliver Cromwell, Lord Protector of England and were restored for King Charles II’s coronation. After the Parliament of Scotland was dissolved in 1707, the jewels were locked away and forgotten about in Edinburgh Castle until Scottish novelist Sir Walter Scott found them in the far reaches of the castle a century later.

After that, we admired another important Scottish artifact called the Stone of Destiny; also know as the Stone of Scone. The stone was used for coronations of Scottish kings until the 13th century when the English invaded, captured it and used it as their own coronation stone. In the 1990’s the British Government decided that the Stone should be returned to Scotland where it had been displayed in Edinburgh Castle ever since. This Scottish descendent is grateful to the British Government for their wise decision.

Presently, the castle is no longer actively used by the military. The military presence is ceremonial with performances by the Edinburgh Military Tattoo taking place every August. The spectacle consists of a parade and pipes and drums performed by Scottish regiments with military bands from all over the world participating in this event.

This landmark is a lasting symbol of gratitude. I hope to return someday when I can see a performance of the Edinburgh Military Tattoo and get another guided tour from a Scotsman with a thick brogue.

About the Author: Eileen Sateriale is a government administrator who writes in her spare time. She lives in Methuen, MA with her husband and has had the opportunity to travel after raising their two daughters. She can be found on Facebook.

India: Eternal Love
South Africa: Finding My Field
Morocco: Why does Abdul Live in the Desert?
Malaysia: My Place in Life