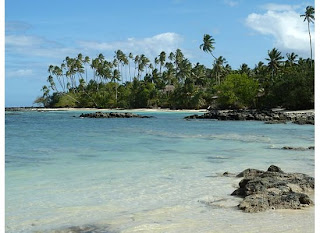 Enjoy this article and video about Samoa and my personal Drama at Virgin Cove–right where they filmed SURVIVOR SAMOA!

Drama at Virgin Cove:
Face-Planted on the Ground
At 1:30am as I lay on the cement step outside the bathroom. I thought, “Hmm, why am I on the ground? How did this happen?” Leaving Los Angeles for a summer of sun in Samoa and the South Pacific, I had no idea about the Survivor Stories that would unfold so quickly.

I had eaten the chicken at dinner, apparently a mistake that night.

During the dark hours before dawn I fainted at the edge of the bathroom steps and there I regained consciousness, scraped and bruised on both arms and chin. I guess when I needed to run to the bathroom again and again I should have woken George, especially after falling, but I was so stunned that I ended up face-planted on the ground.  Once back in our room I lay on the mat, moaning. George woke up and asked what was wrong. After hearing my tale of woe he offered to help. Because of his concern, and despite the many eariler explosions, I was finally able to rest.

This video shows some of the gorgeous beauty of Virgin Cove, our nighttime arrival and the many steps to the bathroom. All aspects of travel are not beautiful but some of them do make us appreciate better the postcard days!

Article first published as Drama at Virgin Cove on Technorati.

I Remember When: I went Scuba Diving!
BALI: Planes landing on the BEACH?
How to Get Photo Ready for the Holiday Season
Sláinte mhaith: To good health and an unforgettable St. Patrick's!