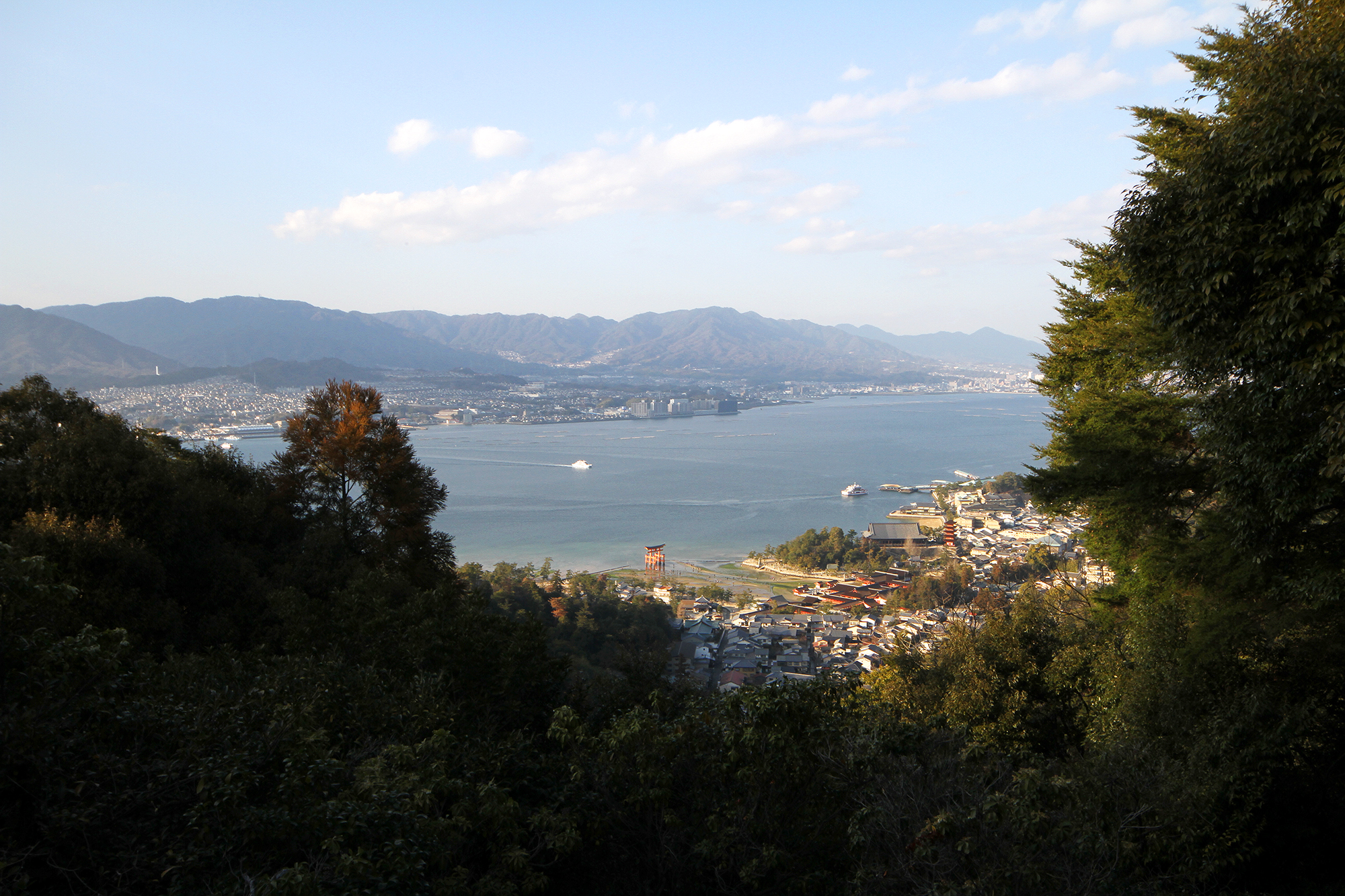 According to “Nihon Kokujisekikou” (“Observations About the Remains of Japan’s Civil Affairs”), Confucian scholar Shunsai Hayashi’s painfully titled book chronicling his 17th century travels through Japan, Itsukushima ranks among the country’s three most scenic spots. Our own travels did not include the other two locations – Matsushima and Amanohashidate – but my husband and I will give Hayashi the benefit of the doubt based on his assessment of Itsukushima, commonly known as Miyajima, or “Shrine Island.”

In addition to Miyajima’s natural beauty of blue sea, serene forest paths and the towering Mount Misen, there are countless man-made diversions making this World Heritage spot worth the hour-long tram ride from Hiroshima: the island’s vermillion shrine and its famous “floating” gate; Gojunoto, the five-storied pagoda; an aquarium; a folklore museum; and the prestigious Shingon temple, Daisho-in.

And let’s not forget the Miyajima O-shakushi. At 7.7 meters long and 2.7 meters wide, this wooden rice scoop is said to be the largest in the world. Wow.

Perhaps the most entertaining feature of Miyajima, however, is the island’s population of wild yet tame deer.

As soon as Matt and I stepped off the ferry and onto land, we were greeted by a very fuzzy, very forward, deer. He introduced himself by munching on my map – apparently a common hazard on the island.

“The deer on Miyajima are wild,” our complimentary map warned. “They may eat paper and cloth. Please pay attention and keep an eye on your personal belongings – especially tickets and souvenirs as the deer might eat them.”

At least that’s what it said before the deer ate it.

If mingling in a city-sized petting zoo isn’t your thing, it’s possible to spot wild deer and monkeys on one of three hikes leading to the top of Mount Misen, a mountain proclaimed sacred by Kobo Daishi, founder of the Shingon sect of Buddhism, in 806 A.D.

We began our hike at the Daisho-in Temple, a 12th century temple serving as headquarters for the Omuro Branch of Shingon. According to temple literature, the sect teaches that enlightenment can be obtained through rituals combining physical, spoken and mental disciplines.

While the temple offers an array of halls, gates and even a cave to explore, I spent a full half hour on the steps, walking amongst an army of stone, calf-high statues sporting colorful knit caps. No, this wasn’t the world’s largest collection of garden gnomes. The 500 statues are Rakan, representations of Shaka Nyorai’s (the Historical Buddha) disciples, and each has a unique facial expression. The caps (and sometimes bibs) worn by such statues are often supplied by parents who have lost a child. They take care of the figures as representations of their dead children.

From the temple, Matt and I hiked an hour and a half to Mount Misen’s summit. We were racing the setting of the sun and ours was not a leisurely stroll. In fact, every person we encountered on our way up was working his or her way down.

Near the summit we encountered the Reikado, a hall containing a sacred flame lit by Kobo Daishi in 1200 A.D. The flame, which has burned ever since, was used to light the Flame of Peace in Hiroshima’s Peace Park.

We allowed ourselves a few minutes to take in the 360-degree view of mist-shrouded islands offered by Mount Misen’s peak until a familiar melody began blaring from the distant Shishiiwa gondola station.

It was. And alone, with the sun about to set, it sounded a bit ominous, as if the mountain itself was urging us to leave.

We raced down the Momijidani Course, the shortest and steepest path, through the Misen Primeval Forest, back to town.

By 6 p.m., Miyajima’s shops and restaurants were closed and the waters of the Seto Inland Sea had receded to reveal mudflats and easy access to the 16.6-meter-high O-torii Gate. But we had a ferry, a tram and then a bus to catch before we arrived in Kyoto the next day. I waved good-bye to the deer as Matt ushered me toward the ferry terminal.

That song, try as we did to dislodge it, would remain stuck in our heads until morning.

“…We two have run about the slopes,
and picked the daisies fine ;
But we’ve wandered many a weary foot,
since auld lang syne.”

To Iceland, with Respect
Solitude on Mt. Kilimanjaro in Tanzania
The Grandeur of Nature: Waimanu Valley, Hawaii
Invincible in Namibia