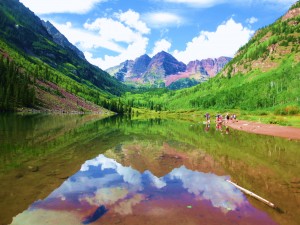 It took me nearly fifty years to finally take the five minute walk to the Maroon Bells, a destination that had been on my bucket list for over two decades. But what made this particular journey to see the twin peaks of Elk Mountain even more special, was the twelve year old boy who was playing in the mud puddles next to me, while happily munching on a dandelion.

“Would you like some?” Mark asked, handing me a fist full of flowers.

“No thanks, but you better eat those quick before the park rangers see you,” I warned him.

Mark has cerebral palsy as a result of being born premature, which mostly affects his left leg and his ability to walk long distances or on difficult trails. He was wearing sheepskin Ugg boots to cushion his feet and suffers every day from some degree of pain, either in his feet or elsewhere in his body. He will tell you when he can’t walk anymore, but he always tries to walk as far as his feet will take him. Today, he had it easy. Our hike around Colorado’s most photographed peaks would be a short one.

Located just twelve miles southwest of Aspen, the Bells are also known as the “Deadly Bells” after eight climbers were killed in 1965. However for those wishing to simply hike around the area, access is shockingly easy. How many times had I admired the stunning images of the Maroon Bells, never imagining that they were literally only a short stroll from the car park?

People from all walks of life were heading alongside us toward the Mecca of Mountains. On the paved trail were people in wheelchairs, a group of bicyclists, a Chinese clan, a lady carrying her rollerblades and beagles busily sniffing at every bush in sight. Off in the distance, a young girl was learning how to fly fish, casting her line over and over into the glassy calm waters of Maroon Lake.

The panoramic view of the high purple peaks reaching upward toward the bluest of skies and reflected in the lakefront, takes your breath away. If ever there was a place that inspires awe and majesty and everything that is good in life, than it is there. You immediately feel the power of creation, gloriously painted across the purple and red mountainous landscape, enveloping every aspen grove and white dandelion field below. You feel humbled and happy to be alive and grateful that such a visually striking place even exists.

The grandeur surrounding us was in stark contrast from the topic of conversation that Mark and I had engaged in previously, while riding on the shuttle bus up to Bells. We had been talking about history and politics, (two of Mark’s most favorite subjects) and discussing the crisis in Syria. Not the typical conversation that you generally have with a twelve year old, but Mark is far from typical and has a mind as bold and as awe-inspiring as the mountains that we were admiring.

Mark was born in Singapore and has undergone daily therapy for most of his young life. He knows he is unique, which is both a blessing and a curse. His ever inquisitive mind, tirelessly seeks meaning and facts about the mysterious world around him and this sadly does set him apart – especially from kids his age. But on our enchanting hike underneath the shadow of the Bells, the history of the world and the politics of war, along with all the daunting facts and data stored in Mark’s brilliant mind fell away, taken over by a place that inspires something that we all seek; happiness and peace of mind. For more than five minutes in the refuge of Maroon Bells, we were both in heaven. Eating flowers and stomping in mud puddles.

About the Author: Prisana Nuechterlein has flown in an ancient Russian helicopter in Laos, hitched hiked on the back of a coconut truck in Mindanao, and nearly boxed with sharks in the Similan Islands. A veteran traveler, her far flung adventures have been published in the Asian Wall Street Journal, The Bangkok Post, The Straits Times, Sawasdee Magazine (Thai International Airlines Magazine),  The Phuket Gazette, Action Asia and numerous other publications. Visit her new travel blog.

7 responses to “Colorado: A Five Minute Walk to Heaven”