I first met Elaine Masters at one of our Meet Plan Go Los Angeles Events. I could not believe she drove through traffic from San Diego to find other intrepid travelers but she did! Now, she is not only a great adventurer but also the host for Meet Plan Go San Diego! I would like to join her in her next journey to San Sebastian Xolapa! 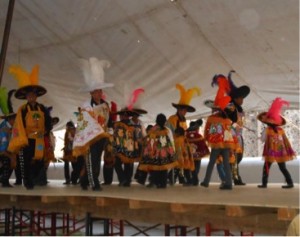 A cannon blast rocked the night – then another and another. There was no crash. The windows didn’t rattle but what was going on? Out of the haze of sleep I remembered – the celebration of San Jose. We’d been cautioned that there would be fireworks in the middle of the night but never imagined they’d be mortar blasts whose concussions could wake the dead.

A short walk from our lodging stood a small church. Inside the statue of San Sebastian patiently watched as the village fervently exploded for the patron saint celebration. It wasn’t even his party! There are three major village holidays each year – for San Sebastian, San Jose and the baby Mary, La Davina Infantita. Just shy of the Spring Equinox, the spirit of Saint Joseph presides over dances, drinking and fireworks.

Directly north of the village and set on a north/south axis, sits the World Heritage Site of Teotihuacan, or Teo as I learned to call it.  The ancient spiritual center is set along on the Avenue of the Dead, which sweeps up to the powerful pyramids of the Sun and Moon. Those ruins drew my small group of adventurers from their homes in the United States for five days of exploring and fine tuning our inner natures. Victoria and Doug Allen created a container of safety, leading us through simple Toltec rituals and the teachings from the ancient Nagual tradition as taught by don Miguel Ruiz.

What we hadn’t anticipated were the fireworks. On the Friday before the Equinox, behind an imposing blue gate we settled into the Dreaming House, a colorful refuge and retreat center. The garden hotel was created on family land by Alberto Romero. I had met Alberto before his dream manifested, at the Villa Archaeological, formerly a Club Med, nine years earlier. One evening at the Villa, Alberto filled a hallway with his obsidian and crystal sculptures, polished Amethyst, Jadite stones and recreations of ceremonial vessels. I was drawn to his work like candy tempts a baby. Much of the areas artistry is carved of Obsidian and Alberto once arranged for me to see where some of it was harvested by locals. At the edge of a dry field, next to a narrow road I crawled through a lava tube and then walked on crackling Obsidian shards from the ancient mine. In the shadows I spied ceremonial alcoves splashed with more recent candle drippings. Since then Alberto’s grown into the jubilant host of his own establishment. On this trip, two nights before the Equinox, he warned our group that the festival of San Jose would be noisy. We hadn’t expected cannon blasts but were soon swept up into the celebrations. 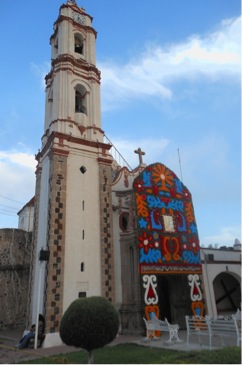 About 3am sputtering fireworks drew near. Drumming and chanting grazed the Dreaming House gate. Soon the Recorrido, an all-night procession passed every home and business in the village. It was the culmination of nine days of daily processions or Novenarios. The village priest held mass and a committee carried the saint figure up and down the streets as San Jose blessed each house.

By the time we were having breakfast the fireworks had subsided and the village was quiet for a few hours. Later that afternoon, after our group trekked through a day of ritual and exploration, Alberto led us to the central plaza where the celebrations had resumed with a colorful flourish.

We turned one corner and were confronted with a long narrow stage under a huge tent. The platform was covered with wildly colored dancers in traditional costumes. It was the re-enactment of a battle from the Crusades and the dancers, many almost toddlers, whirled and pranced for five hours. We were witnessing an ancient ritual, La Danza de los Santiagos, from the Spanish tradition where the Christians battled the Moors.

Around the corner and just outside the church another group vied for our attention. A full Mariachi Band played with sweet abandon and several of our group were drawn up to dance.

As Alberto led us into the main square of San Sebastian we bumped into another party. Here the Archileros wove in and out of the crowd. They were brightly dressed, with matted wigs and furry hands. The masks looked demonic and they were representing another battle, this time between good and evil.

It was loosely explained as a play on the allegory of saints confronting their demons, their illusions and temptations. Whatever the basis, everyone had a laugh and marveled at the hospitality, the costumes and crazy fun in this small, traditional jewel of a city that is flourishing on the edge of the wonders of Teo.

Each time I’ve been there, and this was the sixth journey, there’s been more to discover and enjoy. I always think – the world’s so large, why return? It’s the people, the opportunity to reconnect with my small family of travelers and to discover more treasures like this celebration of San Jose’s ‘birthday.’ I can already feel a small tug of longing to return.