Over the years I’ve caressed many of the Caribbean gems, but never a set like the Cayman Islands. An accident of geography and geology, the three coral islands, cursed with terrible soil, minimal terrestrial relief, no rivers or lakes, but a bask of crocodiles, was not settled by the Caribs, Arawaks, Tainos, or any other autochthons, by the time Christopher Columbus sailed by in 1503. The sharp, black dolomite outcroppings in some places evoked Hades rather than any sort of haven. The first recorded English visitor was Sir Francis Drake in 1586, who reported that the crocs, or caymanas, were edible, as well as the many turtles, but that note didn’t persuade immigration until around 1700, when the first recorded permanent inhabitant of the Cayman Islands, Isaac Bodden, of Welsh descent, was born on Grand Cayman. After him came pirates, refugees from the Spanish Inquisition, shipwrecked sailors, and slaves, but not many as the barren land couldn’t really support plantations or communities of consequence, as nearby Jamaica and Cuba could.

So, it grew up a place with few people. Instead the world came to Cayman, into its coves, sounds, channels, runs and bays. And that diversity of settlers may have saved it from the worn-out, overtaxed fate other islands have suffered. It became a place where everyone was from somewhere else—over 100 different nationalities are represented today— and that ripened into an ethos that invites strangers into the conversation.

The Caymans Islands float at a magical inflection point influenced by three continents, and a radiance of nearby islands. Buccaneers prowled about in search of provisions, safe harbors, and remote spots to bury doubloons. The anchored ships were in a way like bees pollinating flowers in gardens far from where they started, spreading ideas, arts and cultures over this trinity of islands. They brought different music, dance, foods, customs, crafts, beliefs, and new human constructs….the travelers and adventures found shelter and social interaction, and the seeds of multiculturalism were sown.

I take the Bird of Paradise, Cayman Airways, from Miami, a Boeing 737-300, and am delighted to find the carrier allows two free checked bags, the exception these days. It is also the only carrier I’ve ever flown that offers rum punch on the service tray. Turns out the punch is supplied by the Tortuga Rum Cake factory, started by a former pilot, Robert Hamaty, whose son, Basil, is our captain.

As we pull to the gate at Owen Roberts Airport there is a giant green iguana on the tarmac. No ordinary airport, this. No ordinary airline. There have been dozens of airlines in the Caribbean that launched and then fell into the ocean of bankruptcies. But Cayman Airways has been around since 1968, and now serves half a dozen cities in the U.S., as well as Cuba, Jamaica, Panama and Honduras.

On the taxi ride to the Westin Casuarina, the driver, almost to the point of overprize, crows about how safe Cayman is…. “You can walk anywhere, anytime, mon. The beaches have no litter, no vendors, no hassles, no homeless, just pure sugar sand.” I live in Venice Beach, near the Google offices, and despite the home prices and wealth, there is a large indigent population, and a crime rate not to be envied. How do they do it here?

In 1966 legislation passed enabling the banking industry in the Cayman Islands, and that changed everything. The British Overseas Territory went from a sleepy backwater with scarce resources to the fifth-largest banking center in the world with trillions on deposit. Today it has branches of 40 of the world’s 50 largest banks. One five-story building in the capital George Town, The Ugland House, no bigger than a boutique hotel, houses over 18,000 corporations. Business and financial services contribute 30% of the GDP, and employ more than 20% of the labor force. The Cayman Islands has the highest per capital income in the Caribbean, no taxes, and almost no unemployment. And it has evolved into a matchlessly clean, pristine and pleasing destination for travelers.

At the northern end of Seven-Mile Beach (it clocks in at five miles and a few minutes long, but that’s the nature of Cayman….everything is a little bigger than reality), I check into the hotel and take a room where I can see the powdery sweep of sand, the tufted tops of palms soughing in the breeze, and the tourmaline waters that will somewhere to the west brush the shores of Central America.

The tumbling sun bathes the remnants of the day in gold, the norm here I’m told, and radiates romance. Barefoot couples stroll the seam between sand and water, hand-in-hand, while others sip champagne on lounge chairs as the tropic air seduces. By the reckonings of a number of sand experts, this is the most romantic beach in the Caribbean. It’s as close to living brochureware, or a set for a diamond commercial, as I’ve seen in real life. Later I chat with Joanne Brown, CEO & Creative Director of a company called Celebrations, a wedding planning company, and she says business is booming. Many folks come here, she says, and are bewitched by the beaches, the diving, the sunsets, the food and wine, and decide to return to tie the knot.

Shuttles of birdsong nudge me awake the morning next. After a tropical fruit breakfast I drive east to Queen Elizabeth II Botanic Park to see first-hand one of the most remarkable species comeback stories in modern history: the back-from-the-brink saga of the blue iguana.

Just a decade ago, the Grand Cayman blue iguana teetered on the cliff of oblivion, with only 10 to 25 left in the wild, all on this one island. Unaccustomed to predation, it fell victim to an invasion of stray dogs, feral cats and rats. Many ended up as road kill as they sunbathed on increasingly busy streets.

But as of my visit the turquoise-colored reptile has returned to promising numbers, and is no longer listed as a critically endangered species. It dodged the bullet of extinction.

With a switchblade strut that telegraphs sense of purpose, John Marotta, head warden of the Blue Iguana Recovery Program, shows me around the captive breeding facility. He says the blue iguana now has a population of about 750, and is on the path to achieving the goal of restoring 1,000 blue iguanas to Grand Cayman’s shrub lands. “If I’m successful, I’ll work myself out of a job,” John volunteers. “And I’m happy with that.”

The blue iguana is the largest native species on Grand Cayman, up to five feet in length and weighing in at more than 25 pounds (the native crocodiles were bigger, but they are all gone.) The Blue Iguana once ranged over most of the island’s coastal areas and interior dry lands, but without anyone paying attention, they almost vanished. 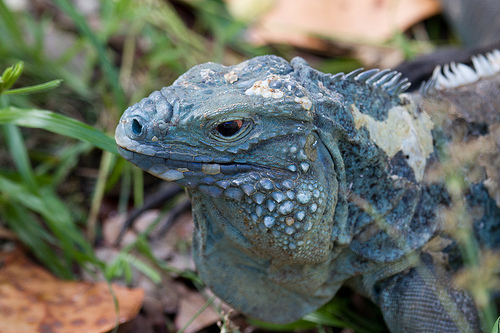 Blue Iguanas are beautiful, with a pimpy fashion sense, but they also have that red-eyed Godzilla look that evokes menace, and they are in fact dangerous. John has 37 stitches from various bites over the seven years he’s worked to help the coldblooded critters, as well as a dislocated thumb. But one friendly fella, Methuselah, 27-years-young, lets John hold and pet him, and even allows me to rub his spikes and scratch the back of his head. John says the charismatic nature of the blue iguanas has helped raise the monies needed to bring them back, but also has helped habitat protection, as the unglamorous scrubland that few value, but which is important from an ecological standpoint, is now being set aside and protected.

John explains the program helps give juvenile iguanas a head start by protecting them for their first two vulnerable years of life, when they are still small enough to be easy snack food. Then, with radio monitors attached, they are released into the wild.

After an hour of barely containing his feral enthusiasm for saving the blue iguanas, John excuses himself, as a school group is approaching, and he wants to direct energies to them. A dozen years ago I did a stint as president of Outward Bound, and one initiative under my watch was “expeditionary learning,” in which students participate in outdoor, hands-on education, rather than from books or lectures. “This is the way to get them involved in life-long conservation,” John echoes, and bolts off to his outdoor classroom, where the future is being written with lightning.