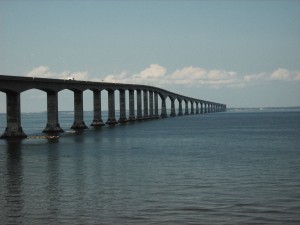 There’s one way over the bridge and no stopping till the other side.

The first time I was only nine. I watched out the window, saw the blue ocean, the shadows of the clouds, the sides of the bridge rushing by. I imagined people landing on the island at night in canoes and rowboats. The grey road slid under me, lighting me up with its vibrations, the music of the tires.
We floated over the endless bridge, long as the horizon, making you think, undeniably, of the machinery humanity brought even to this small island. It was good being nine, to think only of beaches and swimming in the ocean. The ocean was a strange concept, an endless pool of water that was an initiation to the rest of the world, the gateway to the crushing doubt and yet surety of the planet. Here we had arrived, and here we would eventually end.
I

didn’t think about it like this when I was nine. There were too many siblings to annoy and scabs to pick. There is a tourist center on the other side of the bridge, and there we stopped and picked up maps, candy, and camera film. We spent the next days on beaches, in museums, feasting on fresh lobster.

The second time I was twenty. The bridge was the same but now I was driving. My attention was the road, and the calm cars who knew they were on the way to Casual Canada, the place that took itself less seriously. The place that was one of the real sanctuaries left in the world. My passenger took pictures from the window, realizing we were suspended unnaturally above the ocean, and that it would be smart to take pictures while we drove so defiantly.
The sun warmed the car while we kept the windows down for air, and so we could be closer to the moment, more involved somehow. We were friendly with all the other cars. We were all brothers and sisters in that line, friends somehow aligned with a vision—where we wanted to be, we were there. The cars coming at us were the enemy, defeated. Why they were leaving we couldn’t seem to guess, it felt like the inevitability of the ocean. Two tides, one oncoming, one receding, one no more blameworthy than the other.

At the other side of the bridge we bought salt water taffy, and it was the best tasting candy in the world.

The third time was a year later. The roads were familiar, the network of veins and arteries that crossed the land were intuitive, memorable and chartable, already the adventure had taken on some familiarity. The roundabout that led to the bridge was the same, it gave three choices of three provinces, and still we chose the bridge.

The bridge hums as cars cross it, comically large and comically lyrical, humming off-tune to all the travellers, like a tone-deaf mother singing her children to sleep. We stop at the store to buy taffy, and remember everything there from the year before. From this side of the bridge you can see the toll booth, standing like a border crossing, with an outhouse-type structure for the employee working the booth, and a peppermint divider over the road. There’s a sign that posts the charge for leaving the province. They charge people to leave but not to arrive.

The island has one cost, only the cost of desertion.

About the Author: Stephen Koster has been to Prince Edward Island three times. If you had read the story you would know this. In his spare time he skips over stories to read bios. Find him on Facebook.

Indonesia: Within a breath of the Komodos
Extreme Wine Regions
Movies in Malaysia
New York City: All Out Of Proportion