Camping on a Deserted Island, Belize

Shortly after arriving in Belize City I discovered that the town held few charms.  Very few, to be honest.  Despite its quaint clapboard houses and tropically colonial British architecture, this city on the shores of the Caribbean was replete with unemployed young men who had little to do in life except prey on the unwary tourists who wandered its precincts.

Once again I consulted a map, obtained at the local travel office conveniently located near the swing bridge over the Belize River.  It showed the major offshore islands, of course, as well as a few uninhabited cays not so far from the coast.  Uninhabited? I asked my traveling friend.  What’s that all about?

We made discrete inquiries along the riverfront, which was lined with docks and fishing terminals, not to mention a plethora of run-down wooden sailing craft in various states of disrepair.  The smell at low tide was powerful, like that of  a strong cod liver oil potion given by Mom during the 1950s to ward off both illness and good humor.

We showed our map to a number of riverside gentlemen, most of whom shook their  heads at our notion of securing a one-way passage to a random island.  We now had one locale fixed in our minds – Goff’s Cay.  This island looked promising for a number of reasons.  It wasn’t very far away, lying only about 10 miles east of the river’s mouth, but distant enough to be outside the polluting influences of the city.  The map showed another island nearby with a lighthouse, so if we found a ride to Goff’s, we would not be too distant from civilization in the event of an unforeseen mishap.

Now, who has never thought about spending time on a deserted island?  The more we considered the concept, the more plausible and attractive the idea became.  We finally located a friendly, if somewhat peculiar character who agreed to take us to Goff’s Cay.  His price was steep,  perhaps $20 for the one way passage.  We were not prepared to spend so much money for the return trip so we told him, “Don’t bother to pick us up; we’ll hitchhike a ride back to town with a passing fishing boat or yacht.”  He thought this plan crazy, but twenty bucks was twenty bucks. We agreed to meet the next day to begin our journey.

We spent a frantic afternoon purchasing supplies.  What would we need and how long would we stay on the island?  Educated guesswork formed our answers.  We bought canned sardines, lots of rice and beans, snacks, rum, and other supplies to keep our spirits afloat during this self-imposed isolation.

Our boat driver arrived at his dock on time the next morning and we departed without incident, after giving him his fee up front.  He had a mad glint in his eyes that matched his skinny build and toothy smile.  Soon we cleared the river and left the city behind. 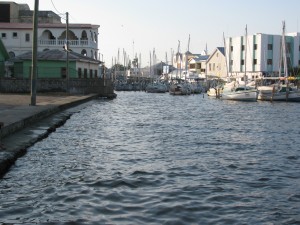 The weather was clear,  beautiful, and sunny, but the seas ran high.  Our redoubtable pilot, understanding that he was being paid by mileage and not by the hour, allowed no leisurely comforts  as we shot over eight-foot ocean swells, his entire 25 ft. plywood boat jumping clear of the water every time he powered the vessel over a wave. I began to wonder if the craft would hold together under the strain.  The pilot held his position at the outboard throttle just forward of the boat’s stern with that mad smile fixed to his face. He didn’t talk much, other than to point out our destination, which grew from a green-hued smudge on the horizon to an actual island that finally resolved into a marvelous view of coconut trees and beautiful sandy beach.

After what seemed like hours of pounding through the seas, we coasted to a stop in the shallow water on the lee shore.  Our pilot helped us unload our gear, asked again if we didn’t want to arrange a pick-up, and soon departed, leaving us to the quiet  of our private island.

Goff’s Cay encompassed about an acre of land, mostly beach with a raised hummock where a few mature coconut trees provided shade. Previous visitors, probably fishermen, had built a rude thatched structure to shelter themselves from the wind, but it lacked a roof and looked pretty rough.  So we pitched our tent under the palms and sorted our belongings.

We spent three tremendously fine days on the cay.  With plenty of books to read, water to drink, and food to eat, all our needs were met.  We had time for reflection, to lie on the beach and make sand angels,  and to gaze at the brilliant star-studded night skies free from the maddening effects of city lights, with only the sound of the wind, waves, and seabirds piercing the harmony of nature’s silence.  Occasionally a small skiff would pass close to the island, its occupants observing us with questioning looks, but we would smile and wave them away.  Our time on Goff’s Cay was special, the sort of experience a person stumbles into by accident but is never able again to repeat.

2) Our campsite on the island

On the fourth day after our arrival we had a visitor. The lighthouse keeper had seen our evening cooking fires and wondered if a yacht might have been shipwrecked near Goff’s, which is surrounded by an imposing coral reef.  He decided to hop into his runabout and come to make sure all was well. By now our food supply had dwindled, along with our cigarettes and rum.  We appreciated his offer to take us, for free, back to his lighthouse for the rest of the day and then transfer us to Belize City.  We bade goodbye to our island paradise and once again crossed the turquoise sea.

The lighthouse was a fine example of British-inspired architecture, and the keeper proudly showed us its mechanisms and lenses, along with the tiny cottage he called home.  He was a gentle soul, living by himself as a kind of hermit.  Not unlike ourselves, really, lost and far from home.  At the end of the day he returned us to the Belize River, to a dock near the one from which we had departed.  After one more night in the city we headed south, determined to find another Caribbean hideaway that would match our island discovery.  We were never quite successful, but to travel involves embarking on a quest, not reaching a destination.

I hear Goff’s Cay welcomes squadrons of cruise ships these days and has developed into a day-trip spot for hordes of fast-tripping tourists.  The place has moved on, and so have I.  Now older, I dream of the Marquesas, the Tuamotu chain, and Vanuatu.  My dreams have expanded their reach while the world continues to shrink.

3 responses to “Camping on a Deserted Island, Belize”