The year is 2012 and I’ve been seeking illumination about the date of December 21. What better way to find inspiration than to visit a major Mayan site in Central America? So last month we set out for a day trip to the Maya ruins of Lamanai in northern Belize. The route we took involved driving north from Belize City toward Chetumal, Mexico and then embarking in a boat and traveling up the New River. 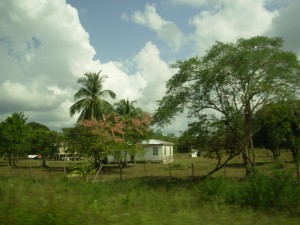 1) the road north – not much to see except small farms

We turned off the highway at a nondescript collection of wooden shacks. Two small outboard runabouts waited for visitors. We boarded without delay and set off through the dry forest along the river.  A baby fresh-water crocodile posed photogenically for us in the lilies near the dock. 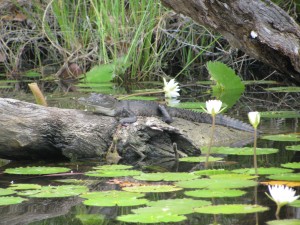 2) Baby croc – only about a foot long: Photo by Shawn Herring

As we wound our way through narrow, snake-infested passageways, the undergrowth soon gave way to open river.  The forest contained plenty of wildlife but was hardly primeval. Still, it was a part of Belize that most tourists seem to miss, preferring instead to delve into the wonders of the rain forest further south. 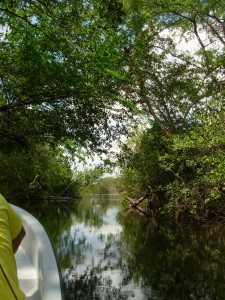 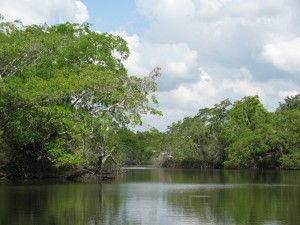 4) The river opens up: photo by Shawn Herring

We moved slowly, in order to examine the critters and their abodes. 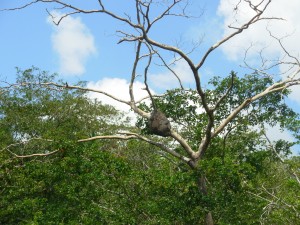 The boat driver was sharp-eyed and called our attention to a variety of birds, including the hard-to-see Mangrove swallow. 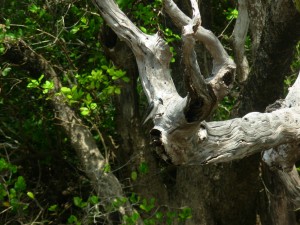 6) Not rare… just difficult to spot

A large Mennonite community had a settlement on the river bank.  The woman in their old-fashioned frocks reminded us of nineteenth-century German peasants as they stood watching us from their wharf. We didn’t photograph them; the action would have been disrespectful, and it wouldn’t do to steal people’s souls with modern optical contrivances. 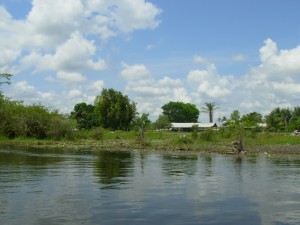 At last the river widened further, into the Lamanai Lagoon, effectively a huge lake in the middle of the bush. Truly a dramatic location, it’s easy to see why the Maya picked the spot, with its commanding views and strategic advantages. 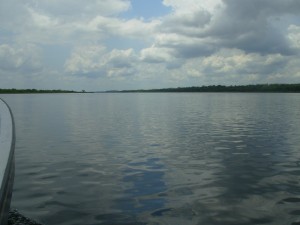 Partially excavated pyramids rose like great buttresses through the trees.  An aura of mystery and sadness hung over the landscape. Unlike its sister cities in Mesoamerica, Lamanai was never abandoned.  The complex was occupied continuously for three thousand years but devastated in the end by European disease and exploitation.   Pillaging Spanish and English slave-seekers did what the environment could not; the culture disappeared quickly and quietly after contact with the outside world. 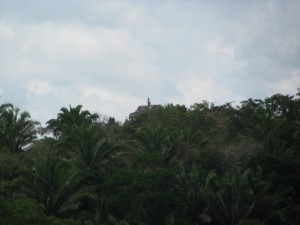 9) Tourists atop a pyramid as seen from the lagoon: photo by Shawn Herring

We debarked from the boat and walked into the city.  A greeter flapped vigorously from his tree. 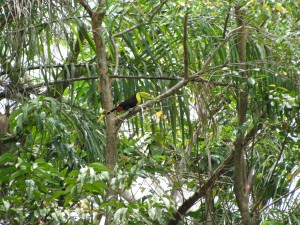 10) Toucan.  I have a nagging feeling this bird may have been someone’s pet

The Belizean authorities have done a good job at uncovering a few of the pyramids and other buildings but most of Lamanai remains buried under a 500 years of detritus and plant growth. 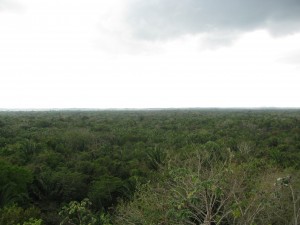 11) Most of the city is buried under intact dry forest: photo by Shawn Herring

We explored the site.  You could see that people had once lived here but the obvious traces were gone. 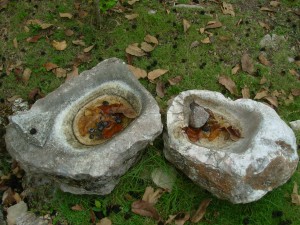 At one of structures the frescoes had been reconstructed. 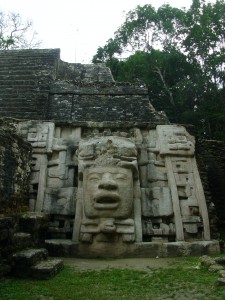 13) Here a face was copied in the plaster – the real version lay underneath, protected from weathering

And of course we climbed the highest pyramid, dodging rain squalls. 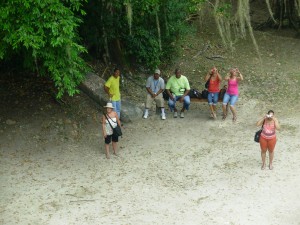 14) Diana looks up as we climb 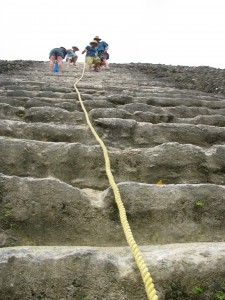 The ball court presented a significant anomaly.  Lamanai’s version was very small, and perhaps merely symbolic. However, in the middle of the pitch, underneath a carved circular stone, archaeologists have found a pool of pure mercury, placed there by the Maya.  Were the ancient ones skriers? Peering into the liquid metal and divining the future like their peers in medieval Europe? 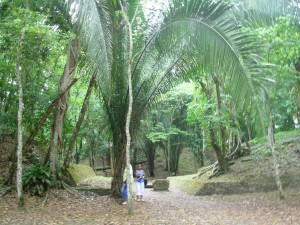 16) The weird ball court. The mercury pool was found under the small stone that looks as if it’s below this woman’s purse.

At the Temple of the Jaguar (a modern name and almost certainly not that of the Maya) the frescoes are original and spooky. 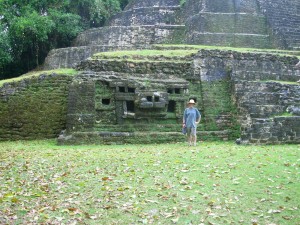 The biggest excavated series of buildings is found here, too. 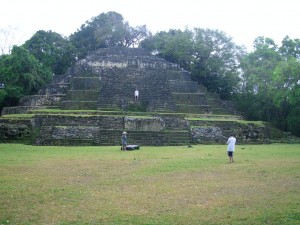 18) Standing near Shawn and his friend, Danny

The rain poured down on us as we stood, baffled by the monumental architecture and by a culture so far removed from ours as to be unfathomable.  So what does that magical date in December hold for civilization? Mostly likely more of the same, the never-ending cycles, the ups and downs along with rebirth and destruction, as humanity blunders its way through present time. Will we be able to avoid the mistakes made by both the Maya and their eventual conquerors?  All indications point to the answer as, “No.” 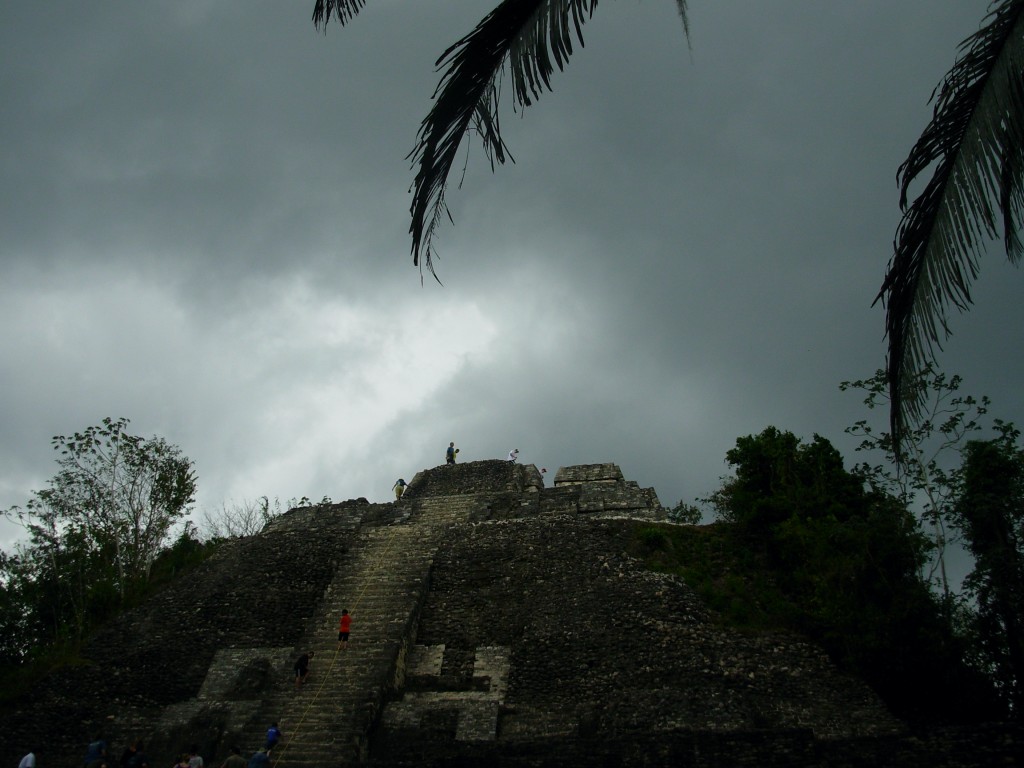 And the Maya are not talking. 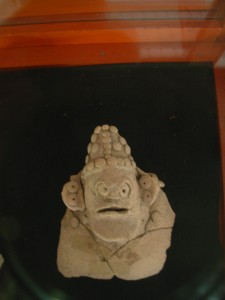 One response to “Belize: Exploring Lamanai”