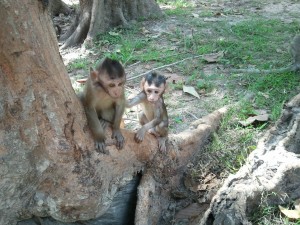 Our time in Cambodia was coming to a close, and our travels were in the homestretch. Myself and my partner, Elina, decided that a nice ending would be to visit the majestic temples of Angkor Wat in Siem Reap.

We hired a Tuk-Tuk driver to pick us up at noon. This proved to be a good idea as many of the potential tourists would be avoiding the midday sun.

Upon arriving we were quickly surrounded by guides offering their services. As we just wanted to be left alone, I resorted to telling the gathering that I was a tour guide. This stunned a few of them to silence. But one still persisted.

“So you’re a guide? Which temple was built first?”
“Uh, this one!” I lied.
I had no idea actually, so I quickly trotted away before he could retort. 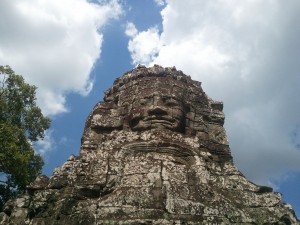 Once inside the temple we were accosted by another guide. This time it was Elina’s turn to make up a story.

We were soon left alone to enjoy the peace of the temple. 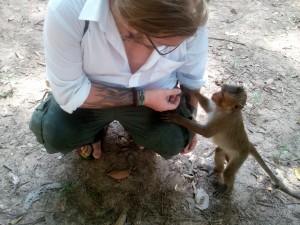 Once we had finished our explorations, our driver took us to the next set of temples. On the road leading to the ruins we were surrounded either side by jungle. We were soon spotting monkeys everywhere.

Nearby a spirited entrepreneur was selling bananas to feed the animals. We couldn’t resist!

Our driver warned us that it is important to feed the alpha male first, otherwise he could get aggressive. After the alpha was sedated with a small bunch we proceeded to share the remaining bananas with the entire group.

More and more of the creatures began to swing down from the trees. Amongst them were mothers clutching tiny newborn babies.

We really got caught up in the moment. Even the driver took out his iPhone (a better model than mine!) and enjoyed taking photographs.

I felt something tugging at my trouser pocket, I looked down to see a monkey reaching for me. His expression was really anthropomorphic. I knelt down and let him hold my hand. He then raised his other arm and slipped it in my shirt pocket where my Angkor Wat ticket was resting. He pulled the ticket out of the pocket. He lifted the ticket close to his face and scanned both sides of it, as if reading to see if it was valid. He seemed satisfied with what he found and then gently returned the ticket to my pocket, before returning to the tree from which he had came. 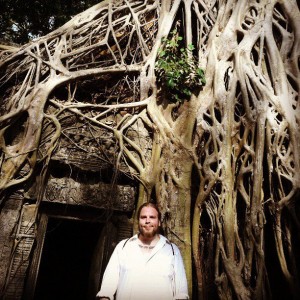 I sat on the jungle floor contemplating what had just happened. A monkey had checked my ticket! Life would never seem the same again.

About the Author: Robert Hotton is an Author and Musician from Guernsey, Channel Islands. He has spent the past several years travelling the world, from the dusty streets of Rajasthan (India) to the micro-climates of New Zealand, and many places inbetween. He is currently documenting as many of his stories as memory will allow.