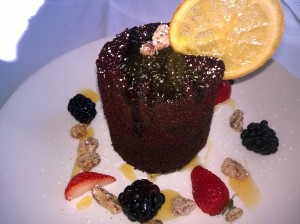 Cafe Del Rey is the place for stunning views in Marina Del Rey. For a romantic sunset or marvelous Mediterranean mouthfuls  by the water, “the food at CAFE del REY is about discovery, simplicity and quality of ingredients.” I can highly recommend the fresh fish and the incredible chocolate tower. I will be back soon for the thin crust pizza which was outstanding.

Have your next meeting with a view in their private room or sit by the fireplace and enjoy a cocktail.

Spend the holidays with Cafe Del Rey and your entire party will be full of good cheer! Join them on Wednesday for Christmas Eve or New Year’s Eve and ring in the good times together.

View from the main dining room @cafedelrey what a view! #visitMarinadelrey

In addition to the prix-fixe menus, à la carte items will be offered in the lounge

Located in Marina del Rey, directly along the marina docks, CAFE del REY offers seasonal dishes that focus on the flavors of California with influences from the Mediterranean region by Executive Chef Chuck Abair. Previously sous chef to Chef Michael Cimarusti at Providence, Abair brings his seafood-driven background to CAFE del REY crafting menus that highlight the bright flavors of the season and emphasize an abundance of seafood paired with housemade ingredients. With unparalleled views of the harbor and a naturally lit, vibrant interior, CAFE del REY provides diners with a casually sophisticated dining experience, representative of the best of what Southern California has to offer in both cuisine and ambiance. Just a 10-minute drive from Los Angeles International Airport, yet ideally located along the tranquil Marina del Rey harbor, CAFE del REY is convenient for both visitors and locals alike. For additional information, please call 310.823.6395, or visit www.cafedelreymarina.com. Like and follow CAFE del REY on Facebook and Twitter.

Afghanistan Journalists: How You Can Help
I Loved My Insight Vacations Luxury Gold Ultimate Italy Travels
Vote on Facebook for our Writing Contest!
Dublin: Marian Keyes on Writing