This is an entry in the We Said Go Travel Writing Contest written by Rona Amichai from America. Thanks for your entry Rona!

Our Balinese taxi driver was very agreeable, with a big smile on his face. He was driving us to the Hotel Alila, our meeting point with the staff of the house we were renting for a three day stay in the mountains near Ubud. There were six of us, my husband, Avi and I, our daughter, Tamar, and her husband Jakob, and their two daughters, aurora aged 4, and Sophia who had just turned one. The driver maneuvered expertly between the intense traffic near the airport, along the faster moving roads near the larger towns of Bali. The roads narrowed, the traffic thinned, we reached Alila and our motorcycle escort. 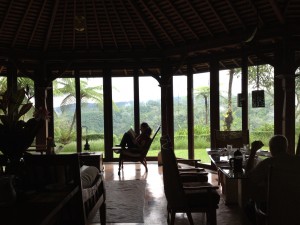 We continued the drive, our driver expertly maneuvering between parked cars, motorcycles that surged all around us, pedestrians, and the occasional vehicle that seemed to be heading right into us from the opposite direction on the narrow country road. And he never lost sight of the motorcycle.

The motorcycle finally swerved into a small driveway. Our taxi followed. It was early evening, I could see the outline of a small building on my left. The house did not appear promising, did not seem to match the beauty of the pictures and the description on their website. It was far from everything, and seemed small and ordinary. What had we done? We were stuck, there was no turning back. We picked up our belongings, and followed the three Balinese who had heralded our arrival, through the doorway.

We emerged from an entryway structure into paradise.

As we walked along a path toward the actual house, there was a fish pond on our left, with stepping stones, lilies, and large golden fish swimming in lazy circles. On our right was a garden through which we could catch glimpses of a dolphin shaped pool. Ahead of us was a wooden door marked with engravings. One of our Balinese escorts, a short, thin lady with a dark ponytail, and small features set in a diamond shaped face, opened the door, and removed her shoes. We followed, lowered our items to the floor, removed our shoes, and padded after her in our socks. There was a small open hallway that opened to a large room, with a long expanse of glass, encased in sliding wooden patio doors, covering the expanse of the far wall. Our eyes were pulled simultaneously to the view beyond, of soaring mountains stretching to a pink sky, shimmering in the glow of the sunset. The ceiling sloped upward to form a cone shape of latticed wood, that reached a point above our heads, in the center of the room. 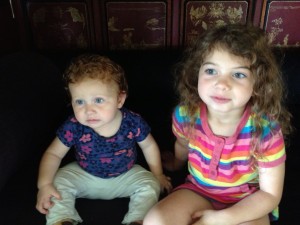 The room was furnished with wood and earth tone furnishings, that blended in with the indoor outdoor feel of the room. There was a trio of sofas that sat facing the wide expanse of view, and a cozy armchair that invited Tamar and her book immediately. To the right of the sofas was a large table set for six. It was 7:00, and were hungry. Avi sat at the head of the table, with the picture windows in his direct line of vision. I sat to his right, jakob sat next to me. Tamar sat across from me with aurora by her side. Sophia, the baby, started on jakob’s lap, but did not confine herself to one seat.

The Balinese hostess reappeared, carrying a large tray. She set soup bowls in front of us.

We did not need a second invitation. It was delicious, cream of squash soup delicately seasoned, with a few croutons and leafy sprigs peaking thought the thickness of its orange depths. Sophia happily ate from Jakob’s spoon. Her soft red curls were still damp from her long trip in the car, her saucer shaped bright blue eyes were opened wide.

Aurora was not so happy. Her hair, a tangled mass of golden brown waves, hung down her back. Her eyes, large eyes that engulf her face, and are a mysterious blend of blue, green and grey, looked at the soup, then looked at us. But our hostess returned with more trays. White rice, plates of cheese, hummus, corn on the cob, and shiny pats of butter to melt into the crevices of the corn. Auroras eyes brightened with anticipation, a big smile erupted on her face. She joined us in our feast.

Sophia wandered over to the coffee table near the sofas, and selected the most appetizing looking fruit from a basket filled to the brim with apples, oranges, and other fruit with fuzzy skins, whose names I did not know. Our Balinese hostess reappeared with a tray of dark brown, freshly brewed coffee, which she proceeded to pour into our cups. What a life. I was loving Bali.