This is an entry in the We Said Go Travel Writing Contest written by Anjali Amit from the USA. Thanks for your entry Anjali!

The twittering birds announce the sun’s arrival. Slowly, the night-black sky changes to dark blue, and then lightens as the fiery orb ascends the heavens. The red sandstone walls of Fatehpur Sikri seem to change color too: the dark red changing with the rising sun to a polished orange-gold. Early morning would be the best time to visit the city — the visiting hours are from sunrise to sunset. 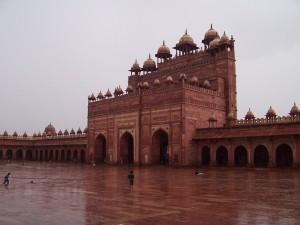 Visiting hours, youwonder? This is not the medieval times, when the gates to the city were shut at night to guard against intruders. True, the times are modern, but the city is medieval. It was built four hundred years ago by the emperor Akbar; built, lived in, loved in, and abandoned.

Fatehpur Sikri is probably the most dazzling abandoned city in the world. It was built to be the capital of the great Mughal empire, and not just the administrative capital but the cultural and artistic hub as well. Artisans of all stripes were housed in their own studios and workshops. The library was well-stocked. The markets bustled with traders from all over the world. Fatehpur Sikri was bigger and more fascinating than London. Why would the emperor want to move away? There are many conjectures — lack of water, strategic necessity — but no definite answer. The emperor left, and his subjects followed. The city became a ghost town. 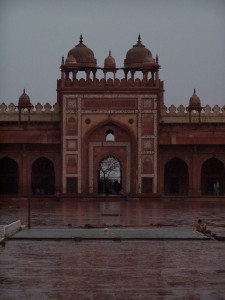 Is that Tansen’s voice you hear at the Anup Talao (Peerless Pool)? Tansen was the court musician, so skilled that his singing could set the lamps aflame. On one occasion, rapt in his raga (traditional melodic pattern in Indian music), he set himself on fire. His desperate daughter sang the raga that calls down the rains, to douse the flames.

Birbal’s laughter still echoes in the Diwan-e-Aam: the spectacular Hall of Private Audience. From the outside the building appears two-storied. Step in and you see that it is one large hall, with a delicately carved central pillar. and balustraded walkways connecting the central seat to the four corners. It is here that the emperor held his Thursday discussions. 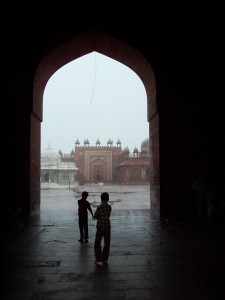 The delicately carved lattice screens bring to mind princesses and peacocks, scented waters and a life of languor. Each building had a specific purpose; be prepared to hear two different raison d’etre for the same structure! Was thebuildingknown as Ankh Michauli (Hide-and-Go-Seek)Akbar’s playground or the Royal Treasury? Who played on the giant Ludo board (parchisi) set in the ground?

The names of its buildings are like pearls strung together: Khwaabgah (House of Dreams), Panch Mahal (the Five Palaces), Sunehara Makan (Golden House) and many, many more. All the buildings still stand. Walk the grounds and you may sense the spirit that informed the place.

The story of the city’s birth is interesting. By the time he was twenty six years old Akbar was the ruler of the most powerful empire of the known world, and he had no heir. “Go to Sheik Salim Chisti,” he was told. “He can make any wish come true.” Akbar asked of the saint and was blessed with a son. Salim, the son was named.

Maybe the young ruler felt the need to move closer to the saint. The city rose from the thorn-infested flats in fifteen years. ‘Instant city‘, they called it; a minor miracle. Minor miracle or major, the city began as the response to a miraculous gift.

Fatehpur Sikri may be dwarfed by its more famous neighbor, the Taj Mahal, but in its synthesis of many schools of thoughts it is the finest example of Mughal architecture. Enter through the Buland Darwaza — the highest gate in the Indian subcontinent. Maybe even the highest in the world. The point is not how high it is but what its height proudly proclaims: Enter if you dare into the city of miracles and mysteries, the city of splendor and hope.

Much remains of the city of Fatehpur Sikri. And sculpted into the stones is the hope of one young ruler who saw the best in all beings.

Writers: Are You Contagious Yet?
Inspired by over 500 writers!
Ms. Magazine: Lilly Singh’s Late-Night Milestone is Just Her Latest Bawse Move
Scotland: Inspiration in St. Andrews