Ayers Rock, Australia: The wonder of nothing 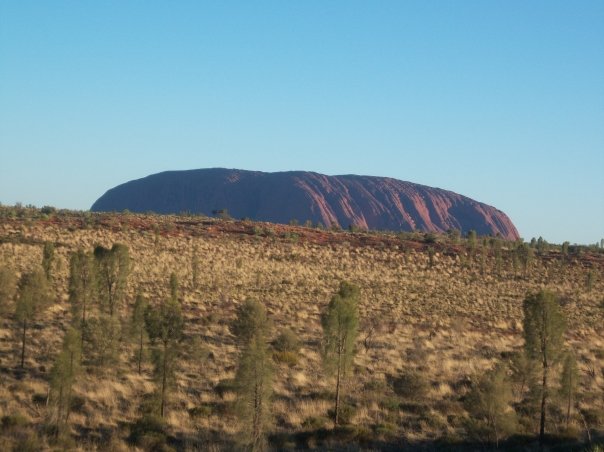 For the dung beetle – a native of this land – the race was on. Before long, the midday heat would ignite the earth so much that the tiny soles of his feet could barely tread the burnished ground below.

And so speed was of the essence.

He darted to and fro – a daily and punishing ritual – because he knew that when his work was done, he would be rewarded with escape from the brutal rays.

I was not a native. In fact, this was the first time I had ever been to Australia, and the parched landscape of the outback held no fear for me. Only wonder.

So, since I awoke some seven hours previous at 4am, I had simply walked and watched. And from the time this land woke from the darkness of night, I had felt like a tiny shard, wilfully trapped inside an ever-turning kaleidoscope – the emerging daylight changing the terrain with every moment that passed.

Once the sun had gained her daily dominion however, the kaleidoscope would come to a juddering halt – the mesmerising psychedelia replaced by a solitary block of colour.

This was why they called it The Red Centre.

It was nearly 100 degrees but my adventure, unlike that of the fast-escaping dung beetle, was only just beginning.

I’d arranged to meet my guide at the cultural centre. This is where I’d start yet another trek and embark on a much needed crash course in Aboriginal culture. Here, Aboriginal artefacts, each bearing an intricate design, hung from every wall.

“They all tell a story. Aboriginal art is all about stories”.

The voice was authoritative and, as I turned to face Apari, I immediately noticed an austere look. His lean face was lined with wrinkles and a starched khaki uniform completed his almost military look. This must be my guide.

“We need to leave now. Let’s meet by the wall”.

He spoke in syncopated rhythms that had a hypnotic effect so I, and the other eight members of our group, followed him obediently.

We set off. No one cared in what direction.

The fierce crimson of the desert undulated as far as the eye could see. It was punctuated by nothing; though through the heat haze, minute rainbows of dust particles could be seen trailing our every footstep. Apari promised that beyond the horizon was a local source of water. That was unimaginable. There was no oasis here. He told us, too, of the vegetation that was important to Aborigines – the mulga, for instance, a tree whose bark could be used to make tools and catch termites. But here, in this infinite desert, I didn’t believe in trees.

Not that the vast emptiness wasn’t appealing; it had seduced me from the moment I laid eyes on it. And even now, at the height of the day and at the mercy of 116 degree heat, I longed to continue walking.

Apari’s sudden announcement that we would be taking the “express route” interrupted my wish, but when I looked up to see the gigantic eyes of Katka – one of the camels that were waiting for us – I was content with my new mode of transport. She bowed obligingly and our journey took on a new pace.

We must have been trekking for a long time.

The orb of the sun was dimming all too rapidly, and I was thrust back into my dazzling world of colours.
“We’re here” came Apari’s nonchalant declaration. And as Katka’s gait slowed and came to rest, it was there.

Amidst the recumbent ground, it soared.

The reverie was complete. There, in that moment, I could fathom nothing but understood everything.

We stayed for a while, transfixed by the beauty of this natural giant. I remember thinking how ironic it was when Apari told us that the word “Uluru” had no actual meaning in the Pitjantjatjara language.

Time passed all too quickly there, and yet was non-existent.

Though I was reluctant, the time came to let Katka turn her back on Uluru. She dropped her head, as if to mimic my disappointment at us leaving and resumed her steady pace. We headed grudgingly towards reality.

On our return, the sky took on its first hues of ebony. It would soon be flooded by night. Then, and only then, did I feel the first hint of fatigue.

I remembered the dung beetle, the fearful native who would probably be just waking to start his frantic day. Now he would take his opportunity to scuttle beneath the darkening heavens.

For a moment, I envied him.

About the author: Miriam Thomas graduated in 2006 and spent several years in teaching. She has travelled across Australia and New Zealand and has a strong desire to visit Japan in the near future. She currently works in Milton Keynes and is keen to pursue her love of both travel and writing.

The Magic of Moab
A Step Out of Time in New Orleans
The Sisters at Petra, Jordan
The Island of Prince Edward, Canada