Australia: The Head of the Carpet Snake 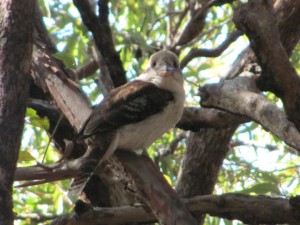 I waited at my hostel on Magnetic Island, sipping my coffee and eating my breakfast, until my travelling companion for the day arrived. Our goal was Mount Cook, a 497-meter peak in the middle of the island. It rose from the ocean, thickly forested in numerous species of Eucalypt, and had no “official” trail to the summit. The Indigenous people believed that a great Carpet Snake slithered its way south, along the coast of Queensland, leaving its body in segments, which ultimately formed the various islands in the area. Its head is now known as Magnetic Island.

Soon Alex, a young vagabond from Germany, walked from the nearby bus stop. I gathered my backpack to join him, and we set out for Mount Cook. The maps in our possession were simple tourist type but cartographic ineptitude notwithstanding, we carried on.

The morning was clear and brilliant, without a cloud in the sky. As we pressed on along the lapping waters of the bay, I noticed a seashell, brilliantly white and almost wholly intact; the outside was smooth, like porcelain. I slipped it in my pocket and continued on. It was still cool out when we spotted a diminutive Rainbow Bee-Eater alight upon a branch of a deadfall. Its bejeweled back glistened in the dawn light like any precious gem. When the small bird took flight and disappeared into the underbrush, we turned into the bush.

The pungent odor of eucalyptus mingled with the familiar scent of grass. Branches, logs and leaves crackled and shifted under our steps. A cool breeze rattled the branches overhead, and the lorikeets and cockatoos announced their presence. It was a symphony worthy of the oddly shaped opera house down south and one I needed to calm my soul.

The elevation soon began to increase, and with it, so did the amount of boulders. Soon we were jumping from rock to rock, weaving our way through downed trees, saplings and bushes. Before long, we encountered a large rock precipice that overlooked the forest canopy and out into the Pacific. Brilliant shades of green and a few shades of brown dotted the hills below us.

We had been hiking from many hours, and the sun would soon begin its descent. We decided there to end our attempt to the summit. All we were really after was a wilderness reprieve, conquering a mountain was secondary. But a curious thing happened on those rocks.

I rested my head on my backpack, view of the ocean in full sight, and sucked down my water. As I laid there, the afternoon sun searing the rocks, I suddenly heard humming coming from my right. After I realized Alex was on my left, I quickly shot up to locate the source. It had stopped, but as I looked about hopelessly, an image on a nearby boulder began to take shape. Slowly I began to see the head of a Carpet Snake emerge from the huge rock, its profile and eye clearly defined as it gazed vacantly upon the ocean. 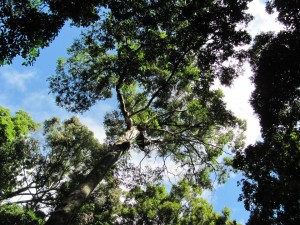 I leapt up and ran over to it, scaring Alex a bit as I did. I told him of the Indigenous story of the island and how we had unintentionally found the head from the myth. At that moment, I was hit with the understanding that someone or something had led us to that sight. Our trek had twisted and turned without any real direction except up, and without the soft humming, the Carpet Snake probably would have simply melded with the other boulders of our rest area.

With the weight of understanding on my shoulders, I shoved my hands into my pockets. My fingers lightly grazed the seashell I had found on the beach that morning. I took it out and examined it once again. It was nearly flawless, and its spirals reminded me of an abstract marble sculpture. I looked from the shell to the rock and knew I was meant to leave it there, a small offering from the sea upon which the head had gazed for eons. I placed the shell in a crack in the boulder, and we gathered our gear for the long hike back.

During our decent, we chatted about life, jobs and plans, and we eventually made it to where the stream flattened and the boulders ceased. I jumped from a root into the soft sand of the lowered stream bed, and the forest erupted in a cacophony of flapping turquoise wings. Butterflies by the thousands flittered by our faces and flew to the nearest shelter. The entire forest was littered with black and blue butterflies, from the ratty bark of the Paperbark tree to the thick leaves of the gum trees. It was as though the forest and the island wished us well for the rest of our journey.

About the Author: My name is Hunter McBryde and I am a zookeeper, working mainly with reptiles but with a passion for all wildlife and a deep reverence for those wild places. I currently live in Queensland, Australia, quite a hop, skip and a jump from my home state of Pennsylvania. Check out my blog.

4 responses to “Australia: The Head of the Carpet Snake”