There was no one for at least 50 kilometers in any direction; Lockie, and I had searched the entire day for a Perentie. We didn’t find anything during day but that evening, after supper, we decided to check part of the escarpment we had missed. It was the middle of winter and temperatures drop to 35-40 F at night so Perenties would usually find refuge from the cold in caves and burrows. There would also be some incredible creatures we could potentially find at night. We left camp around 5 PM with sun just starting to set. 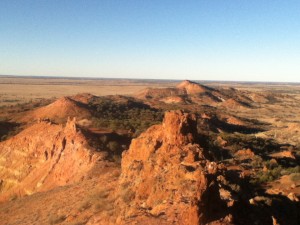 We found two species of gecko, a snake skeleton and a King Brown snake shed skin, but no Perentie. Night eventually took hold and by 8 PM we decided to head back to camp. I followed Lockie as we made our way back, but suddenly he turned around and asked if we were going the correct way…I had lost all sense of direction.

We took a short break at an enormous rock. After 5 minutes or so a car passed along the horizon, close to 2 kilometers away. We set out for the road in an attempt to make a fresh start. When we found the road we assumed it would be a fairly straight forward walk to return to the ute and our camp but we soon realized that we were again on the wrong path. 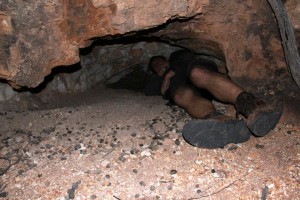 Suddenly and quite out of nowhere we saw a bright orange light through the trees. I thought, as soon as we saw it, it looked extremely odd. It resembled the beam of a flashlight and seemed to respond when we flashed ours. We assumed it was the owner of the property so we began to walk towards it in the hope of rescue. Although the light looked as though it moved forward and up and down hills and around trees, it never actually made it any closer to us. After a half hour or so of walking towards it without gaining ground we decided it couldn’t be the land owner.

We again set out for the road and when we found it we broke down our desperate search military style. Lockie remained on the top of the escarpment, no more than 50 meters away and I stayed at the bottom. We shouted back and forth at intervals announcing that we still had the ridgeline because we knew that camp was along that ridge somewhere.

It was all to no avail. I rejoined him at the top of the ridge and admitted we had better start looking for a cave to sleep in. Our flashlights, we suspected, would soon be extinguished and it would better to be out of the cold and wind before they did. While we were walking back to a series of caves we had just passed, the orange light suddenly appeared again. We were more hesitant this time and waited, watching it move.

The light shifted again as though it were being carried by someone. I began shouting to it to see if it responded. It flashed at us a few times but made no noise. It looked as though it were coming closer yet stayed a fair distance away. We watched for about 20 minutes, finally relenting and began walking for the cave. The light followed us as we did, seemingly dancing just beyond our reach.

We bedded down in a small cave, barely big enough to fit the two of us. I didn’t sleep a wink and we were devoured by mites, fleas and any number of other parasites. First light came painstakingly slow, but as soon as it arrived we again began our search for camp. It was only about half a kilometer away. We were so close and yet camp could have been in Europe by the way we felt that night.

Lockie and I talked about the eerie light for the rest of the trip, trying desperately to ascertain what it could have been. It wasn’t until the day after we returned that I received a text from Lockie’s housemate. He explained it was the Min Min Light and couldn’t believe I had yelled at. The light is supposedly a spirit that follows travelers in the outback. The indigenous people used to tell their children it would take them away if they acted up. We had encountered something beyond our understanding and emerged on the other side, but we were keen to learn more from that arid environment.

Must Stop Places in Wine Country: Millennial Edition
The Lowdown on High Tea: Eating in Britain
UN World Humanitarian Day 2020 #RealLifeHeroes
Why I began to travel?