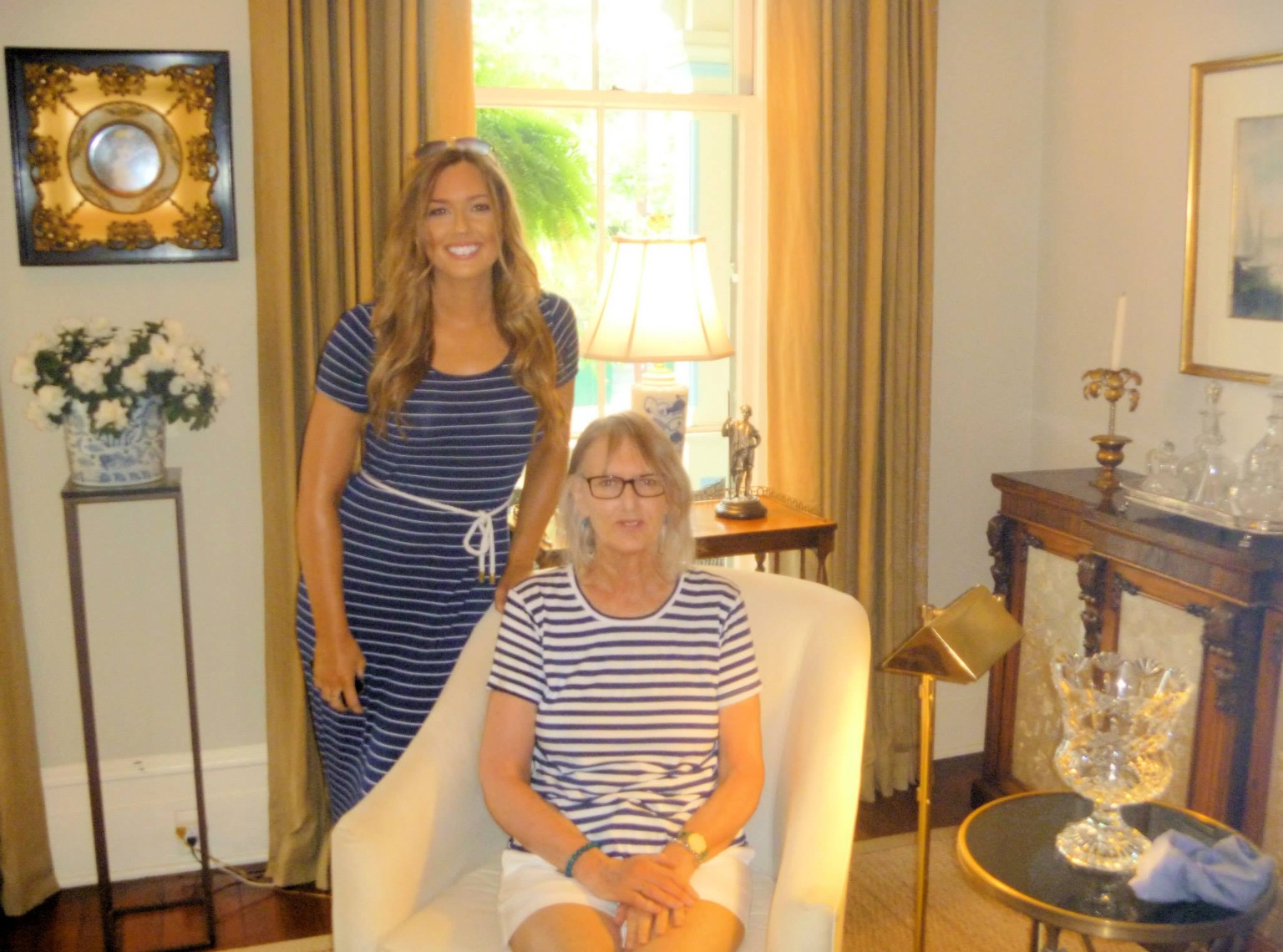 Savannah, Georgia – picturesque, charming, immersed in history and haunted. A pleasant drive from Atlanta where my daughter, Amy is currently living, it is a place I had always longed to visit. Like many others I was fascinated by the depiction of the elegant and eccentric Savannahians in John Berendt’s 1994 book Midnight in the Garden of Good and Evil.

In September this year Amy and I spent five days in Savannah. We stayed at the delightfully furnished and comfortable Catherine Ward House Inn in the historic Victorian District, close to Forsyth Park.

The locals come out to the many well-tended parks in the cool of the early evening. Under the eerily hanging Spanish moss they walk small well-groomed dogs, jog, throw frisbees, play baseball or just sit conversing on the park benches. We tried to pick which bench in which park the Forrest Gump film character sat on and uttered the famous line, “My mama always said life was like a box of chocolates …”

The Southern courtesy and genteel friendliness of the people are part of Savannah’s charm. “Have a blessed day,” is often said in farewell.  One young man, strikingly handsome and garishly tattooed, addressed me in a polite drawl, “Ma’am, you have a very beautiful daughter.” He then inquired of Amy, “Are you happily spoken for?”

A cheerful and pretty woman whom we met was related by marriage to Jim Williams, the late art dealer of Midnight fame and owner of Mercer House. She said with pride that Jim had done a lot for Savannah through his involvement with the Historic Savannah Foundation.

Mercer-Williams House, situated on Monterey Square, was a five minute walk from our accommodation. We stood outside this beautiful red brick mansion late one afternoon under an umbrella as soft rain fell. We contemplated its tragic history: not only the shooting death of Jim Williams’s assistant, Danny, but in 1913 the owner at that time fell from a second floor bannister and died; in 1969 a young boy chasing pigeons plummeted from the roof and was impaled on the iron fence below.

As we gazed at the house a woman came out of the front door − we presumed it was Dorothy, Jim’s sister who now lives there. Tourists can still visit the house but because it is a private residence tours are limited to certain areas. We did not bother. Instead we went to Owens-Thomas House in Abercorn Street.

The tour of this grand house was well worth it. The English Regency architecture is magnificent. There is a surprising indoor bridge on the second floor. Standing in the slave quarters is a sobering experience, although the tour guide pointed out that the slaves were better treated than those on neighbouring plantations and were even sometimes paid for their work!

The Marquis de Lafayette, who had fought alongside George Washington in the American Revolution, stayed in Owens-Thomas House in 1825 and addressed the citizens of Savannah from a cast-iron balcony there.

We ate at the restaurant of the disgraced celebrity chef, Paula Deen. The food was enticing. However we both felt bloated afterwards. I suspect our greed at ordering the delicious banana cream pie and lattes to finish the meal was a mistake.

The Olde Pink House Restaurant was the highlight of our dining experience. Built in 1771, it has a pink stucco exterior and bare wooden floors.  In the candlelight we kept glancing at shadowed corners, alert for the presence of ghosts − not malevolent, just mischievous the restaurant staff will tell you.

Savannah has been called the most haunted city in America. We took a ghost tour in a genuine old hearse. Our guide was a witty John Lennon look-alike with frameless spectacles, a pony tail and a vast knowledge of local history and hauntings.

The Bonaventure Cemetery on the outskirts of town is a haven of serenity and gothic beauty. Amy and I strolled along the tastefully sign-posted paths between the sepulchers late one afternoon. Apart from a small quietly respectful tour group, we were the only living souls there.  We found the grave of Little Gracie, a child who had died in the 1889 yellow fever epidemic. We were almost hoping to see her as others claim to have, playing on the trimmed grass around her tomb.

We sat by the grave of Johnny Mercer, Savannah’s renowned song writer, listening on Amy’s iPhone to the gentle lyrics of Moon River. The Spanish moss draped down from the ancient oaks around us and there was tranquility in the sultry Georgian air.

About the Author: Judith La Porte is a former librarian. She has had four short stories published in Narrator Australia. She is a member of the ACT Writers Centre. Find her on Twitter.

Are You Ready to Take It to the Next Level? #IMakeaLiving
Reunion: Living Life "As Is" Or "So Perfect?"
Bradenton, Florida: Ain't Nothing Like the Real Thing
Georgia, Blue Ridge Mountains: Travel That's Good for the Soul