While our original intent had been to spend two nights at Orog Nuur, a remote lake in the Gobi, a combination of heat, mosquitos and, unlike the previous afternoon, very few birds to see, we decided that we would travel on north.

After having lunch on the north side of the lake, where we saw some avocets and demoiselle cranes, my driver/guide Khatnaa worked his sturdy silver Land Cruiser through very thick vegetation on a brutally rough “local” earth road to get to the main route to Bogd, a soum center, where we re-filled our water containers from the local well.

Then it was up and away from the Gobi to the Hangai Mountains, a part of Mongolia that I had not been to before my two-week camping trip in July 2010. 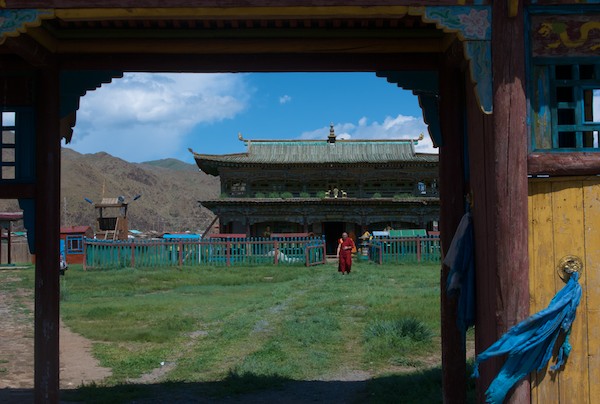 We stopped for the night a short way off the road, after having passed through three changes in vegetation as we went up in elevation. It was cold and windy, quite a change from our previous warm and mosquito-enhanced campsite by the lake.

The next morning we drove into Bayanhongor, an aimag center which is quite a substantial town. We trekked around town buying petrol, eggs, bread and meat. It was an energetic, busy place which had nice paved streets in the central area and a brand-new two-story shopping center sheathed in bright silver metal. There was a large well-stocked supermarket on the first floor. The second floor had just started to be occupied by small local businesses in spaces that ranged from the size of a small booth to a few hundred square feet, so it was very quiet and clean. And quite a contrast to more the commonly seen container market that was our next stop, which was noisy, crowded and dusty, but lots more interesting.

Stopping at a traffic control booth on the way out of town we found that the road Khatnaa wanted to take had been washed out by recent flooding. Consultations with some of the locals ensued and an alternate route was suggested, which led directly north up the valley of the Tuyn Gol, which I found was dotted with white gers and yaks, looking like a wonderful place to spend a Mongolian summer.

We traveled on a very nice earth road to the soum center of Erdenesogt, home to the Gachen Lama Monastery, neither of which I had ever heard of, much less knew anything about.  The soum center was typical, except for the lovely setting above the river. The monastery was anything but.

The main temple is one of the most exquisitely beautiful buildings I have ever seen. It has a typical Asian roofline and was probably designed by artisans from Tibet or Nepal. The enchanting open fretwork on the second level gives the building a light, airy feeling. Every vertical surface is a riot of multi-colored carvings of animals, gods, guardians and plants. There are peacocks, elephants, lotus flowers and auspicious symbols in faded blues, greens, pinks, whites and golds.

And what makes it almost unbearably poignant is that it is the sole surviving structure, other than the entry gate, that is left on the site from the destruction of the monasteries which took place all over Mongolia in the late 1930s, when the communist government took a Stalinist turn for a few sad, violent years. There were originally ten temples.

But today the monastery is alive again and was bustling with activity the afternoon we visited in anticipation of a visit the next day by a prominent Tibetan Rimpoche (teacher), who was going to preside over the dedication of two new statues that were to be installed in the new temple next door which was built in 1990, making it also a 20th anniversary celebration.

The old temple was filled with people, many of them elderly women wearing beautiful brocade del. Upon entering, we found that they were preparing hundreds and hundreds of printed Buddhist sutras which were to be placed in the statues. There was a real assembly line going. Some monks were rolling the small strips of paper up very tightly. These were handed to the women who then wrapped them in sewing thread. After a few minutes of watching, Soyoloo, our cook, reached down, picked up three of the rolled sutras and handed one each to Khatnaa and I, keeping one for herself. Then she got us each of spool of thread. Suddenly we weren’t onlookers anymore, but participants, truly a gift. We each conscientiously wrapped our sutra and added it to the growing stack. Amazing to think that I’ve left a little bit of me in such a special place.

About the Author: Susan Fox— I am an oil painter who specializes in the animals, land, people and culture of Mongolia. I’ve traveled there seven times since 2005. You can see my work and learn more about the Land of Blue Skies at www.foxstudio.biz, which is also the home of my blog.

Turkey: In the Sultan's City
How 24 hours in Mongolia changed my entire life
Qatar: The New Center of the Universe?
Donegal, Ireland: A Place I Love