South Africa: An Alternative Weekend for Me

This is an entry in the We Said Go Travel Writing Contest written by Melissa Coleman from England. Thanks for your entry Melissa!

After just 2 hours in The Green Elephant hostel, Cape Town, I met an American group who invited me to join them for their hike up Table Mountain.

Sunday morning soon arrived as did the foot test after yesterdays jaunt around town … they passed well enough for me to don my hiking boots and join the girls for a trip, I was told, up Table Mountain. I was just so excited – how lucky was I to meet a group I could go up with it’s all I was hoping for all weekend! I introduced myself to their tour guide and away we went. Once we were parked up and vacated the vehicle to commence the ascent, I was slightly perplexed that we were in fact at a point OPPOSITE Table Mountain and most certainly NOT about to climb Table Mountain. This hiking group was blissfully unaware that they were in fact about to be climbing Lion’s Head; widely regarded as being trickier than Table Mountain itself.

Once we had swiftly removed ourselves from the path of an ambulance, which I later found out had actually been the last day for an extremely unfortunate hiker, slipping to his death on the way down, we started our trek in the ridiculous temperature of 29 degrees Celsius. Most groups start the hikes at sunrise … it was now 10am and the sun was just teasing, getting ready for its full onslaught in a couple of hours. Which would inconveniently coincide with our descent.

The views of the city on the way up were just spectacular! I spotted Sea Point just to the left of Signal Hill, Cape Town Stadium, the dock, then Clifton Beach and the lovely inviting ocean to cool us off … no such luck.

What started off as just a dusty path, albeit fairly steep, managed to turn into the most exhilarating rock climbing up a cliff edge I think I have ever done! All the water ran out, ankles had been over turned and sun cream was not being applied as frequently as SPF warnings would have suggested I am sure. But, we all made it to the top and were very proud of ourselves. Just one question that was being whispered … how on Earth would we get back down?! 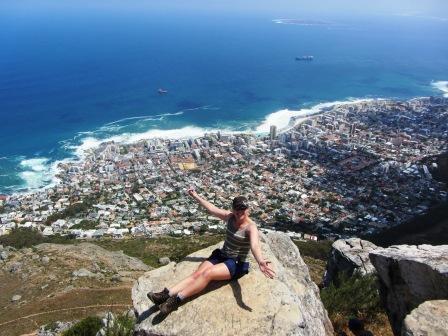 We took a few minutes to absorb the beauty of the view and cool off in the breeze before even contemplating our descent. After a lot of bum-sliding, triceps-testing, brain-activating-slowly methods, we all made it down and after a 2.5 hour round trip we were a little exhausted and jelly arms and legged to boot!

Having been delivered to the V & A Waterfront I had a bit of a funny turn, head whizzing, hearing gone crazy, eye sight blotchy and the biggest sweat attack ever! I was pretty sure I was about to pass out, be sick … or something else … or maybe all three? It was slightly bad timing as all of the American’s had just left on the ferry to Robben Island, so I was on my own to guard my drink, my bag and deal with myself. Not quite sure how but I made it to the bathroom after asking the waitress not to take my drink, and gave myself a good dousing of water and just sat on the floor for what seemed like hours trying to get myself back to normal.

A little bit too much sun I think. Cider perhaps wasn’t the best reward after all, but, being British I didn’t want to just waste it so I persevered until every last drop of the pint had gone … literally 2 hours later I was ready to leave! I was not about to face that dreadful walk back up through Woodstock to Observatory again so I found the minibus taxi rank and boarded, along with 17 others who had just finished work and were in no mood for the deafening ‘bling bling’ rapster/reggae combo music blaring out shaking the van and bursting out of your chest. I had to leave them at the train station and find the connecting ride towards Wyneberg in order to get home. As simple as this may sound, just imagine an airport car park, now imagine all of the cars replaced with once-white Toyota people carriers with their drivers shouting, heavily accented, their destination; that is the sight I was faced with.

Success, another crammed journey but I made it back to the hostel unscathed!
My reward for such an unusual day out was to eat my body weight in macaroni cheese and vegetables, with ketchup of course. Yum! What a wonderful ending to another brilliant experience in this fascinating country.

About the Author: Melissa Coleman

I am currently volunteering at Baphumelele Children’s Home in Khayelitsha, Cape Town, where I am initiating the successful growing of vegetables in order to market and sell to help them on the road to becoming self sufficient. Once my 6 months is finished I am going back to England to prepare for my 10,000 mile drive from London to Mongolia which will hopefully raise lots of much needed funds for Baphumelele. Very exciting challenges and lots of travel writing to come! Please visit www.theeventualists.co.uk

London: Blooming Beautiful with Flowers and Fauna
Goreme Turkey: If You Look You’ll Find Yourself
London: Legacy of Empire
A hidden lake found in Los Angeles