Liverpool: This is Anfield 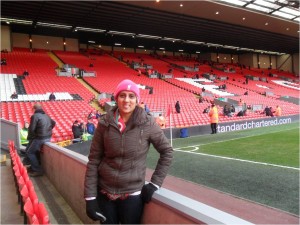 While planning my trip to visit my brother in the UK, going to Liverpool was top of my bucket list. As a passionate Liverpool FC supporter, I was prepared to do anything to cross this off my list. I made all the arrangements for my trip to Liverpool and spent half of my earnings on a ticket to watch Liverpool vs. Tottenham at Anfield.

Being South African, the weather on that side of the world was extreme for me so I piled on a couple of layers and departed London Euston Station on a freezing, snowflake scattered Sunday morning at 09:15 am. I arrived at Liverpool Lime Street Station three hours later. As I stepped off the train, I was struck by a surge of emotions that overwhelmed me. I exited Lime Street Station and took a cab to Knowsley where I was booked to spend the night at the Holiday Inn Express. Along the way, we passed sign boards pointing to Anfield and that’s when I realised what that rush of emotion was – being in Liverpool felt like I was home.

I anxiously checked my GPS to ensure that we were heading in the right direction. The drive seemed longer than expected as we headed towards the outskirts of Liverpool city. I eventually reached the hotel and handed the driver a £50 note. He gave me a stern look and said “don’t you have smaller change; we don’t often get £50 notes.” My heart thumped nervously, he seemed unimpressed. I asked if he had a card machine and, just my luck, it was out of order. I ran into the hotel for change, paid the driver and headed back to the hotel to check in. The receptionist handed me my match ticket, excitement rose within me. I was going to Anfield!

After taking the time to get dressed up (just in case Steven Gerrard happened to spot me), I called for a cab to Anfield. The cab driver was a big built, bald, friendly man. Along the way, we conversed about soccer and exchanged holiday stories, he told me that he’d love to visit South Africa but it was just too hot which was not good for him because he can’t stand the heat. I listened carefully, trying to decipher every word of his Scouse accent. We eventually reached Anfield. I paid the driver, thanked him and bolted out of the cab. My excitement grew fast and I couldn’t wait to get into the stadium.

This Is Anfield. I looked up from the street to the sight of my dreams. I entered the gates and made my way to the stadium. My ticket included lunch so I filled my tummy before heading to the stands. The steward checked my ticket and directed me through the doors. As I walked down the stairs to find my seat, each step took me closer to the field. My heart pulsated through my chest. I was seated in the front row, a mere stretch away from the field. Brad Jones (Liverpool’s second goalkeeper) soon emerged from the tunnel across the field and headed towards me to warm up. Shortly after, the rest of the squad joined him. I had stars in my eyes – Gerrard, Sturridge, Suarez, Agger, Lucas, Carragher, etc. I instinctively waved at them, thinking they’d recognise me since I see them every weekend. I quickly dropped my hand when I realised that they don’t know who I am.

My dreams were unfolding before me, a front row seat at Anfield, and the players not far off. The stadium soon filled up and the players ran out onto the pitch again. That’s when my dream was perfected. The anthem filled the air “When you walk through a storm, hold your head up high and don’t be afraid of the dark, at the end of the storm, there’s a golden sky, and the sweet, silver song of a lark. Walk on through the wind, walk on through the rain, though your dreams be tossed and blown. Walk on, walk on, with hope in your heart and you’ll never walk alone, You’ll Never Walk Alone.” Tears filled my eyes as I sang along with the crowd.

Liverpool won 3-2 in a very high paced game with nail biting moments. The atmosphere was electrifying, I screamed with elation at every goal we scored and cursed at every decision that went against us. It was a day which brought me closer to my team, to a city that felt like home. I departed Liverpool the following day with tears in my eyes, feeling as if I were leaving home forever. One thing is for sure though, I will return but for now Liverpool and Anfield are firmly cemented in my heart.

About the Author: Deepa Chibba: I am a passionate football fan that loves the adventure of travelling. I love animals and believe that they need us to protect them and love them unconditionally. Twitter handle – @deepa910

Indian Rock Garden: A Peerless Creation in Chadigarh
Japan: The Ramen Shop at the Top of the World
Whangamata: The flood of memories
London Callings: Originality counts?

4 responses to “Liverpool: This is Anfield”