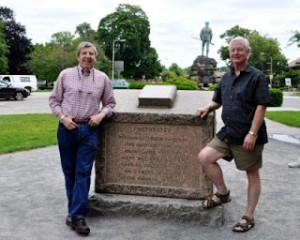 Bill and I have been RVing across North America, free to be where we want to be, do what we want to do. Concord, Massachusetts was not part of our itinerary but the Millers, Bills friends, invited us to visit with them. Am I glad we did! Doug showed us how the city was the center of two American revolutions, the political revolution that ended in American independence and the literary revolution that influenced the mindset of mid-1800 America, leading to the Civil War and the abolition of slavery.

The Minutemen National Historical Park links the cities of Lexington and Concord, Massachusetts on a trail of significant events surrounding the start of the American Revolution. Paul Revere took a ride on the midnight of April 18, 1775 to warn the Concord militia of the impending arrival of British troops. The lantern from the Old North Church would signal, ‘one if by land, two if by sea’. 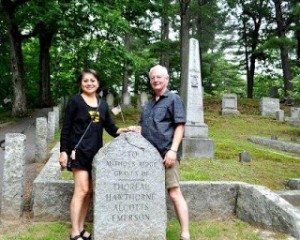 The British troops, numbering 700, proceeded to Lexington from Boston. Their mission was to retrieve the cannons being held in Concord. At Lexington they quickly scuttled the rag-tag colonial militia. But around 400 minutemen (in a minute they can be ready for battle) were assembled in Concord, having been alerted. On April 19, 1775 at the North Bridge, the ‘shot heard round the world’ was fired.

The news quickly spread to the surrounding towns and the colonists’ ranks swelled to 20,000. They quickly drove the British back to Boston. More than 250 British soldiers and less than 100 colonists lost their lives. The fighting then resumed in Boston and on June 17, 1775, The Battle of Bunker Hill gave the colonists an astounding victory, pushing the British further south. The cannons were never found. 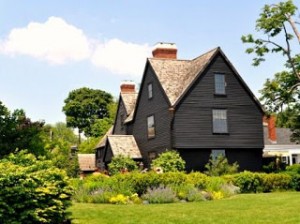 The war lasted a few more years but on July 4, 1776, the Americans declared their independence. Then they went through a renaissance. Concord, with Cambridge to the southeast and Salem to the east became the seat of excellence in education and literary works in the mid-1800s. Five great American writers, the Concord Quartet and Louisa Alcott, lie together in eternal peace at Author’s Ridge in the Sleepy Hollow Cemetery. That evoked wondrous feelings in the fledgling author that I am.

The Concord Quartet is composed of: Ralph Waldo Emerson (1803-1882, An American Scholar, Nature), essayist and philosopher, Henry David Thoreau (1817-1863, Walden, Civil Disobedience), philosopher and naturalist, Amos Bronson Alcott (1799-1888), educator, and Nathaniel Hawthorne (1804-1864, The Scarlet Letter, House of 7 Gables), novelist. Together, they fanned the ideals of individual liberty and equality, heavily influencing the abolitionist sentiment in the North. They also greatly influenced Amos’ daughter Louisa May (1832-1888, Little Women) towards becoming a great author herself. 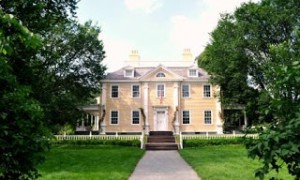 In Cambridge, we visited Harvard University, an Ivy League school established in 1636. It was named after its first benefactor, John Harvard, who gave the school his entire collection of 400 books. Henry Wadsworth Longfellow (1807-1882) served as a professor there until he retired into fulltime writing, making Paul Revere an icon with his poem, ‘Paul Revere’s Ride’. He was privileged to live in the House that Washington used as headquarters during the initial stages of the war.

This house is right beside the campus of Radcliffe, formerly a renowned university for women and now part of Harvard. I wanted to see the campus, just like Bill wanted to see Yale, because I was offered an undergraduate scholarship there, after completing with honors my HS scholarship from American School in the Philippines. However, my mother could not raise enough funds for living expenses and felt it was just too far away. I went on to a scholarship in the University of the Philippines instead. 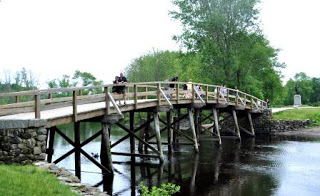 In Salem, we were surprised to see not just museums, statues, and memorials of the Salem Witch Trials of 1692. Nathaniel Hawthorne was born in Salem. His birth home was relocated to a spot near the only living colonial home in North America, the House of Seven Gables, his inspiration for the classic novel of the same name. It is now listed under the National Register of Historic Places.

Our visit with the Millers turned out to be much more than a visit with friends. Concord will now be forever etched in my mind. The outcomes of its two revolutions now give Bill and me the freedom to roam around the vastness of this land and to enjoy full equality in our partnership. It also gave me the inspiration to try to be part of an ever present literary revolution. Hopefully, what I write will be enough payback for the good education I was given, the opportunity to rise out of poverty, and be an American!

About the Author: After stints as CEO of Philippine pioneers in information technology, Carol migrated to the US to take care of grandkids, become a business counselor in SCORE, and serve as adjunct professor in three schools of higher learning in Seattle. She and BIll are on a 4-year cruise of North America in an RV. Read her blog.

Best Cellphone for You and ME? LG V30
Creating Wonder-Inspired by Nature
#MeToo: No More To Violence and Degradation
The perfect travel phone: How to choose one you'll love!