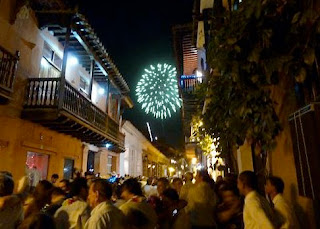 My wife Lisa and I had already had already spent a few days in Cartagena and a couple of weeks in Colombia, all the while awaiting New Year’s Eve. Since we’d had a very disappointing New Years celebration a few years back in Old San Juan, Puerto Rico, we were ready for a true party but were skeptical. Old San Juan is lovely as is the setting but if you have visions of Ricky Martin and thousands of others filling the streets to dance the night away, let it be known that New Year’s parties either occur in the high- rise hotels (with a stiff admission price) or the Puertoriquenos simply stay home to dine with their families. We heard rumors that gunshots and/or aspects of their culture led to a dull scene.

For whatever the reason, the city was dead. I mean, we had an 8:00 p.m. dinner reservation at a moderately posh restaurant. We showed up a few minutes late and the staff looked at their watches like, “Okay buddy, we’ll try and squeeze you in before we close.” After a quick albeit tasty dinner, we hit the streets seeking a happening location. Hours later we were disappointed and somewhat shocked that we could not find one. Even the salsa clubs that are normally a good time were bolted shut.
Hence our skepticism as we tried to determine what would transpire in “old town” Cartagena. We queried many people to find out how things might pan out and we received as many answers as the questions we asked — all varied, lacking enough consistency to draw a firm conclusion. What ever would happen would eventually transpire but we had no method to figure it out.

Four of us, including a Belgium couple, Yves and Mika, headed into Cartagena after spending an entire day hiking and swimming in the gorgeous Parque Nacional Tayrona. We finally arrived at Hotel Santa Cruz in central Cartagena around 2:30 a.m. the night before New Year’s, planning to sleep in and take it easy the next day as we approached the Eve.

Find more photos like this on EveryJew.com
We began the festivities by having dinner at a nondescript Indian restaurant in the Getsanami area, a soon-to-be-trendy location between the old town and Castillo de San Felipe. Our meal was authentic and tasty. After dinner we hopped into a taxi and headed toward El Laguito to the Cristobol Colon edifício, a location where couch surfers—a volunteer-based worldwide network connecting travelers with members of local communities, who offer free accommodation and/or advice–would meet prior to heading out for the night.

At first I thought we were out of luck. We entered the building, walked toward the rear swimming pool deck and found absolutely no one. We reentered the building and the concierge took one look and stated that we should take the elevator to the 11th floor.

There we found about 60 people crowded into a large one-bedroom apartment drinking and socializing. All were friendly. We immediately were taken in by these strangers, these couch surfers, who were from a variety of countries including Colombia. I was surprised to learn that roughly one-tenth of these couch surfers were from the United States. After all, Colombia still has the tarnished reputation as a chaotic country ruled by drug lords running amok, with personal safety ensured only by luck or a high kidnapping insurance premium. Nothing could be further from the truth; Colombians are a proud, friendly people and several joined this international crowd of Americans, Canadians, Italians, Russians, Brazilians, Spanish, French, Chileans, Argentineans, and Germans. There was also a Bolivian couple, the woman was very pregnant and said, “We are parents who party!” while drinking sprite! Everyone was multinational; the Bolivian couple was working in Colombia for a German company, the Italian woman lived in Brussels and was on a long-term adventure in South America.
After socializing we were all told to pay $27 per person for the night’s entertainment and to then head downstairs where La Chiva, an open-air bus with long padded benches, would be this special New Year’s Eve transport.

Toward the rear of the bus, a four-piece band played local salsa music, blaring out favorites written by musicians such as Joe Arroyo. We all festively boarded and within minutes made our first stop of the night, the all-important stop to get rum, coke, ice and buckets. Every row of seats on La Chiva had at least one bottle of rum.

As we drove around the city, our emcee on the mic kept us all active. He would yell in a request, “Who is from Brazil?” After the Brazilians cheered he went on like this, country by country, until everyone had a chance to respond. Then he asked, “All the men in the first bench, stand up and shake your asses like this,” as he swiveled his hips in demonstration. He went on row-by-row and requested – to the approbation of the crowd – that the women do the same thing. He also pointed out sights of interest as we passed through the city.

The band was also active, adding to the amazing atmosphere. After some drinking we stopped outside the Castillo de San Felipe for drinks and dancing. The night was warm and the fortress was very prettily bathed in lights. Lisa and I danced; her blue eyes alight, her long brown hair hanging to her waist. We swayed to the rhythm of the band; performing salsa moves we had learned back in Los Angeles for our wedding.

We once again boarded La Chiva and went to a salsa dance club that was ironically named “Long Beach” (Having traveled to another continent it was funny to go to a club named after a city close to home). The club permitted us to bring in our drinks and we danced while strobes and dotted flashes of light fluttered through the crowd. After a while, about half of the couch surfers wanted to leave. The others remained at the club, at least for a while, but Lisa and I chose to depart and walk toward the old town. I had heard that it would be crowded but I could not believe the masses of people that were everywhere. And I mean everywhere.

Three elevated bandstands with live bands pumped out fine salsa while patrons enjoyed great outdoor dining and drinking. People occupied every free space and in certain sections we experienced difficultly in navigating the crowd. Winding through the throngs felt like a rebirth, akin to entering the world on a completely different level. Lisa and I loved the grand party atmosphere but Mika was nearly in tears. She had left the previous dance bar without Yves and had lost him.

Another fun American of Indian descent, Kirthi, had also misplaced his friends and popped a bottle of champagne for us to enjoy as the countdown to the New Year began. We also drank mojitos, poured by vendors who lined the crowded streets, while we watched fuegos artificiales shoot and explode over the beautiful colonial architecture of the old town. Ten, nine, eight, seven, six….A great new year was about to commence, if our opening celebration was any indication.

We roamed and meandered around the cobble-stoned streets with our couchsurfing friends for over an hour. Eventually Kirthi found his group of friends and the next day we discovered that Yves and Mika each returned to their hotel independently where they found each other. As for us, Lisa and I completed the evening by consuming excellent mojitos and danced at Café Bazurto, a small bar-club located just outside the city walls. Cartagena was simply stunning. We completed our stay the next day with Mika and Yves. After having lunch at Luna Nueva in Getsemani , we wandered to El Laguito Beach Club to relax, watch windsurfers and view a wonderful sunset. Since our return to the United States, Lisa has already asked, “When are we heading back to Cartagena? Then she stated, “I could live there!” and maybe we will.

One response to “Amazing New Year’s Eve in Cartagena (Slideshow)”