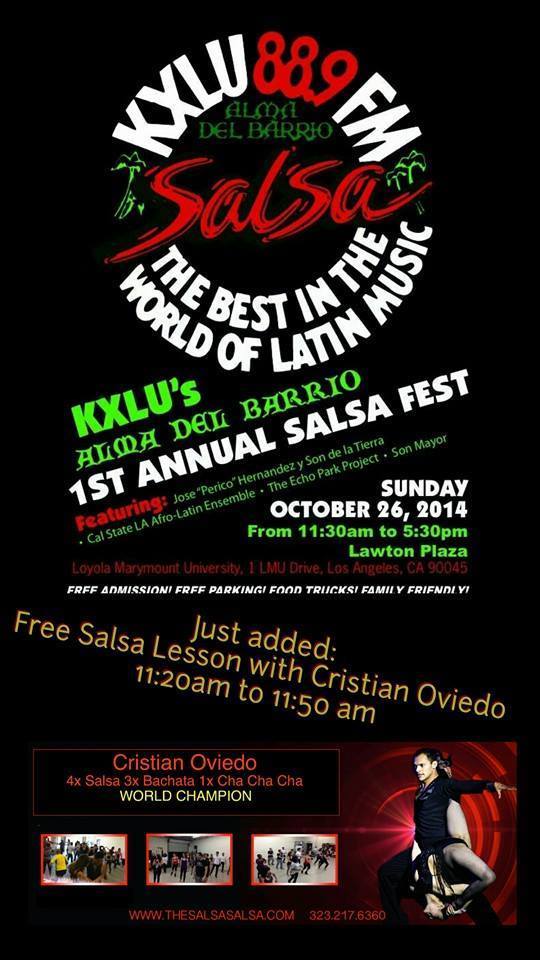 Life is better when you dance, so come dance

You will find an amazing dance floor and delicious food vendors.

FREE parking at the parking structure.

“Alma Del Barrio has been on the Los Angeles airwaves since the fall of 1973, when it was started by Enrique “Kiki” Soto and Raul Villa, then students at the Weschester campus of Loyola Marymount University. KXLU 88.9 Los Angeles is a LMU radio station licensed by the Federal Communiations Commission (FCC) to be a non-commercial, educational station. It has been assigned a radiating power of 3000 watts, which means its reach is limited, but for those living on the west side or surrounding areas, it is truly a great treat and something you should NOT be missing out on!

Alma Del Barrio is a radio program that aims to educate its listening audience on the type of music that it is listening to, its roots, its artists, its history and its cultural importance. Guests on the show also discuss ranging topics within the Latino culture, such as Latino film, Latino poetry, Latino painting, etc. The show is transmitted in English and Spanish, simultaneously, and listeners can also call in to make requests.

Tune in and listen to Alma Del Barrio! Make it a part of who you are every weekend. ¡Que siga la Rumba!” From Salsa Hook