The humpback whale shot into the air a few feet off the side of the boat, so close I could see the barnacles on his nose, drops of water roll off his skin, and the hint of a smile on his face.

The breaching whale marked the end of our recent ten-day visit to Alaska, a trip that began with three grizzly sightings, plus caribou and moose, in Denali NP. 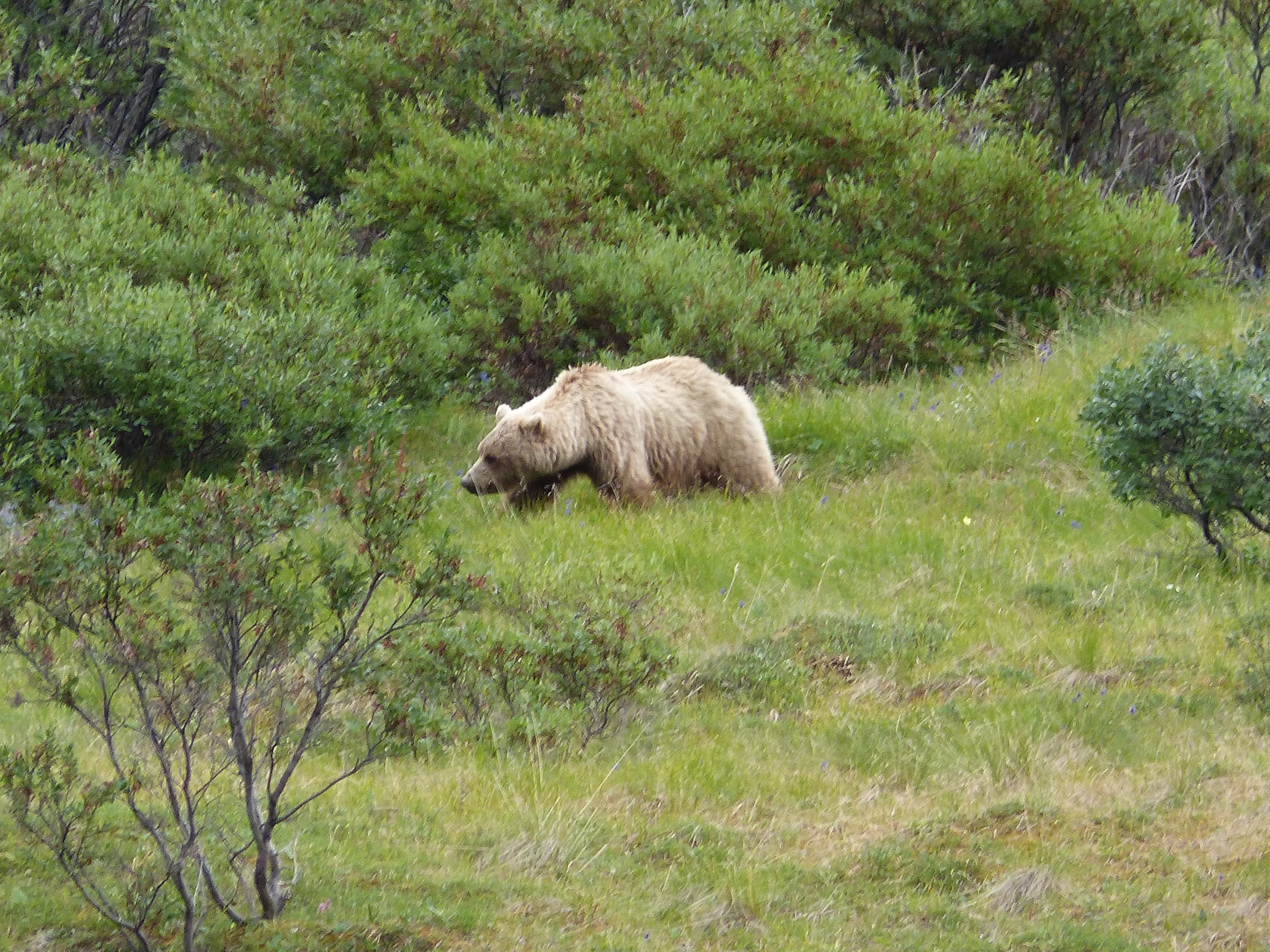 All of the wildlife sightings in Denali were from the relative comfort and absolute safety of a shuttle bus, the only way to get deep into the park. We could have gotten off the bus at almost any point and hiked, but we didn’t have a lot of time to spare and most important, we didn’t have bear spray — or “people seasoning,” as it is known in some quarters. If you don’t get it directly into their eyes and spray it by mistake on your clothes, it makes you even tastier to hungry bears.

After Denali we headed south to Homer to catch a water taxi across Katchemak Bay to Tutka Bay Lodge, our hosts for the next segment of our trip. This all-inclusive, luxury, wilderness retreat is the kind of place that even if it had rained the entire three days we were there, it wouldn’t have mattered. The setting had a lot to do with it – mountain ridges across the bay and old growth forest just a few feet away. But Tutka Bay Lodge offers a lot more – tastefully decorated cottages with views of the bay, a huge deck large enough to land a helicopter (actually three, for visiting dignitaries with large security details), a spa and sauna, an unpretentious but attractive main lodge, and a world famous cooking school.

Speaking of food, as I often do, the meals were extraordinary, featuring such dishes as spot prawn tacos made with fresh tortillas, butternut soup with ginger oil, salmon with melted leeks and caramelized fennel and spinach, miso cod with bok choy, pumpkin seeds and sea lettuce. Every afternoon there were fresh baked cookies served warm, moist and gooey straight from the oven.

We went kayaking every morning with our own private guide. During our paddles we saw lots of bald eagles and sea otters, several seals and dolphins, and a lone black bear on a rocky beach, all embedded in a dramatic landscape of wide open water, narrow inlets, tree-covered islands and snow-capped ridges. 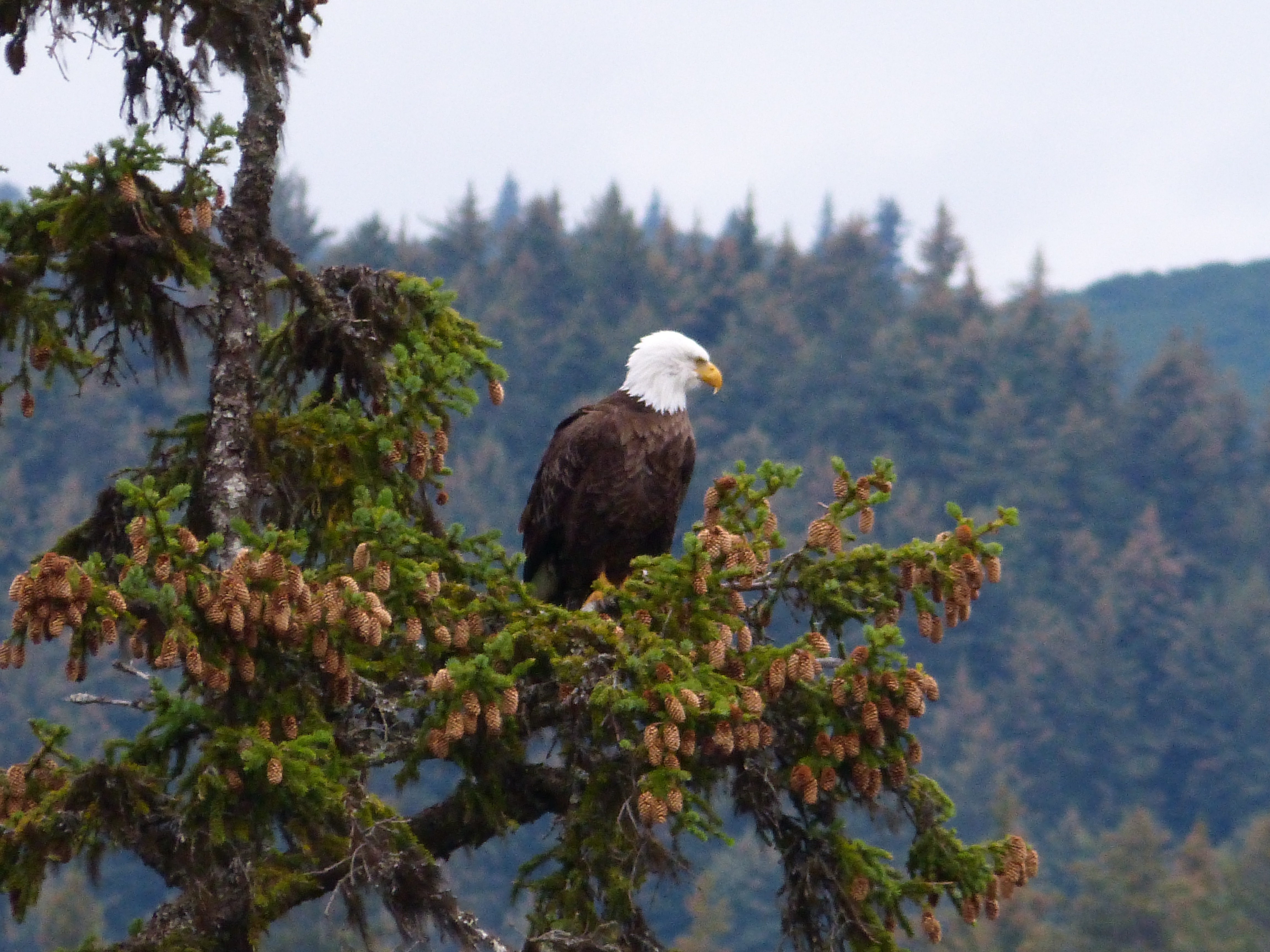 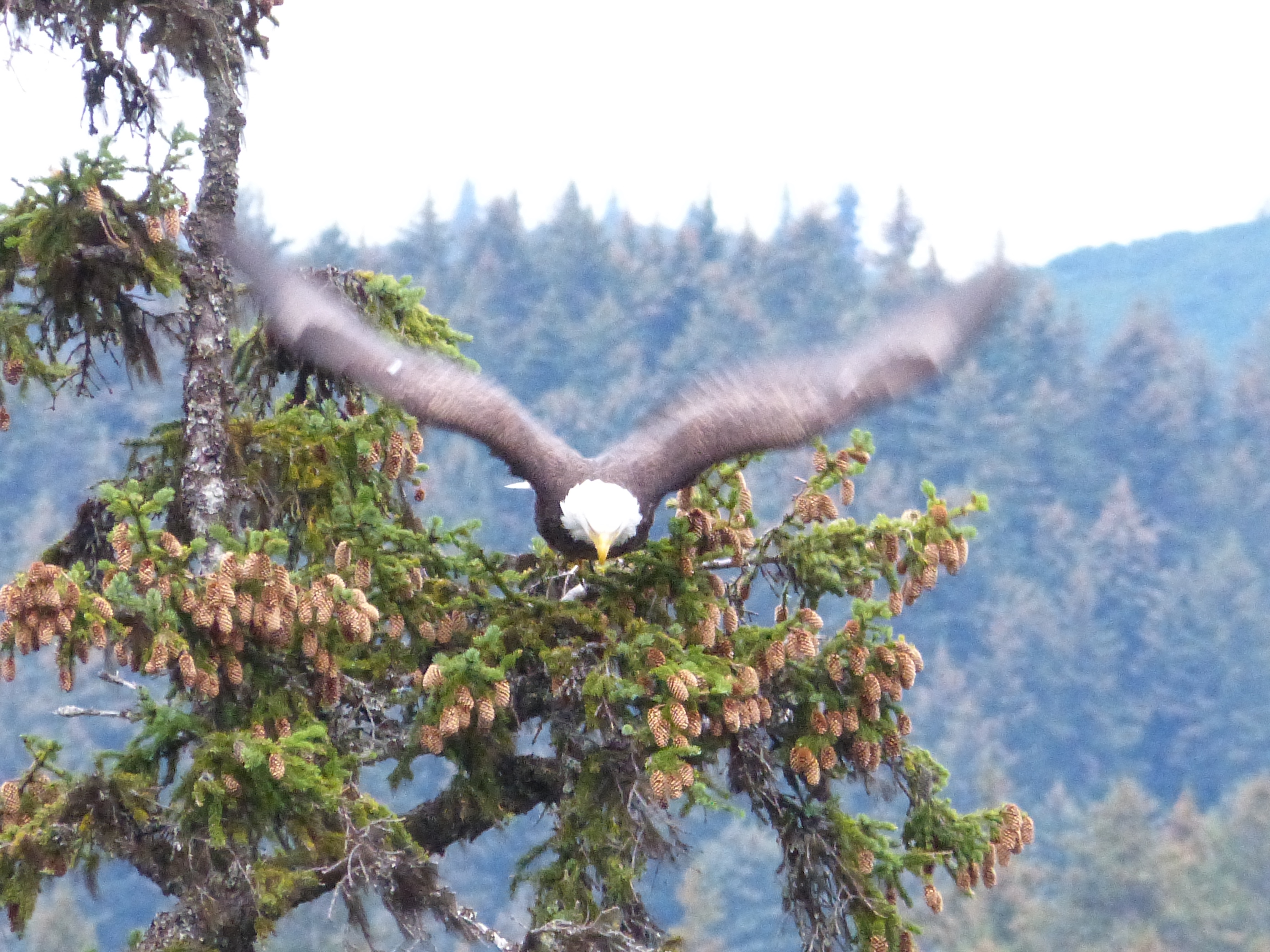 Our afternoons were spent hiking through the rain forest surrounding the lodge, getting a massage, watching a cooking demonstration, sitting in the spa, or just lounging around.

In the evenings we either took a boat ride to look at otters, socialized with the other guests, or went back to our cottage to read before falling asleep, earlier than I would have back home. We could have also gone bear watching or deep-sea fishing at extra cost, but I felt like we had enough to do and took advantage of whatever downtime we had to just relax.

We would have been happy to spend more than three days there, but we had glaciers and whales to see. It’s a three-hour drive from Homer to Seward, the historic jumping off point for prospectors and explorers in the early 1900s and the beginning of the Iditarod Trail. The main reason for our visit was to take a boat tour of Kenai Fjords National Park and kayak in front of Aialik Glacier.

Our first morning in Seward started out sunny and bright, but it soon turned grey and moody, perfect weather for paddling. Our guide from Kayak Adventures Worldwide led us to the face of the glacier where we sat in our kayaks, well-bundled against the cold, gazing at the wall of ice almost 600 feet high about a half mile away. 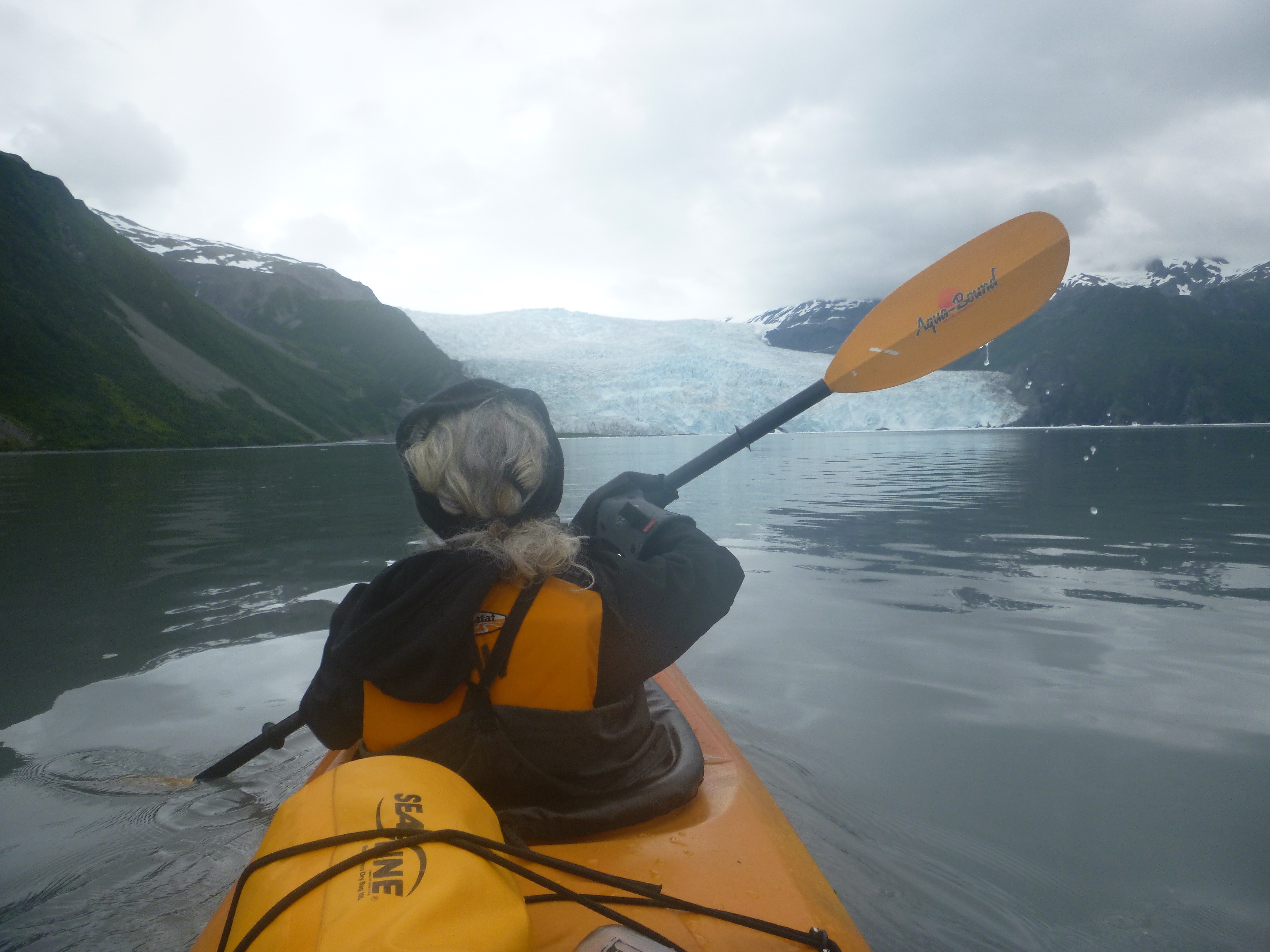 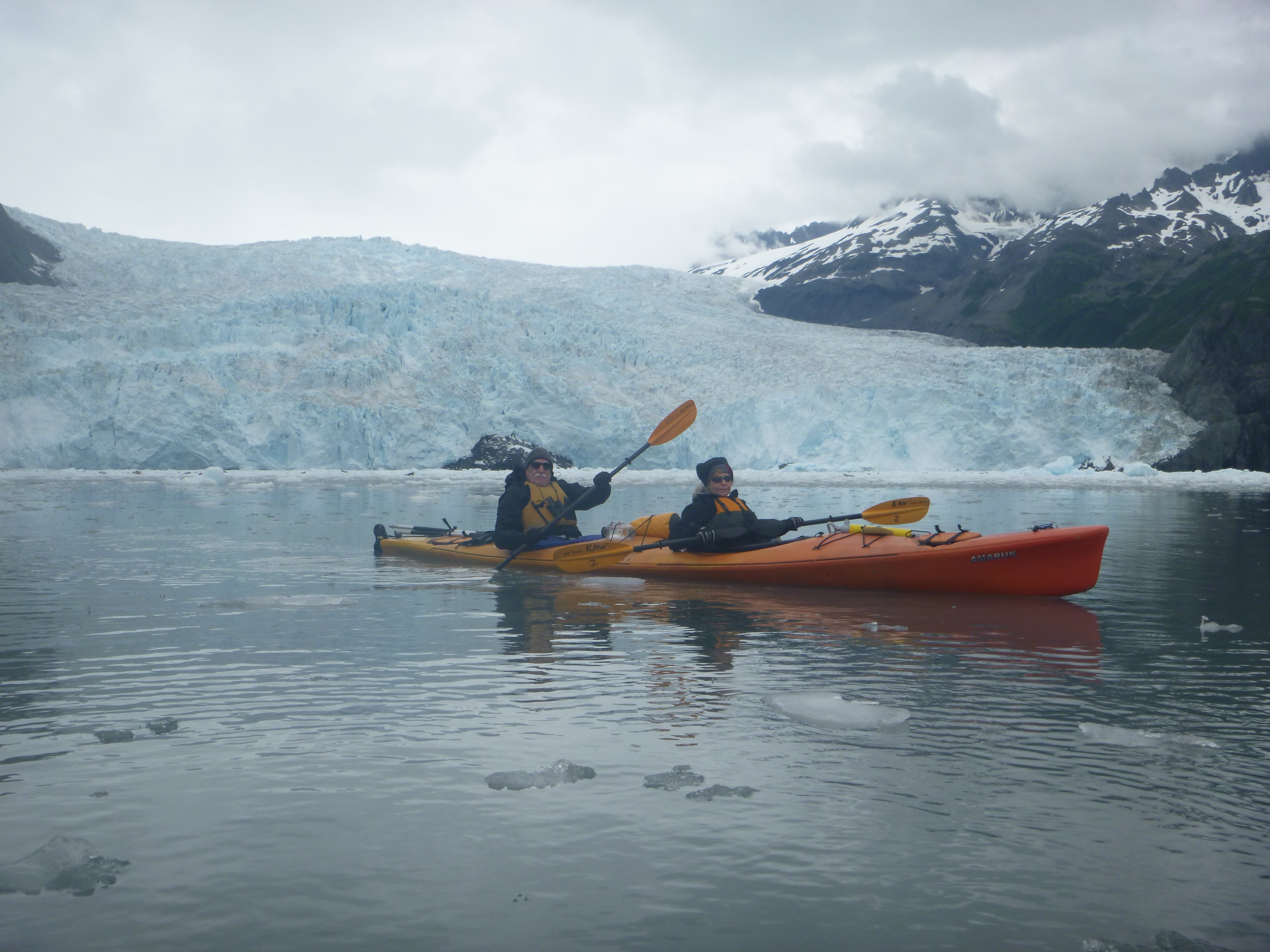 We drifted among icebergs as huge chunks of ice thundered off the glacier every few minutes and into the water. Except for the sounds of falling ice, drops of water trickling off our paddles and tiny wavelets lapping at the sides of our kayak, we heard little else.

We stared at the glacier for almost an hour, then paddled back to the pick-up point for our water taxi back to Seward. About an hour into our ride the whale show started.

At first, he was some distance off. 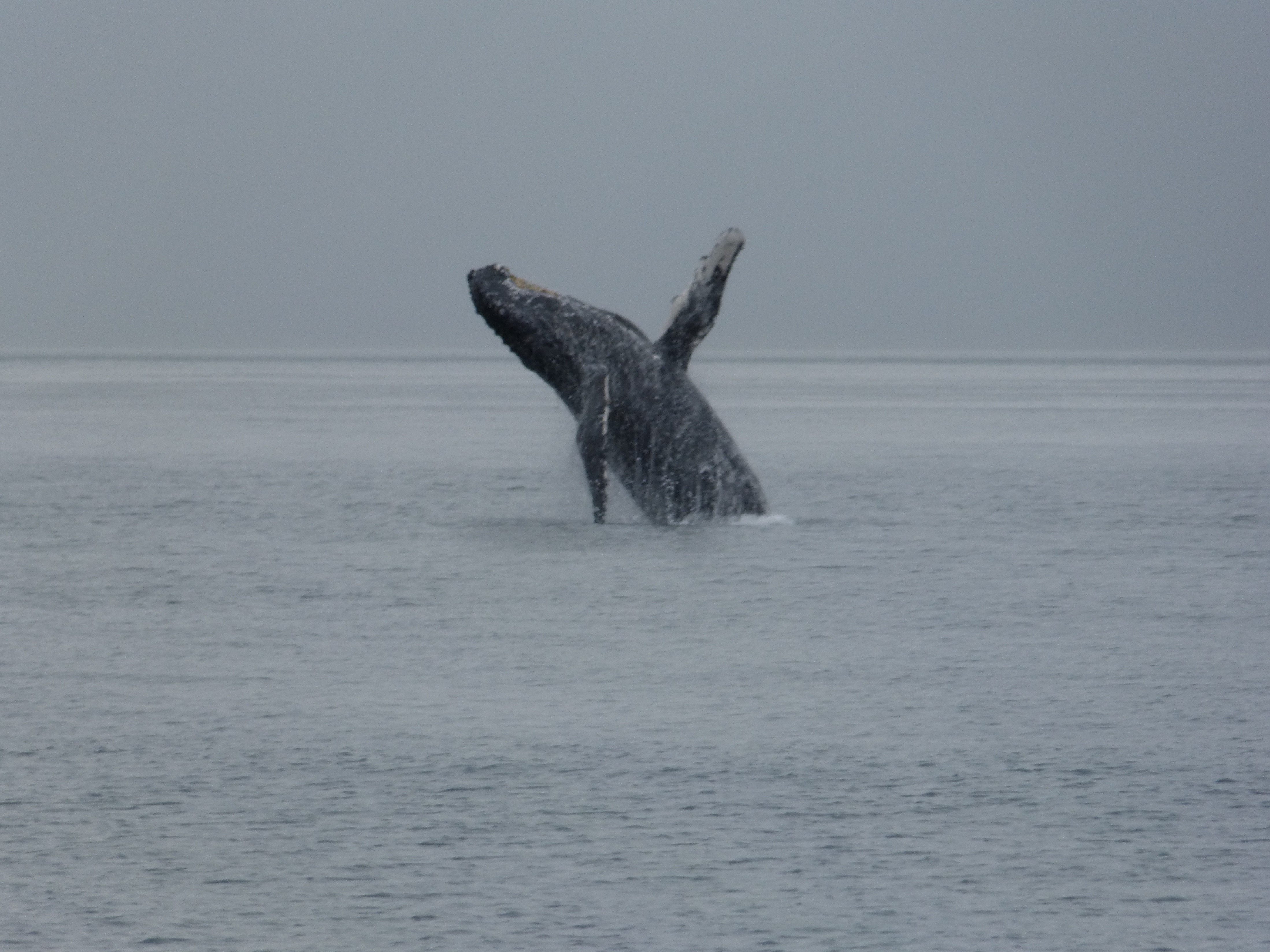 I missed the first breach, but caught the second plus the 30 or so that followed over the next 45 minutes. For the final fifteen minutes of the show, he came closer and closer to our boat, finally climaxing in his heart-pounding, barnacle-encrusted leap just a few feet away. 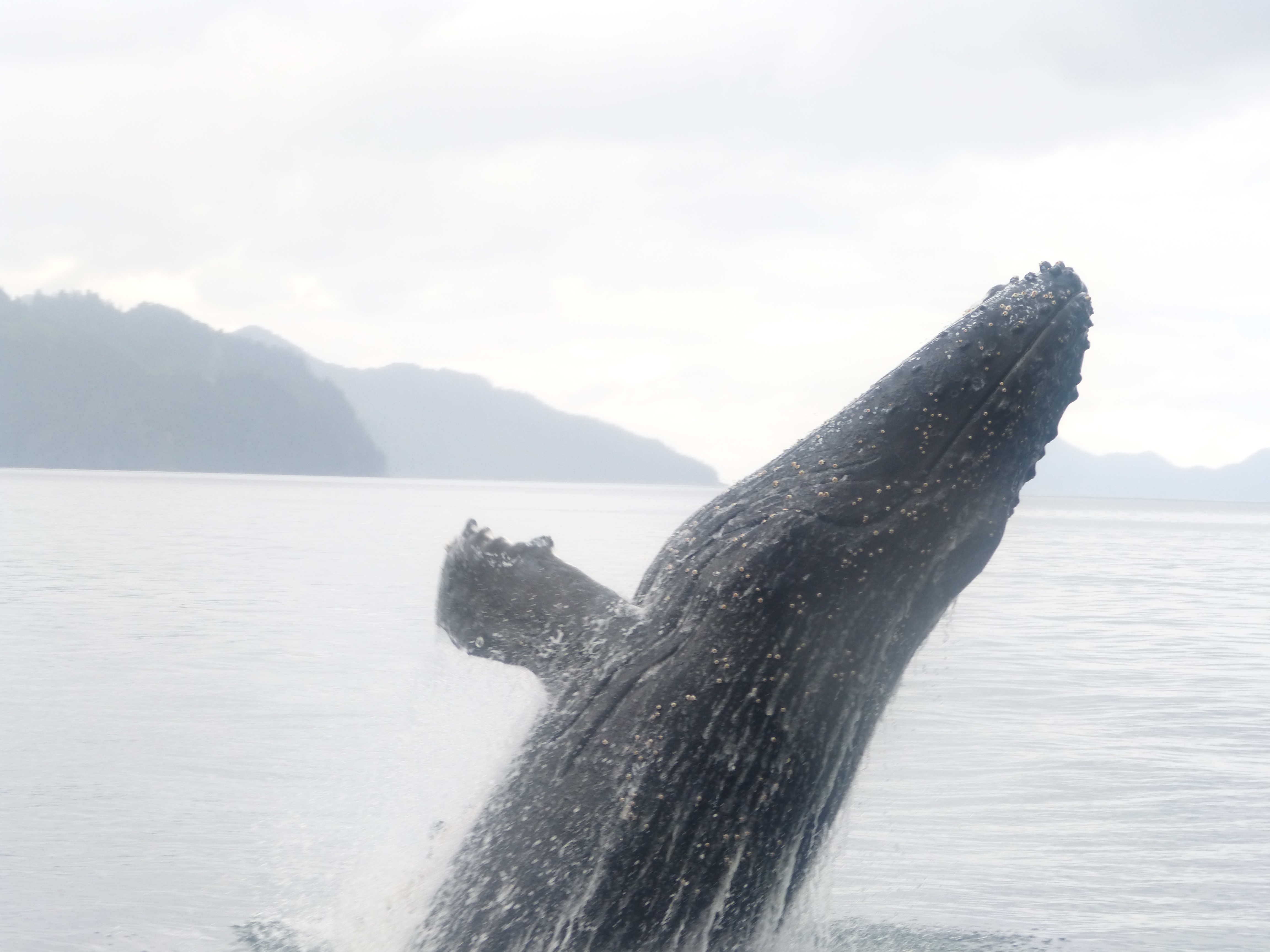 I’ve seen whales up close before but never one as active, athletic and photogenic.

The next day we sat in a movie theater in Anchorage killing time before our 1:30 a.m. flight to Seattle, watching the dinosaurs of Jurassic World rampage across the screen. The dinos looked realistic and were fun to watch, but I much prefer the real thing – bears, eagles, sea otters, but most of all, a smiling whale shooting into the air, pausing just long enough for a once-in-lifetime photo before crashing into the water on his back.

Can a Great Travel Idea Get You Out of the Doghouse?
Dump Life in Cambodia
Budget Adventures 101
Talking Travel On The Good Life With Mike Wreyford