Aitutaki–a jewel in the South Pacific 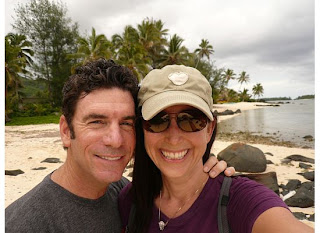 My first trip to Aitutaki was for our honeymoon two years ago. George and I had wanted to visit there before but it was the first time the dice of price allowed it to happen! Our two weeks in the Cook Islands included kayaking, hammock swinging and two trips to the incredible jewel- toned Aitutaki Lagoon with Teking Tours.

Kit Herring of the Backpacker’s Handbook was recently there for a glorious third time and offered to share his historical knowledge of this spectacular location. Enjoy!

A Concise History of First Contact inAitutaki and the South Pacific

When Captain William Bligh let go the anchor of the Bounty off thewest coast of Aitutaki a few days before the famous mutiny, he beheld an islandand a culture far different than we can possibly understand today.  He didnot visit the whole island, but rather only the area loosely termedArutanga.  Always a meticulous diarist, he recorded some interestingfacts.  Of the natives in Tahiti he had written, “Inclination seemsto be the only binding law, marriage in this country for a woman will get her ahusband if she pledges…”

He continues about the inhabitants of Aitutaki, “The people are justthe same as those of the…Isles…  but are more docile and inoffensive.”
The account from his logbook of the discovery reads as follows:
“At daylight however we discovered an island of a moderate height witha round conical hill…A number of small Keys were seen from the mast.”

“They were all around with trees and the large island had a mostfruitful appearance.  The shore was bordered with flat land, withinnumerable Cocoa Nut and other trees.  I saw no smoke or any sign ofinhabitants.”

He writes that, “(T)hey called this island Whytootackee, ” andthat upon his first meeting with the natives, “I was however agreeablysurprised by a visit from four men in a single canoe… Two of the men had eacha large Mother of Pearl shell hung on their breasts… On being told I was theErree (chief), the principal person immediately came and joined noses with meand presented me his shell and tyed it around my neck… Notwithstanding theysaid there were no Hogs, Yarros, of tarrow… they called them by name, and Irather inclined to believe they were imposing upon me… The Chief of the canoetook possession of everything I had given… a knife, some nails, Beads and alooking glass.”

He goes on to say that two locals wished to overnight on his ship. Apparently some of his crew took the idea of immediate friendship in a ratherliberal sense.  “After the natives were gone I heard that some of myjohns had engaged to bring women off in the morning, and it was therefore thereason perhaps that two of them designed to sleep on board.”

We have no reason to disbelieve his observations.  Any navigator whosailed in an open boat, as Bligh did after the mutiny, over several thousandsof miles of the unexplored open Pacific to safety at the nearest Europeansettlement, Batavia, now the capital city of Jakarta in Indonesia,deserves respect and validation. Regardless of the circumstances that resultedin his being tossed from the Bounty with scant provisions by a crewthat had become enchanted with the terrible beauty of Polynesia, he was a manwho set forth to record all he saw.

But life on this tranquil outpost of Oceanic civilization received the firstof its death blows at his hands, although Bligh could not have understood thetragedy about to unfold when he touched shore. The story of the coming of themissionaries in 1821 is well known and does not need to be repeated here. The tales of forced conversion, the bringing of diseases and epidemics that the”Christians” blamed on the Polynesian gods, the later blackbirding ofthe population and the relentless efforts of the Europeans to stamp out the oldways — these stories are horrific and yet accepted today as a matter of course.

With their bodies’ physical beauty covered by the whites in heavynineteenth-century civilized clothing, the essence of the pre-contact nativeswas smothered irrevocably.  Today no oral traditions remain of that firstcontact, and the missionaries did nearly a complete job of eliminating the oldspirituality and the old ways.

The author Jared Diamond has noted that perhaps the biggest mistakehumankind ever made was to quit the hunter/gatherer way of life and settle intotowns and cities, where manipulative leaders were then able to force stiflingsocietal rules and repression on hapless clans of formerly free people.

Whether or not this generalization holds much truth is still a matter ofdebate, but in Aitutaki the answer is painfully obvious.

Perhaps the wisest response we have to First Contact comes from the log ofJames Cook. Upon encountering the indigenous inhabitants of Australia for thefirst time, he recounted that they shouted at the English sailors anincomprehensible phrase. At the time no one in the explorers’ party understoodthe meaning of the words.  Later theywere found to impart a simple message: “Go away!”

Thanks for reading and for all your comments on our blog!
Tell us: Where do you want to go next?


More from Lisa and George Rajna at: http://www.wesaidgotravel.com/

Videos: #LBBC We Can Survive Concert 2014
Hollywood: Your Home Away from Home Part 1
Dancing to Freedom!
Gold SATW for Ken Budd