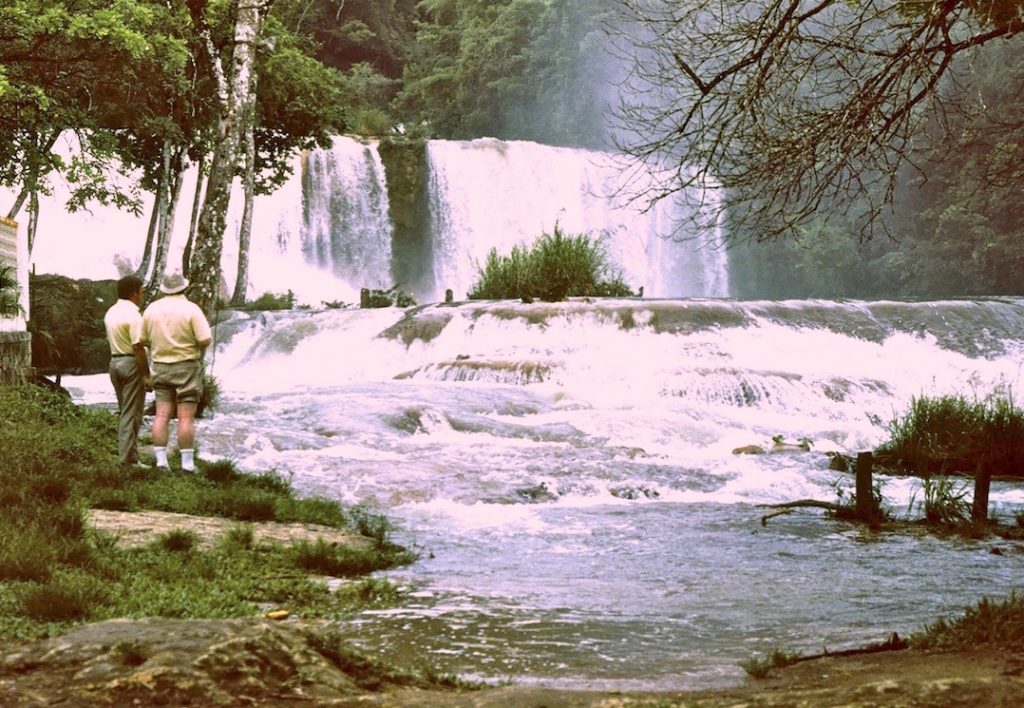 Our Mexican adventure (or adventures) began with a phone call from a mid-west advertising agency. It was their producer – a guy who I’d known from previous jobs. He said they were bidding a package of spots for their client, Kool Cigarettes to run in Mexico and probably the rest of Latin America. (read Part 1 & Part 2 The Grua of the adventure here)

But instead of sending me a set of storyboards to bid on – which is the normal procedure – he said he was sending me a picture of a waterfall. Or more accurately, his art director’s rendering of a waterfall. His challenge was, “If you can find a real waterfall that matches this one, the job is yours…and we’ll work out the costs later!”

“We don’t care where it is, Hawaii, Mexico, South America; as long as you find one that matches!”, he added.

Now that was a challenge!

After a lot of research in Hawaii, South America and other parts of the world, we finally found the perfect match…in Mexico, near Palenque, and the Guatemalan boarder, in a place called Agua Azul.

The match was uncanny. As if the art director had seen it in his dreams, or in a travelogue a long time ago.

When I showed her the art director’s rendering, she knew immediately where to find a match. She even had pictures, which I relayed to the agency producer. It didn’t take long for his reply. His art director was ecstatic and the job was ours.

At that point I called in Mary Dean for a meeting to discuss budgets, the location, and her role in the project. Then she shocked me when she described how difficult it is to shoot in Agua Azul. What she outlined was potential disaster at every turn because the roads get washed out regularly since they are constantly at the mercy of the weather.

She made no bones about the risk factor. If we were lucky enough to get in when we wanted to, we must (and she emphasized MUST) be prepared to remain there until the road out could be repaired. If the road gets washed out – which she practically guaranteed it would – then it might not be just overnight, but a matter of days trapped as victims of Mother Nature .

That was a pretty dire warning, but she said she would make sure that we would have a sufficient supply of tents, food and support so we’d at least we’d be out of the weather.

As we began the production in Mexico, we lived with a certain level of dread all during the Puebla Dry Lake portion of our journey – anticipating the worst when it came time to move onto Palenque and the waterfalls at Agua Azul.

All went well with our shoot on the Dry Lake (see Part 2-”The Grua”). Afterwards we had a long bus ride back to Mexico City to regroup. Then we flew out the next day to Villahermosa, and took another bus ride to Palenque.

We stayed over night at the lovely Hotel Nututun on the Rio Chacamax. That night we were treated to a fascinating lecture on the archaeological and historical facets of Palenque.

The next day was dedicated to scouting locations at the waterfall. A location scout is primarily reconnaissance mission for the benefit of the director, the DP (director of photography) and the key production staff to determine where they want to place the actors, the cameras, resolve what backgrounds they want to feature, sort out logistical problems, and above all to get the ad agency creatives and the client representing Kools on board with the choices.

Mary Dean organized our scouting group, since she was the only one familiar with the location. Maintaining her extreme caution, she chose to have us enter Agua Azul from the backside by flying in, instead of driving in the front way. A trip that would take us over some fairly remote and rugged mountains.

Our small scouting group was bussed out to the “scenic” Palenque Airport, which looked like something out of a WWII movie staged on a remote island in the South Pacific. It included a crashed twin engine Beechcraft parked by the side of the runway

Our planes hadn’t arrived yet when we got to “Palenque International” So, we took a quick tour. When they did arrive, we broke into two parties, and boarded what turned out to be two rusty little four passenger Cessnas.

Once we were onboard, our pilot got in. That’s when I noticed a small statue of the Virgin of Guadalupe wired to the dash. That gave me a bit of a pause. But then he looked at the statue, crossed himself and finally sat down in his seat.

Our takeoff was uneventful as we began our flight over miles of rugged, mountainous terrain. Then we got another jolt…..seeing where we’d be landing. It was in a cow pasture filled with cows. But before we could land we had to make a low pass over the cows, just to get them to clear the RUNWAY. A term I use loosely because it consisted of nothing more than a long worn bare strip in the middle of a green field.

Once safely on the ground, we were trucked into the waterfall in order to avoid risking the front entrance which Mary Dean said was probably out of commission due to the recent heavy rains.

The following day was the BIG event. Finally we were actually going to shoot the commercial, assuming we could get in.

But it was certainly going to test our ability to bring our entire crew into Agua Azul, including equipment, actors and animals. I assumed we’d be going in with a bunch of small four- wheel drive vehicles. So I questioned the two large tour busses that were waiting for us outside the hotel.

Why on earth would we be relying on such large vehicles on such treacherous roads? But whatever our conveyance, we were praying that we’d all get in, and still be able to get all of us out when we were done.

When we left the Nututun hotel, we travelled along a major highway. I kept looking for the point where we would be entering the primitive and barely accessible terrain that Mary Dean had all but guaranteed us.

But we never did. And suddenly I realized that all of our fears were for naught!!! Aqua Azul is a National Park, and its entrance was simply a continuation of our beautiful two lane, fully paved highway. Our worst problem getting in was having to remove a fallen tree that briefly blocked our busses. Everything else was a piece of cake.

Why Mary Dean, ever the “Crape Hanger”, created this myth in the first place is something we’ll never know.

For over 40 years Pete has been producing TV commercials, documentaries and films for clients all over the world: Primarily as Executive Producer for TV commercial production companies, including his own. Among his credits, he produced the award winning, theatrical short, Blaze Glory, which had a long run on the “Glenn Campbell Show," and American Airlines In-Flight Movies. Later, with his own production company, he expanded his activities into computer gaming, producing the live action backbone for Star Trek/Star Fleet Academy, starring William Shatner, George Takei and Walter Koenig in their original roles of Captain Kirk, Sulu and Chekov. Since then he's produced a series of documentaries for the “Motor Press Guild” in addition to his personal documentary, For the Life of Me. He's a member of the Directors Guild of America, the Television Academy of America, and the Motor Press Guild.PP