A Meditation on Paris 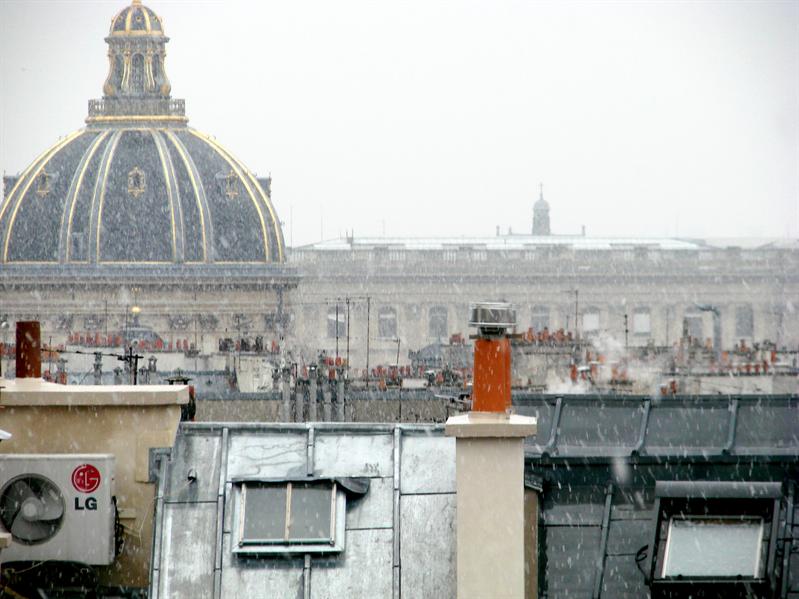 A Meditation on Paris

It’s nearly impossible to write about Paris while sitting in a Café on the Carrefour de L’Odeon, the oldest square in the city. I’ve lived here for nearly a year and everything still seems completely surreal, one big cliché, and there simply is no obvious place to begin.

One could write about the architecture of the city, uniform, windy cobbled streets, all the buildings limestone yellow, the grey tin roofs with bright terra-cotta chimneys, the windy iron balustrades overflowing with ivy.

One could write about the Seine, the snake winding and turning through the center of Paris, muddy and gross, yet still the draw of the city; criss-crossed by bridges made of everything from oak to stone. It’s illegal to even step in because of the filth, somehow the romance of the diner boats gliding by is not dimmed.

One could write about the gardens, with their meticulous (and almost ridiculous) lines of trees and flowers, where hundreds gather between 12 and 2 to eat lunch and disappear again back to the office just as quickly. As they eat, the smoke from their cigarettes wafts in small puffs up into cloudless sky. There are a few students who dare to bask in the sun on the strictly designated open grass areas. The fountains, some that trickle and some that roar, have the inevitable coating of pigeon poop.

One could write about the majestic monuments, the Eiffel tower, the Arc de Triomphe, their silent splendor drawing thousands upon thousands of camera—wielding tourists, or the towering cathedrals and peaceful churches with thousands of unique stories behind every stained-glass panel. The bells, ringing every day-not on the hour but in an indecipherable pattern of times.

There is also another side to her. It’s the Paris you seen when the sparkle wears off and the shadows of the real world settle in.
Paris is the homeless man who lives on the stoop next to my building, calling out ‘ma princesse’ every time I walk past him in the morning. She is the half eaten pieces of baguette lazily strewn around on the street outside of the bakery. At the flower shop on Rue des Fleurs, every morning someone spends at least three hours meticulously arranging and re-arranging the display, only to have it knocked down by a tourist on a bicycle. The flood in the streets caused by the street-cleaners opening the gutters to wash away the city filth- most of which is cigarette butts.

Paris is the taxi-driver, full weight pressed on the horn of his white painted 1992 Mercedes, opening the window to yell at a tourist J-walking across boulevard St. Germain, the plume of cigarette smoke spilling out of his window threatening to choke the school children walking by. He weaves his way around mopeds and garbage in the street in a rush to get home to his wife. Or to his mistress.

Paris is the woman dressed in nothing but rags and spiky heels, calling out to anyone outside the Bois de Boulogne at 3 AM on a Thursday morning. Their hands shake as they bring their cigarettes to their mouths, the red tip illuminating the smeared makeup and clumped hair sticking to their faces. The men drive by slowly, their gravely voices calling out and the women’s scratchy replies.

Paris is the swat team brought on to Europe’s most prestigious university campus to quell an uprising of students demanding better benefits while they struggle to become the leaders of this generation. The chanting, the kicking, the screaming and flailing. The inevitable shutting-down of the public transit system for the next day or two because of a strike.

About the Author: Lisa Gabrielson is a recent college graduate with a passion for travel, writing, photography, and sailing. She has traveled all across the Caribbean, North America, and Europe, including an 11-month stint as an Au Pair in France. She is currently an Account Executive at a small marketing firm in the DC area, and travels back to her hometown of Boston regularly. You can follow her on Twitter or Tumblr,