What Will You Build With a Women’s Studies Degree?

Thank you Frankly Penn for publishing my article,

What can you do with a Women’s Studies Degree? 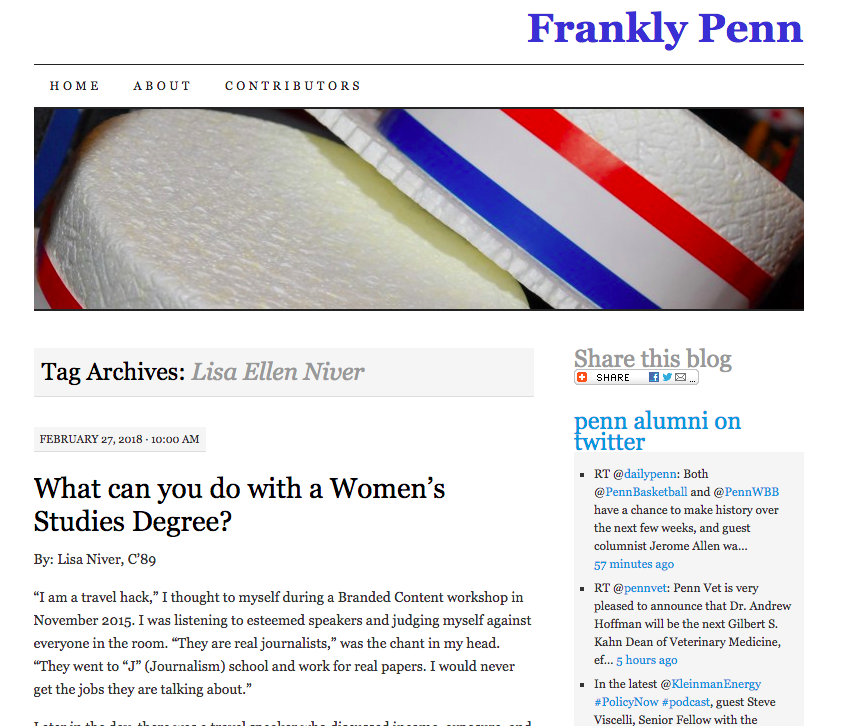 “I am a travel hack,” I thought to myself during a Branded Content workshop in November 2015. I was listening to esteemed speakers and judging myself against everyone in the room. “They are real journalists,” was the chant in my head. “They went to “J” (Journalism) school and work for real papers. I would never get the jobs they are talking about.”

Later in the day, there was a travel speaker who discussed income, exposure, and experiences. Sometimes he was paid $1 or $2 a word and sometimes he just wanted to take the trip. In 2016, I was invited on a two-week luxury trip to Italy. Maybe I could pick my self-esteem up off the floor. I was making progress on my website, We Said Go Travel, and had just been hired for my first Instagram take-over, something most people in the room were shocked to learn was an actual job.

During that same year, I attended six different conferences to learn about writing, social media, and destinations. I was willing to soak up any advice and take any suggestion. I worked with a media coach and made a sizzle reel. I focused on asking for help. I used my University of Pennsylvania network and dedicated full days to my work, starting early every day and working late into the night. An editor told me, “Just be undeniably good. Whatever you do, do your best and eventually, people will notice.”

This advice was echoed at the Penn Women’s LA Career Networking Event 2017, “Women in Entertainment.” The entertainment industry panel included Meredith Stiehm (C’90), Alison Hoffman, Veena Sud, Allison Schroeder and Jennifer Gwartz (C’90). Moderator Fielding Edlow’s (C’95) questions made for a phenomenal event and included how to approach a mentor, what would you tell your 22-year-old self, how to deal with sexism and how to get an agent.

This incredible award-winning panel included the screenwriter for Hidden Figures and the creator of Cold Case and Homeland. What did all of these women have to say? “Be kind to yourself. Don’t give up. Create a network. Add value. Know that you will get there.” I sat up in my chair and thought this is what I do. I am working hard every day. Maybe someday I will get to sit in a chair on a panel like this and say, “I actually did it.”

Jennifer Gwartz (C’90) told us: “There is no wrong path. There are no wrong jobs. No wrong experiences. Everything you do will enrich your storytelling. Have experiences, relationships and remember to be kind to yourself. Most of all, have fun.” I have not always believed in myself or that I would ever get anywhere, but I have kept going.

Listening to Allison Schroeder talk about a year where 44 pitches were rejected but then she went on to write Mean Girls 2 and Hidden Figures and be nominated for an Academy Award was inspiring. All of the women spoke about rejection, the need for a thick skin and perseverance.

The Penn motto, “Inveniemus viam aut faciemus—“We will find a way or we shall make one,” has been a mantra for me since my years at Penn. While I was a student, I co-founded a magazine and was active in student organizations. There were paths that seemed to be dead-ends but somehow I persisted. At Penn and after, I was often asked to defend my choice of a Women’s Studies Major. “What can you do with that?” was usually the question. My answer? “The goal of a liberal arts education is not to memorize facts but to find solutions to problems that do not yet exist. This interdisciplinary major is teaching me to think.” My coursework led me to USCF Medical school, but I chose to leave and teach science instead. After working for years in education and earning a Masters Degree, I spent seven years traveling the seven seas by ship as I worked for three cruises lines.

Traveling to nearly 100 countries, I have seen history come to life in the pyramids, Angkor Wat and Guadalcanal. In March 2017, I reached one million views on Roku, Amazon, and YouTube. In April 2017, I was named Adventure Correspondent on The Jet Set TV talk show. In May 2017, I was named a finalist in two categories for the Southern California Journalism Awards. I was invited to be a Facebook Live host for USA Today 10Best. In June 2017, I received an award from the Los Angeles Press Club, along with Andrea Mitchell (C’67), who received The Joseph M. Quinn Award for Lifetime Achievement. In November 2017 and February 2018, I had my first two travel segments on KTLA TV.

During the Penn networking event, Allison Hoffman from Starz told us, “Careers are not linear.” I know for certain my path has been circular and full of stops and round-a-bouts. I realized I had closed the door on medicine and teaching but had found a window into the wild west world of media. I am a travel journalist and an explorer.

I realized what you can do with a Women’s Studies Degree from Penn: anything you can dream!
———

READ THE ARTICLE ON FRANKLY PENN

#WomenHumanitarians 24 hours. 24 Stories.
Tell Me More About: Beaches Turks and Caicos
Watch me on TV! Thank you KTLA Los Angeles!
Working from anywhere in the world with OFX