What The Hell To Do In Death Valley?

When I told friends that my brother and I were heading off to Death Valley for a long weekend, the initial question posed to me was a simple, Why? and isn’t it too hot there?

The question should be,What isn’t there to do…

From West Los Angeles,  Michael and I departed at an early 6:15am on a 4 1/2 hour drive that initially weaved through the city and eventually led to increasingly more remote locals. We tried to check into the Furnace Creek Resort but our room was not ready until 4:00pm. We awaited our travel partners, my brothers friends from college, Dave and Marc. After meeting up, we all ate lunch at the 49er Cafe, a place with mediocre comfort food and friendly service. After lunch, we took off to visit Badwater, the lowest location in the western hemisphere…on land…282 feet below sea level.

Besides the notoriety of being the lowest place on earth, the accumulation of salt deposits literally leaves a blanket of salt across the landscape, sometimes appearing to look similar to snow. My brothers friends brought along a football and we went out for passes while we traversed the salt blanket. As we departed, we could see a placard high up on the mountain behind the Badwater that read, Sea Level.

Our next stop was the Natural Bridge, a formation that was created millions of years ago that does look somewhat like a bridge. The relaxing walk up between the mountainous walls surrounded us as we entered to see the bridge. My brother and Dave attempted to scale minor portions of the surrounding walls with little success.

We departed and took a brief pit-stop at the Devils Golf Course and drove via Artists Drive to see the Artists Palette, a low viewpoint with views of pastel colored mountains that appear to be painted a variety of colors including reds, golds, blacks, browns and greens, as if a painter whisked a color-varied brush across the landscape in an attempt to paint an intense mosaic. I walked around an area that has hiking opportunities to enter the actual picturesque scene.

During our first day we also stopped at Zabriski’s Point, an outlook with pretty views of the lower valley and known as the location of Antonionis 1970 movie. We also completed part of a hike down into the canyon but as dusk dawned upon us, we headed back to the viewpoint to take sunset pictures.

The main nightlife in the area had to be the Furnace Creek Bar, both a local and touristy hangout. Armed with a jukebox, food and alcohol, this is the most happening place in the region. Make no mistake that we are in the 21st Century as the bar is lined with LCD TVs playing sporting events from around the nation. The atmosphere was ho-hum, the food mediocre to poor.

The following morning, after getting ready for a busy day, we powered up with a breakfast that in my case included two massive pancakes, scrambled eggs, and sausage. We left to hire a jeep for the day, loaded our cooler with a 12-pack and some snacks, and headed out to the first major attraction of our stellar day, the literally half-mile wide Ubehebe Volcanic Crater. My brother and I had climbed down into this crater a few years ago and almost lost our lives when we idiotically decided to climb the lip of the crater rather than using the steep yet safe trail. 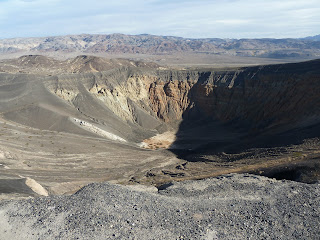 This time I opted to visit the smaller crater on the back side called Little Hebe rather than going down into the main crater with the group. The small crater looked more like a meteorite indentation than a crater but the surrounding area was attractive, yet barren. Still, the main crater is the attraction here, a stunningly huge caldera in the middle of nowhere.

When then left off-road for 25 miles to a special place called the Racetrack Valley. Contrary to the name, no races are held here. Instead, what you get is a massive oval two-and-a-half-mile flat river bed that has rocks and boulders that fall from the surrounding mountain and leave unexplainable trails of their movement across the flat landscape. The theory that sounds most logical to me is that when it rains, and strong winds hit the flat lands, the rocks slide slowly across the flat plain, leaving a mud trail in its wake, its remains imprinted when the sun dries out the river bed. We played soccer and wandered around this fascinating landscape, a place like no other on Earth that Ive seen. 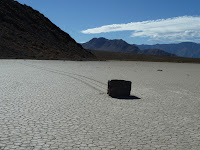 Our last stop of the day was about an hour drive through the mountains to the Eureka Dunes, the highest in California. We clambered up the first major dune only to get a glimpse of many dunes rising higher and higher beyond our location. We traversed one major ridge with extreme drops on both sides of the ridge, and then another, and another.

As we ascended, the wind grew stronger and stronger. I was uncomfortable wobbling on the edge of a high ridge with strong winds and I became fatigued. I sat and relaxed while the others scaled the highest dune in the area. At this point, I had taken off my shoes and was roaming the dunes barefoot. It felt so good to have the cool sand crunch beneath my soles with wind the only audible sound. Suddenly it began to drizzle and we all headed back to Furnace Creek to relax and have dinner. After a brief nightcap, we all dosed off after a long and exhausting yet adventurous day. 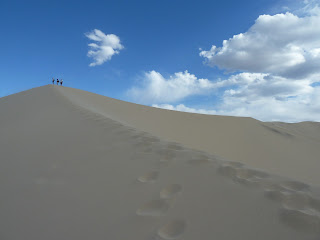 My brother’s friends took off early the next morning to return to San Francisco, a nine hour drive with a brief stop in Yosemite. Before leaving Death Valley, we had a half day agenda, some of it en route toward home. And we were blown away by our first stop, Dante’s Peak. We really only went out of curiosity but the stunning views over 5,000 feet above Badwater were truly amazing. 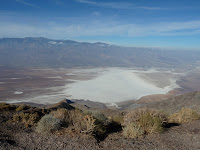 We hiked around the area and took in more views of the place that was one of my favorites of the whole trip. Next we saw a second view, even higher albeit not as impressive, the Aguereberry Point at 6,433 feet is a worthwhile excursion if in the general area, affording mountain views from the other side of the mountain behind Dante’s Peak.

We then drove to an abandoned Aguereberry Mine that once earned in today’s terms a whopping $12 million. We figured that thar mus be gold in deese hills!; and began to look for just one ounce, not to be greedy with prices currently hovering slightly below $1400 per ounce. The mine was cool. We climbed the structures and prospected about potentially finding goal in the surrounding hills with the right equipment. 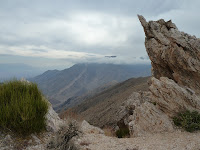 On our way out of the valley we made two final stops. First we went on a nice flat hike to Darwin’s Waterfall, a small yet nicely situated fall in a pretty location.

Then we left for our last stop, Crowleys Lookout, high viewpoint that afforded us our final mountainous views of the trip and then we were off en route to Los Angeles to have dinner, and strangely, to begin another work week in the big city. 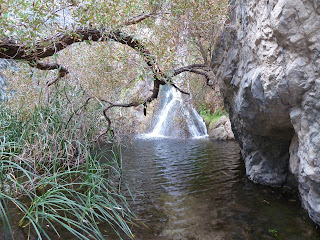 For those with only two days in the area surrounding Death Valley, visits of high priority can be broken into two days. Day one, visiting Badwater, Artists Palate including the surrounding areas and Dante’s Peak are musts. For day two, rent a jeep and head out to see the Ubehebe Crater, the Racetrack Valley, and the Eureka Sand Dunes.

What the hell is there to do in Death Valley? This is just the tip of the iceberg.

WeSaidGoTravel Interviewed by Johnny Jet!
For The People: Kamala Harris
Do You Want to be a Tremendous Travel Writer?
Are You Weirdly Obsessed with Southwest Airlines?

8 responses to “What The Hell To Do In Death Valley?”