The Water Palace in Granada 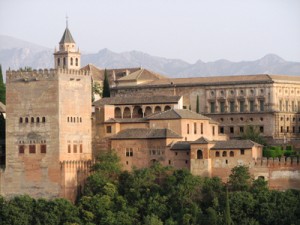 THE WATER PALACE IN GRENADA

When I was a student, I spent a year in France teaching English as part of my degree course. As chance would have it, I met a Spaniard called Jesús who I spent a lot of time with. He came from Cádiz , which is a coastal city in the southern region of Spain called Andalusia. He went to university in Granada, and I visited him on a few occasions after my time in France had ended.

Secretly, I was more interested in Spain the country than in him, but I was more than happy for him to show me around his native region, which, he proudly told me, is the most unique in the whole of Europe. He thought this because of the landscape and climate. In Andalusia, the heat is intense in the summer and there are palm trees and dry bushes nestling in a desert like, mountainous landscape. Compared to the luscious green trees and fresher climate of most of the northern European countries, Jesús thought that Andalusia was, like he imagined himself, a bit special.

One of the most unique parts of Granada is the Alhambra, which is a palace built by the Moors in the 11th Century. Its walls are peach colored and the fortress is set on a hill above the city. Aside from its marvelous architecture, the one aspect of the Alhambra that struck me was its fountains and water tracts. The Moors were an intelligent people, and, aware that southern Spain is a very dry and hot region, they constructed waterways in the palace that wisely made use of all the rain water that infrequently fell. Not a drop was wasted.

After visiting the palace, I spent a few days with Jesús and his family who were very welcoming despite my basic Spanish language skills. I remember brushing my teeth one morning and Jesús’ mother, a tall, wiry, blonde woman called Lola which is short for ‘Dolores’, ran into the bathroom and said something to me in Spanish. When I brush my teeth I always keep the cold water tap running – I’m from Ireland and water shortage is hardly ever a problem there. However in Lola’s eyes, it was a terrible waste of water, and she promptly turned the tap off while I apologized to her with toothpaste running down my chin. She had been brought up in the Franco era of Spain which was a frugal time for all concerned and she hated waste of any sort. Jesús told me that his grandmother used to make a meal of stale bread by soaking it in sweet hot coffee. I tried it and it was actually quite nice.

As I returned home on the plane, I remember looking out on the Sierra Nevada, the mountain range surrounding Grenada, and thinking how admirable their “waste not want not” attitude to life was. In an age where rampant consumerism in the western world is so disgusting, especially in the UK, it made me realize that to make the best of what you have is no mean thing, no pun intended. The Moors lacked water, but they found a way to keep the little they had abundantly flowing by constructing an intricate hydraulic system that was not only ingenious, but beautiful.

That visit to the Alhambra was one of the last times I spent with Jesús as his girlfriend. We have gone our separate ways since and I have not heart from him for a long time now. But I’ll treasure everything that I learned from him and his way of life – his guitar playing, his humor, his making the best of what he had and living with a special joy that I sorely needed having grown up in sectarian-torn Northern Ireland. Perhaps we all could learn a little from the Moors by celebrating what we do have, instead of mourning what we seemingly lack.

About the author: Catherine Robinson read French and German at St Hilda’s College, Oxford University, England. She is from Larne, Northern Ireland.