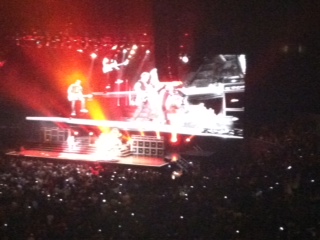 Ever since I heard the amazing guitar technique in the solo, “Eruption”, off Van Halen I, I have been an avid Van Halen fan and have studied Eddie Van Halen’s guitar technique for many years. At the time Van Halen took off, Guitar Heroes were Joe Perry of Aerosmith, Jimmy Page of Led Zepplin, and even Ted Nugent. But with the rise of Eddie Van Halen, rock guitar would be changed forever. Best known for his two handed hammer-on technique, his contribution of the “brown sound” and whammy bar technique were also formidable. After more than thirty years of thrilling guitarists and fans, Eddie’s guitar prowess did not let anyone down last night. In fact, the long Van Halen set included classic songs from the entire David Lee Roth CD collection including: Ain’t Talking About Love, Running with the Devil, Unchained, Hot for Teacher, Dance the Night Away, and Jump. Both Eddie and Alex Van Halen played impressive and extensive solos. Front man, David Lee Roth, was all about showmanship and entertained fans with long winded stories and sidebars. Overall the concert was enjoyable and We Said Go Travel are thrilled to see the majority of the band back together.