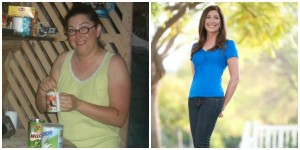 Thank you to Dani Stone for her article about my True Weight Loss Journey in Diets in Review.

Lisa Niver Rajna is a member of the prestigious Traveler’s Century Club, a unique group limited to travelers who have visited 100 or more countries. She enjoys trekking to new locales so much, she even co-authors a popular blog with her husband, We Said Go Travel. Over the last few years, Lisa has been hiking, biking, boating and walking across Asia but there was a time when she could barely walk a mile without feeling exhausted. She has so many stories she could write a memoir, and she did, but the adventure that gave Lisa the most satisfaction was her weight loss journey. Though it spans years and thousands of miles, it’s one of her favorite tales to share.

In 2001, Lisa was single, fit and working on a cruise ship. Then, the tragic events of September 11th enfolded. Subsequently, her company went bankrupt, she stopped traveling, moved in with her parents and turned to food for comfort. Her weight crept up so slowly, she actually argued with her doctor who told her, “I don’t care if your clothes still fit. You gained more weight.” After an honest self-assessment, she finally saw what the doctor was trying to tell her. Initially she started walking, and made it her mission to keep going until the weight came off. At the time, Lisa was a science teacher. ”For three years, I walked to work. It was two miles each way,” she said. “There were several other teachers (who were younger and lived closer) who all drove every day. When it was rainy, cold or dark, it was hard to keep going but I chose to walk.” She was making great strides in her weight loss when she met a man named George. Their whirlwind romance led her to join him on a year-long sabbatical in Asia. Shortly after their arrival she exclaimed, “I’ve lost 12 pounds, I’m skinny now.” When George replied that he hadn’t noticed, Lisa was angry but then realized that although the comment seemed brusque, he was right, she still had a long way to go before she felt fit and healthy again.

Determined to change her body and make it stronger, Lisa intensified her walking, hiking and also started keeping a food journal. When she returned to the United States 11 months later, friends and family didn’t recognize her. Her weight loss even caused some confusion with an immigration officer who thought she might be carrying the wrong passport. In one year, she had the adventure of a lifetime, lost almost 60 pounds and even got engaged – under water.

Lisa and George recently published a memoir about the year that changed both of their lives forever, Traveling In Sin.

After already achieving one of Lisa’s wacky weight loss goals, fitting into the pants of her, “tiny mother,” Lisa says she plans on maintaining her weight by walking, eating smaller portions, and hula-hooping. She swears the beloved childhood activity is great for exercise. She even bought one she can travel with.

What advice would Lisa give to someone struggling with weight loss? “Don’t give up! Dreams can come true. I lost the weight, I found my true love, and I spent months traveling in Asia. If you had asked me if I thought I could lose the first five pounds, I would have said, I will try but I am not sure. I lost more than fifty pounds after turning thirty-nine and have kept it off for over four years. I know you can do it!”

Buy our memoir, Traveling in Sin, from Amazon.