Fifteen Hours of Transport: Better than a day at work?

Fifteen Hours of Transport: Better than a day at work? This day I really wondered!

Some days on the road are post card perfect and some are full of transportation!

I was so sad to leave Gili Garden Bungalows on Gili Meno. After staying there for a week, I felt all moved in, if only there was a shelf or cabinet or anywhere to put my things. The snorkeling was so wonderful and the location and price so great ($20usd with breakfast), I did not care about all my things being on the floor. It was a turtle  party nearly every time we entered the ocean seeing five, six, eight turtles on each turn in the water.

We got up on our last morning before seven am to walk the half an hour to the other side of the island and catch the eight am once a day public boat to Bangsal. It was 10,000Rp ($1usd) per person to take this boat. A private charter was much more expensive and we decided starting the day early was smart. In the harbor, we ignored the touts and walked to the area after the cidomo horse carts, searching for group transport to Lembar for the ferry to Bali. We were skipping the speedy and expensive Gili Cat which runs about $45 per person in favor of the slow local transport.

For 60,000Rp each (about $6usd), we could take the public bus which was really just a van at nine-fifteen am. At nine-thirty am, they loaded about twelve of us into a van and dropped off a few in Senggigi, Mataram and then transferred us to another van to get to Lembar. We arrived at eleven-thirty am for the noon ferry, quickly grabbing nasi goring for 10,000rp each as part of the change for our two 36,000Rp ($4usd) tickets to travel for five hours from Lombok to Bali.

The locals basically shooed all the foreigners to the top deck of the ferry boat. While we were happy to be away from the incessant smoking, we were roasting in the sun with no likehood of respite for five more hours. With a sarong tied to the railing and our trusty umbrella we created a bit of our own shade to rest under. When we were within sight of the port and just about twenty minutes away from shore, the ferry stopped for nearly forty minutes. By then, it had been nearly ten hours since we left Gili Garden, and I was ready for dry land. 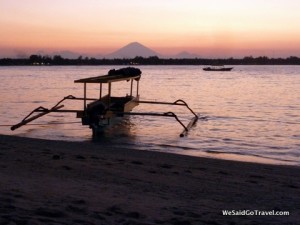 We could have stopped the madness and stayed in Padangbai for the night. I knew we wanted to be in Kuta before we went south to Bukit Pennisula as we had some errands to take care of in the big city. We walked to Perama and a bus was leaving that second for Kuta and Ubud. I said, “We are here. It is cooler to take the bus at night and less traffic.” So after George raced to the bathroom and they found us two seats, we were off. For another 60,000Rp each, we traveled nearly the length of Bali to arrive in severe traffic in Kuta. It was so bad, they just stopped the bus and said, “Go that way. If we drive it will take another hour or more.”

Since we had no idea we would travel all the way to Kuta in one day, we had no plan for a hotel for the evening. After seeing many poor choices which had either dirty sheets, stuffy rooms, terrible value for money or other problems, we stumbled into the Amazing Hotel on Poppies II at nearly ten in the evening. After a quick refreshing shower, we went out for dinner.

I was glad when we awoke the next day in Kuta ready to take care of business. It had been a long travel day but it was either going to be expensive in time or money to get from the Gilis to Kuta and since we are away for so long, we chose TIME! More about our day solving problems in Kuta soon.

Happy New Year News from WSGT
Guam: Swimming with Sharks and in Storms
Explore 10 Historic Sites in Canada for a Peek in the Past!
Honored by your SUPPORT: Niver's News: Jan 2022