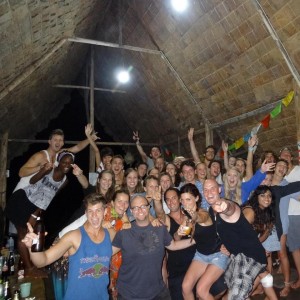 I was a month into my trip in Thailand when I fell upon the place that represents freedom to me.

This experience is something I always genuinely feel happy about, and actually privileged about being part of. Even more so I feel myself lucky to have experienced the time I did.

The feel of Pai instantly hit me as soon as I arrived. I instantly felt calm. I felt in a sacred location. Even I felt away from any sort of tourism. I felt the place I was at and the people I was with, created my of freedom. The people understood you, but more than normal travellers, they were happy for you and your life. You were happy for them.  The laughter, the honesty, the happiness, it really gave evidence of the travellers saying ‘Each to their own’.

Things such as lying in hammocks, listening to music, the beautiful sun, the breeze, waterfalls, fun drinking games, BBQ’s, frogs croaking,  and being in the rice fields whilst staying in huts all contributed. Where we were staying was a walk away from the main town, so it was on the outskirts. This added to the secluded feeling I had, but in a good way. It was ours and we were free. I felt that everyone who was there was meant to be there. It just fitted. Pai is notorious for a place for the more chilled out, hippie kind of backpacker. Of course the more its talked about the less like that it became. But at that time it wasn’t, I was free from everything I knew but at the same time casually entered this whole new world. It’s the closest I’ve ever came toParadise.   Every single one of us came to Pai for a reason. .We wanted something different.

My time in Pai was so special to me that I have thus far refused to head back. I don’t want to spoil that memory it was so special to me. I just felt that I had found what I was looking for. Another instance of how free I felt actually occurred at the time whilst I was in Pai. I had a dream that everyone had left and I came back, to find no-one at all there, just me walking through the main lounge spot. There were empty drinks, hammocks and a cold quiet feel about it. I remember waking up, whilst still in Pai of course, thinking shocked, because those kinds of dreams are normally after you leave a place. That was very unique. It stuck in my mind a lot.

I realised Freedom isn’t something we can always fully feel, but in these days, with these people, in this town, I felt special. I felt freedom in myself, but because of these people, I felt we were one. People acting themselves in a place in the world where they could. It felt real. It felt like our community, all staying at Spicy Pai.

There is one picture as below which sums up the experience for me. It’s almost like the end of the famous ‘Beach’ movie, where all those travellers are shown together, in their ideal spot with the picture being named Parallel Universe. This picture attached had the same feeling. I have a tattoo that says Lleno De Vida. This is exactly what this image is. Full of Life.

I still dream about living like that again, for the longer term. With a group of travellers who naturally get on, from all over the world. A mix of guys and girls living as one together. Hopefully one day I’ll find that again, maybe that was my time. But at the time I’m writing to you about right now we were travellers, full of mixed nations, different cultures, and we achieved that one thing which is freedom. Freedom in Pai.

About the Author: Tommy Walker travelled to sixty destinations in ten Asian countries in 2013. He loves travelling, acting, and soccer. His favorite thing is meeting new people and sharing new experiences. Currently in Melbourne, Australia, he has plans for a trip starting in Brazil and all through South America in 2014. Join one of Tommy’s amazing Asia groups on Facebook.