Tea for two In Jordan 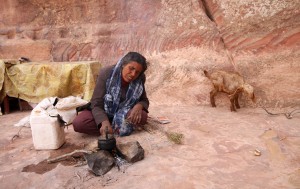 Jordan, as framed in the neat oval of a Boeing 737 window, resembles Tatooine from the sky: a sea of rusty red sand, canyons and jagged mountains. As viewed through the windshield of a Citroën C3 sedan cruising Highway 15, the landscape is monochromatic, the sky a hazy gray. There are signs of civilization in the scattering of low, cement-block houses, but the single constant show of human habitation are the steely-faced traffic officers conducting impromptu roadside checks.

“Do you know of any place in the U.S. like this?” I asked my husband as we drove along.

“No, but if I was shooting a sci-fi, Star Wars-like movie, I’d definitely consider this,” Matt said.

But it was actually the Tunisian desert that stood in for Luke Skywalker’s home planet in the sci-fi franchise. Petra didn’t cement its spot in cinematic pop culture until 1989, when its Al Khazneh tomb (popularly known as “The Treasury”) served as the resting place of the Holy Grail in “Indiana Jones and the Last Crusade.”

The Treasury’s fame, however, somewhat betrays the grandness of Petra as a whole. In reality, the Treasury is simply an elaborate façade, a single monument among hundreds in a 264,000- square-meter complex. The Nabataeans, members of an ancient Arab tribe, created this city in stone more than 2,000 years ago. Most of the structures that still remain, including the Treasury, are tombs carved into the red sandstone hills.

It was while searching for the path to the Treasury overlook that Matt and I spied a small herd of goats nibbling on the sparse desert vegetation. I followed and photographed the animals as they ate.

Suddenly, the goat’s bleats were answered by a guttural, human response. I turned to see a middle-aged Bedouin woman crouched above me on the platform entrance of the tomb for Sextius Florentinus.

The woman quickly switched from goat to broken English when she noticed Matt and I.

Curious about the woman’s culture, Matt and I mounted the steps of the tomb platform. We expected to see some sort of concession stand but were instead confronted by a trio of blackened, ashy rocks arranged atop the sandstone. Our host motioned for us to sit beside the rocks, and we watched as she began collecting and breaking sticks to rekindle her fire. Periodically, she’d venture to the far corner of the platform, cup her hands around her mouth and shout a single Arabic word. It sounded like a name.

“ABIR!” she called, her voice echoing through the canyon.

Satisfied with the stick arrangement, the woman produced a BIC lighter from a pocket and set the wood aflame. She then poured water from a white plastic jug into a tiny weathered teapot she rested atop the fire.

As we waited, a small figure, a little girl about 3 years old, rounded the outside of the tomb and made her way toward us. The child’s unwashed hair stood on end. She wore unzipped jeans, a dirty pink sweater with a large hole in the front and a pair of too-large, unzipped canvas boots.

Smiling sheepishly, the girl set to peddling her family’s wares: postcard sets of Petra. When we politely declined, she stomped off and, with practiced skill, threw her arms around the spindly legs of a black and white kid. She carried the goat back to the fire and repeatedly body slammed him toward her lap to make his legs fold into a reclining position.

And still the water had not boiled.

Like her mother, the little girl would periodically venture to the far corner of the platform and shout a name across the canyon. She did this about three times before a teenage girl, presumably her sister, emerged. As a berry picker lugs her haul from bush to bush, this girl dragged a large bucket. Her haul, however, was not berries but rocks. Sandstone rocks she desired to sell to us.

I showed the teen the rocks already in my shoulder bag, the ones I had just collected from the same canyon floor. No, we didn’t need to purchase any rocks.

Was the tea ready yet?

It was. Syrupy sweet, the concoction tasted like sugar water.

Careful not to offend our host, Matt and I drank it all and then paid the woman five times the set price for her trouble. Delighted, the teen presented us with a rock — on the house.

Many months later, while cleaning out my shoulder bag, I uncovered a handful of colorful sand – all that remained of the soft rocks — embedded in the inside folds. The discovery made me smile.

Home in the USA: Where Inspiration Never Stops
Transylvanian Time Travels in Romania
One Horned Rhinos and Kaziranga N.P., India
Malapascua: Remembering Eternity in the Philippines