Tainan, Taiwan: Can I help you?

“Can I help you?” is a great thing to hear while traveling. At home, I rarely hear anyone offer to help. Over the last two years on my two-mile walk home to and from school, I have called 911 several times after a traffic accident. I am trained as a first responder from working on cruise ships, at camps and at schools.

It would not occur to me not to call but each time a by-stander or someone in the accident is so thankful that I called and helped at the scene. It shocks me that someone would not call or step up but most people don’t.

I do notice while we are in a foreign country how much I appreciate someone offering his or her assistance. In Taiwan, any time we looked lost even for a moment a kind person offered to help us. From the moment we exited the Metro in Taipei, a woman appeared and walked us to Chiang Kai Shek Memorial. She turned out to have family in Orange County only an hour from our home.

While walking in Tainan when we could not find Chikan Towers (which was literally one more block to our left, but I felt very lost and frustrated), a man in the noodle shop said in English, “Can I help you?”; I was so happy; I felt like someone threw me a life ring and I was no longer drowning and alone. I had been navigating our day in Tainan and just could not figure out where the next place was although I knew we were so close.

The nice noodle man helped us order noodle soup with no meat and even offered us a nearly 50 percent discount on our meal since there was no shrimp. Taiwan has been an amazing destination for the great sites and clean streets but also for the friendly people who have wanted to speak English with us and just get to know us, not to sell us anything. 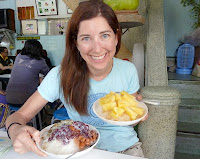 Video: Tasty Tainan
At Lily’s fruit Bar, we ordered by pointing at the food of others around us but the woman did seem used to tourists and later her son spoke to us in English. He had spent ten months in San Francisco. We told him he spoke well but like all the others we spoke to in English; he disagreed with us. The red bean and ice creation was sweet and the pineapple was delicious. The food was so unique to us that we just had to video tape our meal!

Our hostel, the Tainan Teachers Hotel, formerly Confucius Hotel (the name in the Lonely Planet and across the street from the Confucius Temple), offered us a huge discount which we gladly took and it even included breakfast and a great map of the area. I was surprised when I opened the drawer in the desk and it contained the “Book of Buddha”; and a condom called “Safeway.” You just never know what you will find in a hotel room!
I highly recommend visiting Taiwan, the people are friendly, the transportation system is incredible and the sites are superb. Our next post will include stories and videos of children we met and spoke with on the streets of An Ping and Beitou.

Article first published as Tainan, Taiwan: Can I help you? on Technorati.

Seven New Years Together: Love, Celebrate, Grow
TELL ME MORE ABOUT: FIJI
What is Your Biggest Transition Regret?
Can You Get Your Passport Stamped Inside Italy?

3 responses to “Tainan, Taiwan: Can I help you?”