Sri Lanka: The Footprint Atop the Earth 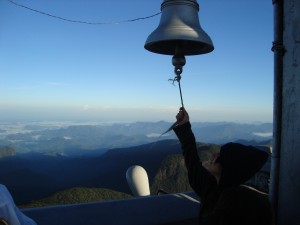 In 2009, shortly after my seventeenth birthday, I found myself at the top of the world gazing over Eden.

I was living in Sri Lanka, and on being asked if I wanted to climb Sri Pada (also known as Adam’s Peak), I was never going to say no. Sri Pada is a mountain with a history and religious significance appreciated around the world. It is specifically renowned for the giant footprint, nearing six feet in length, embedded at its peak, the origin of which is disputed but widely revered. Buddhists believe it to be the footprint of Buddha, Hindus of Shiva, and Christians and Muslims believe it to be the footprint of Adam when he first stepped onto Earth.

On the day of our climb, I got home from school, packed my bags and was ready to make the four hour drive to Muskeliya, from which we would head on to the foot of the mountain. I was accompanied by my close friend, George, who had done this trek twelve times before. We set off at two thirty in the morning, leaving about four hours to make it up the mountain before sunrise. I was nervous. I had stupidly not slept or eaten before embarking on this endeavour and I was not an especially fit person. The steps were steep and seemingly endless and I was repelled by the idea of not being able to make it up; of having to sit on the stairs, shame-faced, waiting for the others to return. But George was my veteran and stuck by my side the whole way, promising I would make it up before sunrise, no doubt. And in the end, I did.

We found a place to sit atop an old derelict building, squashed between tourists and pilgrims alike, and awaited the sunrise together in the cold, crisp air. Music blared out of speakers; the sounds of prayer and homage. When the sun peaked over the far distant hills and lit the valleys below, I felt the breath catch in my throat. It was beyond what I had expected, and after that miserable upward journey, I had expected a lot. The lakes shone silver and the clouds burst into flame. There was a total calmness to it, an absolute tranquillity. I felt detached from reality, like I finally understood T.S. Eliot’s line about being ‘at the still point of the turning world.’

Now admittedly, I’d spent the majority of my life declaring myself entirely faithless, but when I was up there, watching the sun rise over the mountains and gazing down at the valleys and lakes so far below me, I believed every one of those stories. It was more than possible to me that I was standing in Eden and that I was viewing the world from the point where the first human viewed it. That the giant footprint had indeed been made by Buddha and by Adam and by Shiva. That Sri Lanka was the garden of Eden and the birthplace of all humanity. Nothing seemed so plausible.

When we finally tore ourselves from the sunrise, we turned to the North-West side of the mountain to experience Sri Pada’s other famous landmark; it’s shadow. The shadow of Sri Pada is unique in that it no way resembles the shape of the mountain. It falls across the forests as a perfect pyramid, its two sides forming eerily straight lights tapering to a point that doesn’t exist on the actual mountain, which is rounded and misshaped. Scientists don’t understand it, nobody seems able to explain it. Yet somehow it just fits into the overall mystique and miraculous atmosphere of the ancient mountain.

With the sunset, the shadow and the footstep behind us, we turned to the last site Sri Pada had to offer; the bell that travellers can ring, once for every time they’ve made the climb. I rang it once proudly, feeling it was an apt representation of the triumph I felt. Then my friend George went and rang it thirteen times, much to the surprise of the crowd who couldn’t believe he had climbed the peak that many times and thought he had simply misunderstood the bell’s meaning.

Then, the descent. Most of the people I know informed me that going down was far more painful than going up as it’s harder on your leg muscles. Well, I pretty much ran down that mountain without feeling a thing. I was elated. Ecstatic. I’d made it to the top, I’d seen the sunrise and the shadow, and I felt in-vinc-ible. Sadly, this mentality died almost the second I reached home. My legs turned to jelly and I was literally unable to stand for two days. But oh well. No matter. I’d seen the face of Eden… and it was glorious.

About the Author: Angeleen Renker is a 20 year old aspiring writer. She plans on spending the rest of her life drinking gin, travelling to far off lands and trying to read as many books as humanly possible. She also hopes you have a truly splendid day.

Sri Lanka: To Go or Not To Go?
Indonesia: Within a breath of the Komodos
Yubeng Villages, Meili XueShan OR How to Avoid Spending a National Holiday with a Billion Chinese
France: Awe and Tears at the Zoo

One response to “Sri Lanka: The Footprint Atop the Earth”